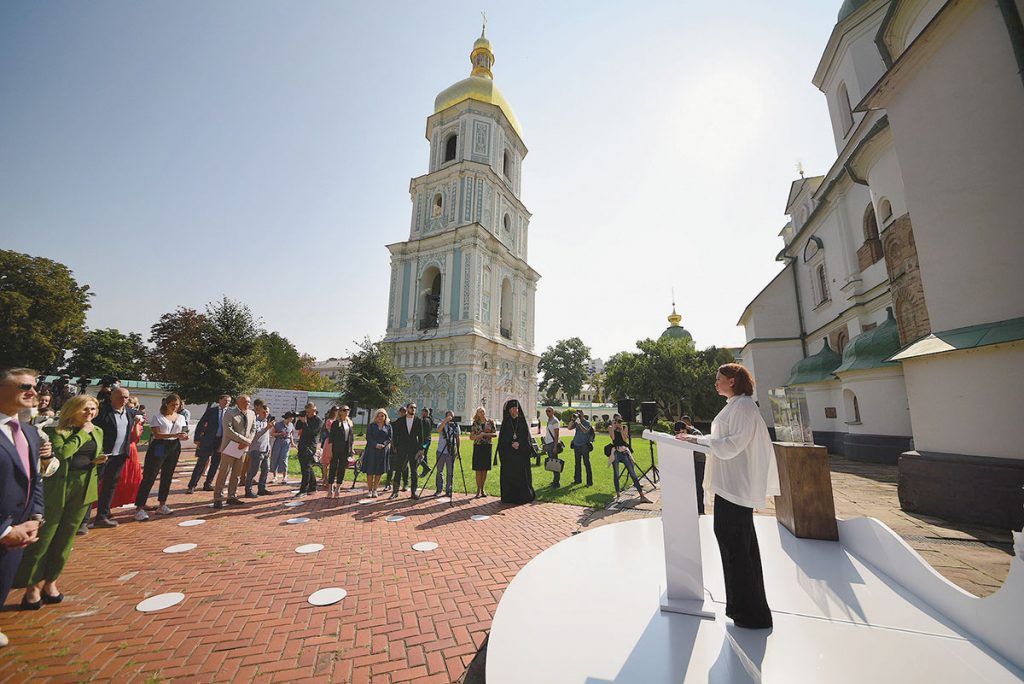 Zagoriy Foundation
Speaking at the presentation of the new technology installed in the St. Sophia Cathedral complex in Kyiv to preserve the 11th century landmark is Kateryna Zagoriy, co-founder of the Zagoriy Foundation, which co-sponsored the preservation project.

KYIV – The administration of the National Sanctuary Complex “Sophia of Kyiv,” together with patrons of the historic preserve’s renovation, on September 16 presented a project to drain the foundations and walls of St. Sophia Cathedral and adjacent monasteries of excessive moisture, thus saving them for future generations.

The process is to be implemented with innovative Swiss equipment, called the BioDry system, that is used for natural restoration of a proper level of humidity. The equipment will help restore the microclimate in the cathedral buildings and eliminate excessive moisture. Similar technology is used to preserve cultural heritage sites around the world.

St. Sophia Cathedral is one of Ukraine’s most significant historical monuments; it is included on the UNESCO World Heritage List. The cathedral is a spiritual center in which the Ukrainian people’s unique heritage of the last millennium is concentrated.

Thanks to patrons who restored the cathedral during different historical epochs after hostile invasions and natural disasters, its ancient architecture and the world’s most complete ensemble of original mosaics and frescoes of the 11th century have been preserved.

“St. Sophia Cathedral is at a very venerable age and is sick. Our city’s urbanized environment has a bad effect on her,” said Nelya Kukovalska, director-general of the National Sanctuary Complex “Sophia of Kyiv.” “This is an important place for our country, and we will do our best to make Ukrainians happy as long as possible. For a thousand years in Sophia, the waterproofing of the walls collapsed, and today there is a capillary suction of moisture, and the material is slowly being destroyed. Many technologies can help drain walls, but they all imply their destruction, and we cannot allow that,” Ms. Kukovalska explained during a briefing on September 16.

A total of 14 devices have been installed, covering the entire complex of buildings of St. Sophia. In Ukraine, such systems are currently in use only on two sites of the Kyiv-Pecherska Lavra (Kyiv Monastery of the Caves).

“The equipment installed in St. Sophia Cathedral has proved its effectiveness,” said Yehor Zhuchenko, director of BioDry Ukraine. “It has been saving cultural heritage sites around the world for more than 10 years: Masino Castle in Italy, Malbork Castle in Poland, the Enzo Ferrari Museum. And I am very glad that, thanks to philanthropic help, Sophia of Kyiv is among them.”

“The moisture in the reserve walls exceeds the norm by about three to four times, in some places – five times. We expect that this figure will drop by about three times in the first year, and in three years, it will completely return to normal. This technology allows walls to be drained naturally, without resorting to construction work, while maintaining the integrity and original structure,” explained Mr. Zhuchenko.

The device dampens the electrostatic potential, which causes water to rise to the surface. Water returns to the ground by gravity. Afterwards, the wall dries naturally. Using the BioDry system, the structural integrity of walls remains intact and no cumbersome construction work is required; thus, the service life of the building is not negatively impacted. After drainage, it is possible to observe the normalization of the humidity level and the elimination of conditions for pathogenic microorganisms. As a result, the building is brought up to proper sanitary norms.

“It is a real miracle and joint achievement of Ukrainians that we managed to preserve this 11th century cathedral,” said Kateryna Zagoriy, co-founder of the Zagoriy Foundation, which co-sponsored the project together with two pharmaceutical companies, Darnytsia and Interchem. “We have to thank scientists, builders, renovators, museum staff for this. And, of course, patrons of all times. It is a great honor for us to join their work.”

“The reconstruction of St. Sophia under Ivan Mazepa was a symbol of Ukraine’s restoration after the Ruin. I am confident that this joint project will be another important step towards restoring the culture of charity in our country,” she added. [The Ruin was a period in the late 17th century that was characterized by the disintegration of Ukrainian statehood and general decline, notes the Internet Encyclopedia of Ukraine.]

Though Metropolitan Epiphany, primate of the Orthodox Church of Ukraine, was expected at the project’s presentation, he was unable to attend because of the funeral of one of Kyiv’s most respected clerics, said Yevstratiy Zorya, archbishop of Chernihiv and spokesperson for the Ukrainian Orthodox Church.

“It seems that from the 21st century you plunge into eternity when you enter Sophia of Kyiv,” Archbishop Yevstratiy began his address. “This spiritual power has always been felt here, even when all this could not be officially said and acknowledged. And [it is felt]especially now, when services are held here again and prayers are heard.”

“Here, on Independence Day, representatives of all denominations held a joint prayer for Ukraine. This is a good tradition that shows peace and harmony among all religious organizations in our country. St. Sophia unites the Ukrainian people in this as well,” the archbishop said.

He continued: “But, at the same time, in addition to the spirit, there is also the body. And this body is of a respectable age, so it needs special care. We need to preserve Sophia for posterity so that people know that Ukraine did not appear 30 or 100 years ago, but much earlier. That they may remember that the Ukrainian Church did not appear when we were given the Tomos, but was here a long time ago. Here is St. Sophia, which is 1,000 years old,” underscored Archbishop Yevstratiy. He went on to thank patrons for their support of the historic religious complex.

“Physicians and museum workers have one important mission in common: to take care of health,” said Ms. Kukovalska of the sanctuary complex. “In the medical sphere, it is the health of people, while for us, museum workers, it is the health of monuments. So, we are sincerely grateful to our patrons that they are expanding the horizons of treatment and giving a ‘magic pill’ to Sophia of Kyiv.”