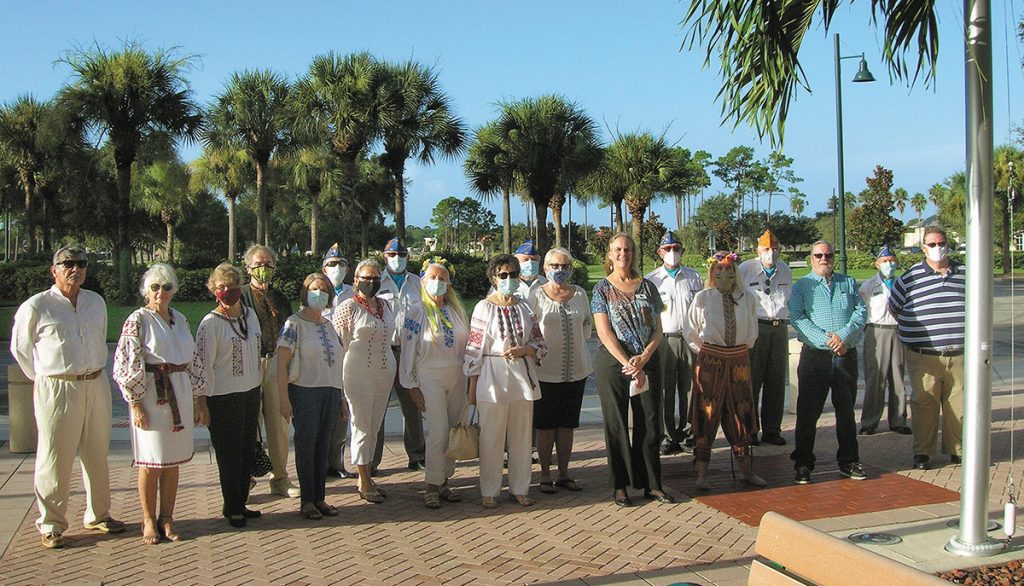 Bohdan Bodnaruk
Ukrainian American community members with commissioners of North Port during the ceremony outside the City Hall; ninth and 10th from left, respectively, are Mayor Debbie McDowell and Vice-Mayor Jill Luke (in Ukrainian embroidered shirt).

Debbie McDowell, mayor of North Port, read the proclamation that designated August 24, 2020, as Ukrainian Independence Day in the city. She stressed that Ukrainian people today are courageously fighting Russian aggression to protect their eastern borders, and work hard toward establishing Ukraine as a true democracy.

Daria Tomashosky, president of Ukrainian American Club of SW Florida, thanked the mayor and the commissioners of North Port for their enduring support. She expressed hope that next year, for the 30th anniversary, the Ukrainian community can have a more joyous celebration than this year (without the coronavirus).

Because of the coronavirus pandemic, it was not possible to have a real celebration of this joyful day with a reception at St. Andrew’s Ukrainian Religious and Cultural Center, as was done in the past. Even at the solemn raising of the flags at City Hall only leaders of Ukrainian American organizations attended because the total number could not exceed 15 persons and all had to wear masks.