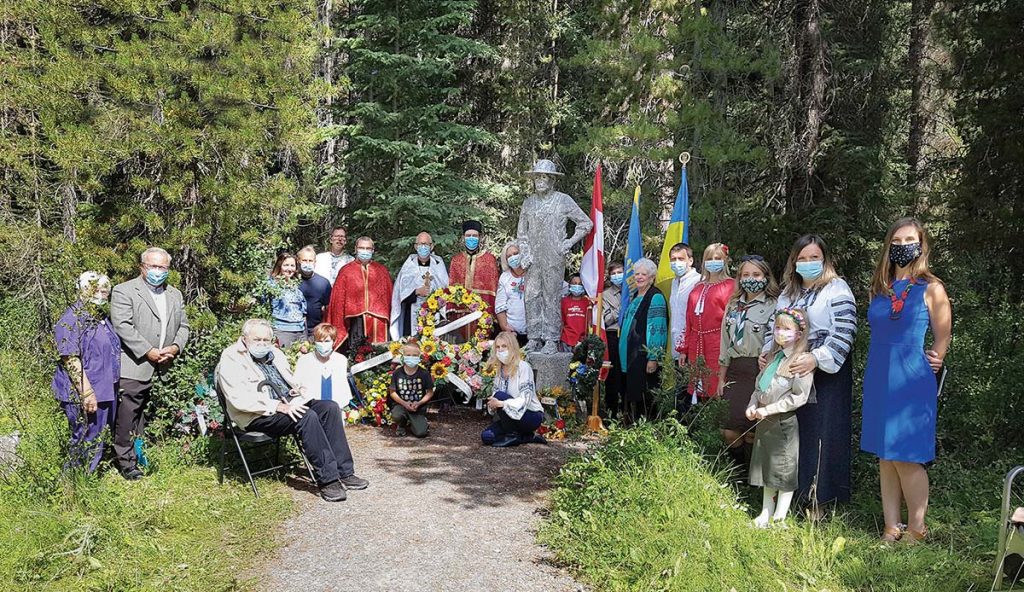 Inna Platanova
Participants of the 25th anniversary of the unveiling of the statue and plaque at Castle Mountain Internment Camp.

CALGARY, Alberta – This year marks the 100th anniversary of the end of Canada’s First National Internment operations of 1914 to 1920, which saw more than 8,000 immigrants – the majority of whom were of Ukrainian origin – imprisoned as “enemy aliens” in 24 internment camps across the country. Another important milestone was marked on August 12: the 25th anniversary of Canada’s first statue and trilingual bronze plaque, placed near Castle Mountain, Banff National Park, in memory of those held at that internment camp from July 1915 to July 1917.

The Castle Mountain camp was the first of the camps to be located in a dominion park (national parks, as they are known today). Internees were exploited for forced labor, including the completion of the road to Lake Louise, landfilling and draining of recreational grounds, the clearing of bison paddocks, trail cutting, reclaiming land for recreation activities, rock-crushing and the quarrying of stone (to be used for the building of the Banff Springs Hotel and public works infrastructure projects).

Master of ceremonies Ulanna Wityk (UCC Calgary Branch) provided an overview of the internment operations and spoke of the camp’s establishment, as well as the meaning behind the monument on the site. The sculpture by artist John Boxtel that is titled “Why?” depicts an internee and signifies symbolic redress for the mistreatment of the internees at the Castle Mountain Internment Camp.

Halya Lypska Wilson spoke of UCC’s efforts in fund-raising for the statue and plaque. Finally, Donna Korchinski spoke about her step-grandfather, Harry Levitsky, who was interned at Castle Mountain, but who spoke very little of that experience throughout his life. She movingly underscored the importance of forgiveness and education.

The ceremony continued with representatives from Calgary’s Ukrainian Canadian organizations laying wreaths at the monument; it concluded with the singing of the Canadian and Ukrainian national anthems.

The 25-year-old monument encourages us to remember and educate those unaware of the victims of this injustice 100 years ago. The Ukrainian Canadian community is committed to continuing ongoing efforts to educate Canadians about World War I internment in Canada, and to commemorating the victims of this dark historical chapter in hopes that the bitter lessons will forge a brighter future.