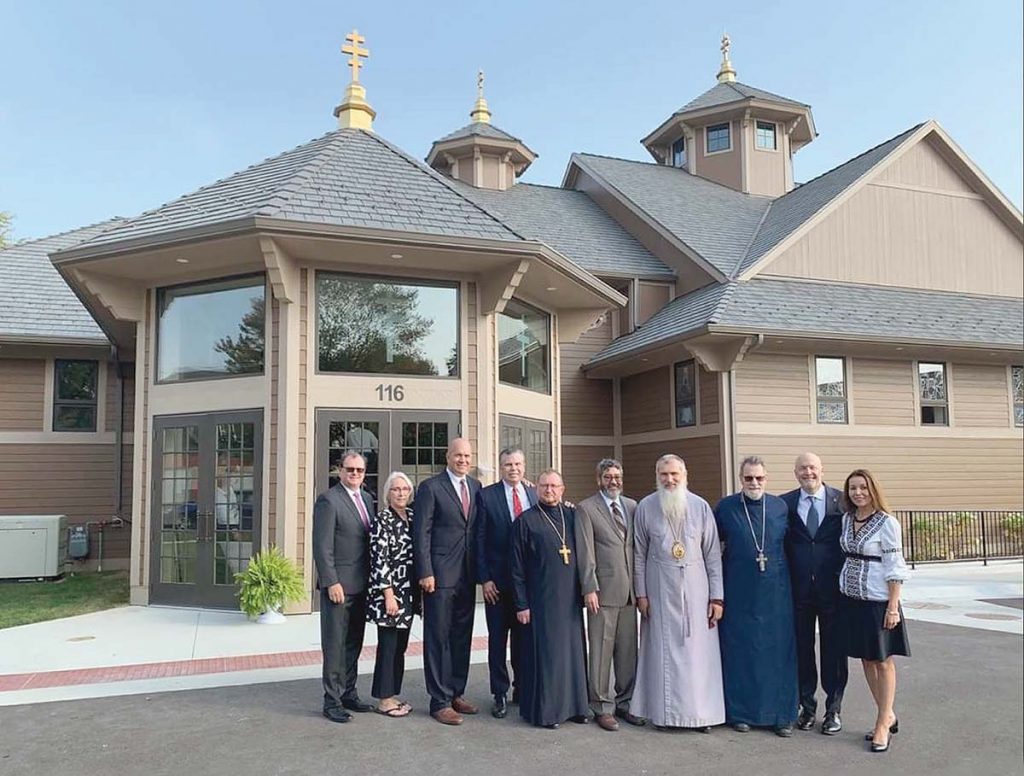 PALATINE, Ill. – A long-anticipated day for parishioners of Immaculate Conception Ukrainian Catholic Church in Palatine, Ill., came on October 10, when the parish’s new church and shrine was consecrated by Bishop Benedict Aleksiychuk.

In addition to being a church, it is also designated as the Eparchial Shrine of the New Martyrs of Ukraine for the Chicago-based St .Nicholas Eparchy.

“The late Bishop Richard Seminack told us that he wanted our parish to be an eparchial shrine. We hope to have many spiritual events and pilgrimages planned. Аs engraved on the cornerstones blessed by Patriarch Sviatoslav, it is designated as ‘a house of prayer for all nations,’ ” said Father Mykhailo Kuzma.

The day started with Bishop Benedict announcing that Father Kuzma had been elevated to mitered archpriest. The bishop then presided over the “Rite of Consecration of a Temple” and the divine liturgy.

“The Ukrainian community in the northwest suburbs [of Chicago]has grown substantially over the past decade. We need our church to be big enough to serve the spiritual needs of the community. This is a day that many of us have prayed for,” said Stefko Kuropas, president of the Parish Council.

The new church is designed in the style of a traditional Hutsul wooden church. Architect Joseph Mycyk took his inspiration from the church’s Hutsul bell tower that had been erected in 1988 by the original founders of the parish. Mr. Mycyk was able to design the new church around that bell tower, making it one of the focal points of the new design and miraculously without having to move it from its original spot. This created a beautiful transition between the old church and the new church.

Tragically, Mr. Mycyk succumbed to cancer two months before the blessing of the new church but his vision, creativity and attention to detail will remain in the church for generations to come. His widow, Natalka Mycyk, was in attendance for the consecration.

The opening has been a goal for Michael Panko and Building Committee members for the past 10 years. “We all loved the old church, but we needed the added space. We are able to seat twice as many people in the new church and we expect additional growth,” said Michael Panko, president of the Building Committee.

Parishioners are not alone in the excitement of having a new edifice.

“We have been working with Immaculate Conception for many years now, and that cooperation has only grown with the Chervona Ruta Festival that takes place every June. Palatine has truly become a Ukrainian community center,” said Myron Wasiunec, president of the American Ukrainian Youth Association of Palatine.

Associate Pastor Father Yaroslav Mendyuk joined Immaculate Conception in 2015 and had an immediate positive impact on the church and its Building Committee. “I was thrilled when I was assigned to Immaculate Conception because I could see all the great blessings that would come with a new church. I wanted to be part of the project and to be able to tell people that I helped build a church” said Father Mendyuk.

For several hundred people, this day will not be forgotten.