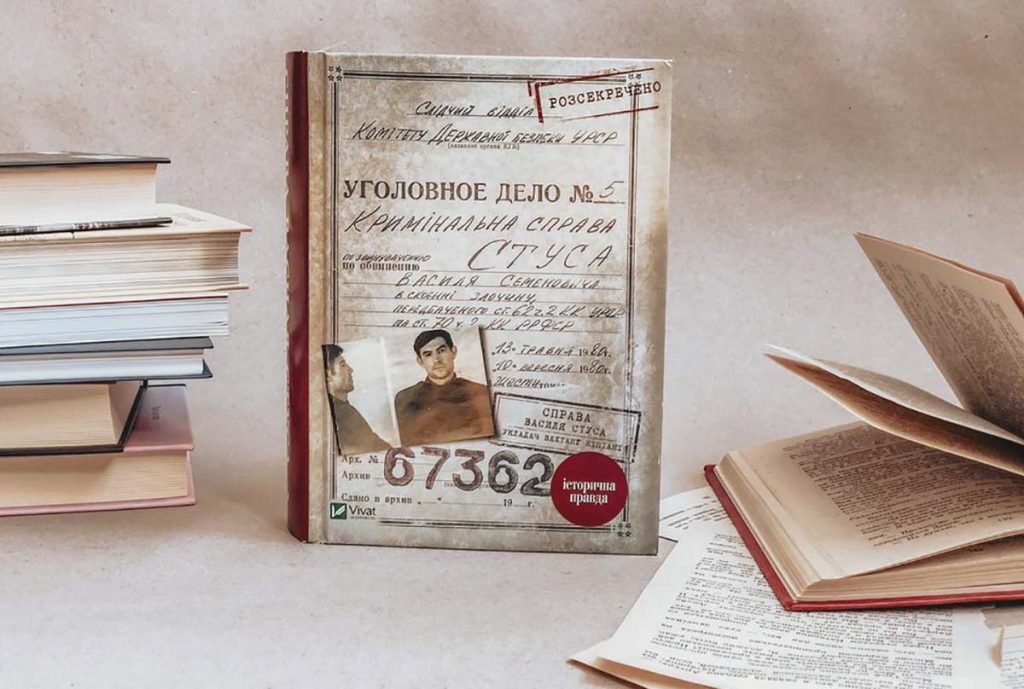 Vivat Publishing
The cover of “The Case of Vasyl Stus” by Vakhtang Kipiani.

KYIV – When Soviet-era Ukrainian dissident Vasyl Stus died under mysterious circumstances in a high-security Russian labor camp near the Ural Mountains on September 4, 1985, it had been 20 years since his poems were last published in the USSR.

Now, a book about the last five years of his life is at risk of being pulled off store shelves and from online shopping carts after pro-Russian lawmaker Viktor Medvedchuk won a libel case against the author on October 19 in a Kyiv civil court.

Judge Maryna Zastavenko ruled to halt the further sale and distribution of “The Case of Vasyl Stus” until six of nine passages in the book that the plaintiff asked to be stricken had been removed.

The author, Vakhtang Kipiani, also was ordered to pay $27 in court fees and said he was muzzled from talking about Mr. Medvedchuk without the politician’s permission, which went beyond the parameters of the plaintiff’s lawsuit.

“This is sickness, Medvedchuk didn’t even demand this [ban on speaking about him]… our lawyers think this is absolutely abnormal, or she [the judge]gave a reason for the case to be overturned during an appeal, which we plan to file,” Mr. Kipiani told The Ukrainian Weekly over the phone.

He underlined that the prohibition against speaking about the plaintiff was a “direct violation of freedom of press and speech.”

Over the next 24 hours, the nearly 20,000 remaining copies of the book were sold out.

Mr. Kipiani’s publisher, Vivat – also a defendant in the libel suit – said it would do another print run before the ruling goes into effect, which is within 30 days of the appeal’s due date.

Mr. Medvedchuk, who was Stus’s Soviet-appointed public defender in 1980, took issue with nine phrases that he alleged slandered him.

Following the lower court’s ruling, the lawmaker’s press secretary, Oleh Babanin said: “The law is on our side. The court ruled to protect the honor, dignity and business reputation [of Medvedchuk], and this decision must be implemented.”

One of the phrases Mr. Medvedchuk sued to have stricken calls him “an errand boy of the Communist system,” for example.

In previous interviews, Mr. Medvedchuk, who previously headed the presidential administration of Leonid Kuchma, has described certain passages in the book as the “author’s subjective conclusion.”

A history journalist, who has written about dissidents for much of his career, Mr. Kipiani said it’s “not illegal or legal to like someone.” He added that 90 percent of the book’s research was based on archived KGB documents located in Kyiv.

Mr. Kipiani noted that when Stus was being tried a second time for “anti-Soviet agitation” and for joining the Ukrainian Helsinki Group, the poet refused to recognize the legitimacy of the Soviet court trying him.

Mr. Kipiani asserts that “Medvedchuk could’ve recused himself after such a request, yet he refused.” The author added that over all Mr. Medvedchuk acted “unethically as a lawyer” during Stus’s second trial.

In previous interviews, Mr. Medvedchuk rejected the allegations, including accusations that he enabled Stus’s conviction, saying: “I can look Stus in the eyes and say I am not guilty – on the outside and inside – and I never felt any sense of guilt.”

The court’s ruling caught the attention of President Volodymyr Zelenskyy.

Since “this book is an elaboration of a real repressive criminal case against Vasyl Stus, which was initiated in the USSR and for which he was convicted, we consider it strange to define the plaintiff Medvedchuk VV as a ‘character (actor) of the work,’ ” Mr. Zelenskyy’s office said. “Most of the content of the book is an accurate reprint of the criminal case. That is, the purely documentary basis of the book does not elicit the slightest doubt.”

The book’s publisher, Vivat, made a historical analogy by saying “the court is direct and blatant proof that the case for which Stus fought still isn’t completed.”

Mr. Medvedchuk has a history of suing high-profile politicians, activists and journalists for defamation. For example, he sued former lawmaker Hanna Hopko for the symbolic sum of 1 hrv two years ago for a critical post she wrote about him on Facebook.

He currently heads a pro-Kremlin, 44-member faction of Parliament called Opposition Bloc – For Life, many of whose members supported former President Viktor Yanukovych.

The politician has been under U.S. and Canadian sanctions since 2014 for his role in Russia’s forcible seizure of Ukraine’s Crimean peninsula.

Ms. Zastavenko, the presiding judge over the defamation case involving the Stus book, has been investigated by the Security Service of Ukraine (SBU) for “systemically” making frequent trips to Makiyivka in the occupied part of Donetsk Oblast. The High Qualification Commission of Judges in October 2017 announced it had suspended disciplinary proceedings against the judge.