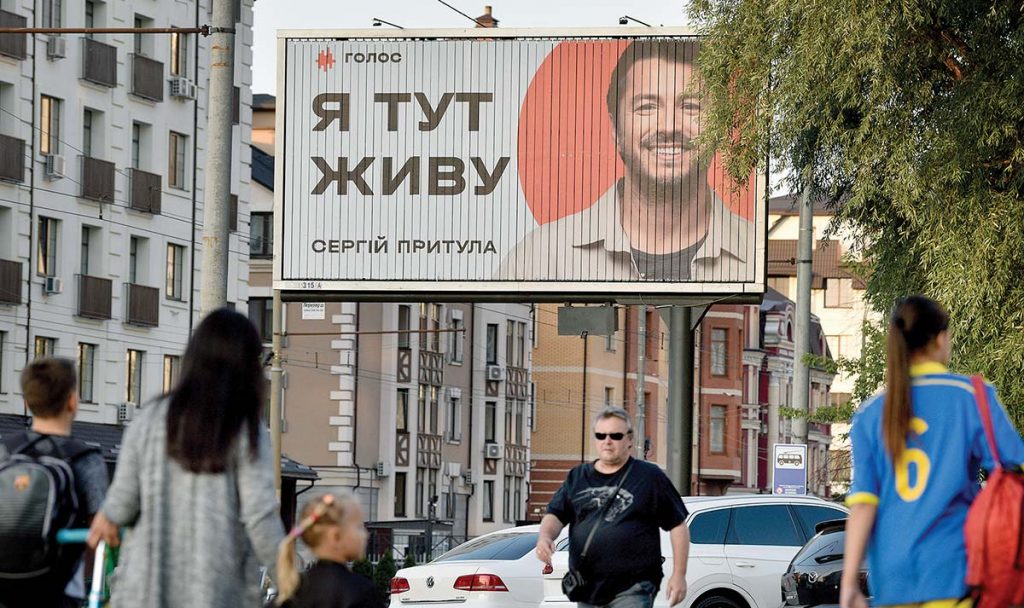 Maxim Polishchuk/UNIAN
A billboard in Kyiv for a candidate from the Holos party, Serhiy Prytula, reads: “I live here.”

KYIV – On September 5, Ukraine officially entered the electoral period during which candidates and parties are allowed to campaign. Fifty days later, on October 25, local elections will take place across the country. For the first time, voters will choose leaders of united territorial communities, a new form of the administrative cell created by decentralization reform. As in previous local elections, Ukrainians will also elect deputies to village, settlement and city councils, deputies to raion councils, and deputies to 22 oblast councils.

Due to the temporary occupation of Crimea and some districts of the Donbas region, no elections will be held in the Autonomous Republic of Crimea, Sevasto­pol, and the temporarily occupied parts of Donetsk and Luhansk oblasts.

The local elections of 2020 will be historic because of many firsts. Decentraliza­tion, gender quotas and budget allocation are among the key topics everyone will discuss in October.

Lurking in the background of the reformed electoral process is the COVID-19 situation: citizens will vote in their districts despite the pandemic.

The Ministry of Health and the Central Election Commission are developing a special algorithm for compliance with anti-epidemic norms during Ukraine’s local elections in order to make it as safe as possible for both commission members and voters.

The 2020 local elections are the first to occur since the new united territorial communities were empowered. As a result of decentralization, Ukraine’s smallest administrative cell is a united territorial community (UTC) that encompasses either a city or a union of villages. The UTCs largely replaced raions. However, in some cases, people did not manage to form a UTC on time or because of legislative reasons, so there will be elections to raion councils in some places.

As a result of these reforms, united territorial communities will retain most of the taxes collected from both citizens and local businesses in order to implement programs and projects in their areas. These are the funds that communities will spend on infrastructure, education, medicine and other local priorities. Prior to this, most taxes went to the central government and then were returned to local authorities after the budget process – but in much smaller amounts.

“On billboards and TV commercials, you do not always understand who is running where,” commented Roman Lozynskyi, a national deputy from the Holos party. “Let’s start with those who are closest to the voter – local deputies and the local mayor. City and village councils, for example, approve the amount of local taxes, adopt programs and strategies, and the chairman [mayor], who heads the executive committee,  implements them. Such is the model of ‘parliament-government’ at the local level.”

“To choose local deputies and the mayor, voters will receive two ballots at the polling station,” explained Mr. Lozynskyi, who is deputy chairman of the Verkhovna Rada’s Committee on the Organization of State Power, Local Self-Government, Regional Development and Urban Planning. “Voters will receive two more ballots to elect deputies to the raion and oblast councils.”

“Don’t ask what the responsibilities of deputies of the raion council are. Due to the turbo mode of the parliament majority, we do not yet know. Under the decentralization reform, the powers of raion councils were to be transferred to united territorial communities. But the majority has not liquidated the raion council and is now considering what powers to transfer to these ‘Frankensteins’ [creatures],” Mr. Lozynskyi continued.

“It is easier with oblast councils. They approve regional budgets, programs of social and economic development of the region, monitor their implementation. These are not their only responsibilities, but the main ones,” he said.

The elections will complete decentralization at the level of oblasts and united communities in Ukraine – a process that began five years ago.

The same cannot be said about the raions. Ukrainians will have to elect almost 130 raion councils, even though decentralization is intended to eliminate this part of the administrative-territorial system in general. The Verkhovna Rada failed to make the necessary amendments to the Constitution to eliminate raions: the procedure is more complicated than adopting an ordinary law.

In the end, raions remained, albeit in a much smaller number, as the territory they cover was enlarged: previously, there were almost 500 raions, now – about 130. However, this does not solve the problem: after the October 25 elections, new raion councils will appear in the country, but, the fact is, they will not have any powers.

The 2020 local elections will also be the first in which the order of candidates nominated by parties is not final. That is, the voters – not the party – will ultimately choose the top candidates who will assume office. Voters will be able to help candidates move up on the party list by indicating on the ballot the serial number of party’s candidate they support; voters can only select the candidate from the party they vote for. After the votes are counted, the parties will receive a number of mandates in a council. Those mandates are then passed to candidates from the party’s list, which is now based on the number of votes the candidates receive. However, for each council, there will be a minimum number of votes a candidate needs to receive to move up in the list; if a candidate does not receive enough votes in his district, the party chooses its candidates according to the predetermined list.

On the one hand, open lists significantly increase intra-party competition; on the other hand, they create additional difficulties for voters and, consequently, room for manipulation.

“Our new electoral system was borrowed from European countries, so it seemed that everything should be fine,” observed Filip Alid, a candidate for the Kyiv City Council. “But there is one thing – for candidates not from the top of a party list, it is more difficult to win. Such a rule essentially kills the very principle of open lists because it’s almost impossible for the voter to change the candidates’ order on the list. “As a candidate not at the top of the list, I continue to fight for the community’s support of my party and myself,” said Mr. Alid, a first-time candidate for office.

“Another difficulty will be the counting of votes. After all, in Ukraine, the counting time was one of the longest in Europe. And, with a new type of ballot and the possibility to vote for different candidates – the process may be delayed for a day or more,” Mr. Alid noted.

Another innovation in the upcoming elections is that only political parties can nominate candidates for local councils almost everywhere. Previously, this was the case in communities with 90,000 or more voters, but now the threshold has been lowered to 10,000. Below this number, each citizen can be self-nominated for a seat on a council; above the threshold – only party members. In many communities, parties have not developed their local cells and are now scrambling for candidates.

The new election system is not easy to understand, and only a few weeks are left for voters to decide whom they will support.

In Ukraine’s capital, voters will receive only two ballots: with the list of candidates for the mayor’s post and to the City Council. In Poltava, Kropyvnytskyi, Kryvyi Rih, Kherson and Zhytomyr, there will be an additional ballot for candidates for district councils in the city. Thus, voters in these cities will receive five ballots each. Voters in the parts of Donetsk and Luhansk oblasts that are under Ukraine’s control will receive three ballots. They will vote for the mayor, deputies of the local council and deputies of the oblast council.

Work on local councils remains an unpaid volunteer position. Therefore, communities will again look for volunteer politicians who will manage the budget and the community’s non-renewable resources – land, forests, reservoirs – for the next five years.

November 15 is the approximate date of the second round of mayoral elections in cities with more than 75,000 voters. If no candidate receives more than 50 percent of the vote on October 25, the top two vote-getters advance to the second round.

A progressive innovation in the 2020 local elections is the gender quota, according to which two candidates of the top five on the party’s list at any level – community, raion or region – must be of a gender different from the other three. As a result, this election is seen as the first in 30 years of Ukraine’s restored independence in which women have about the same access to local politics as men.