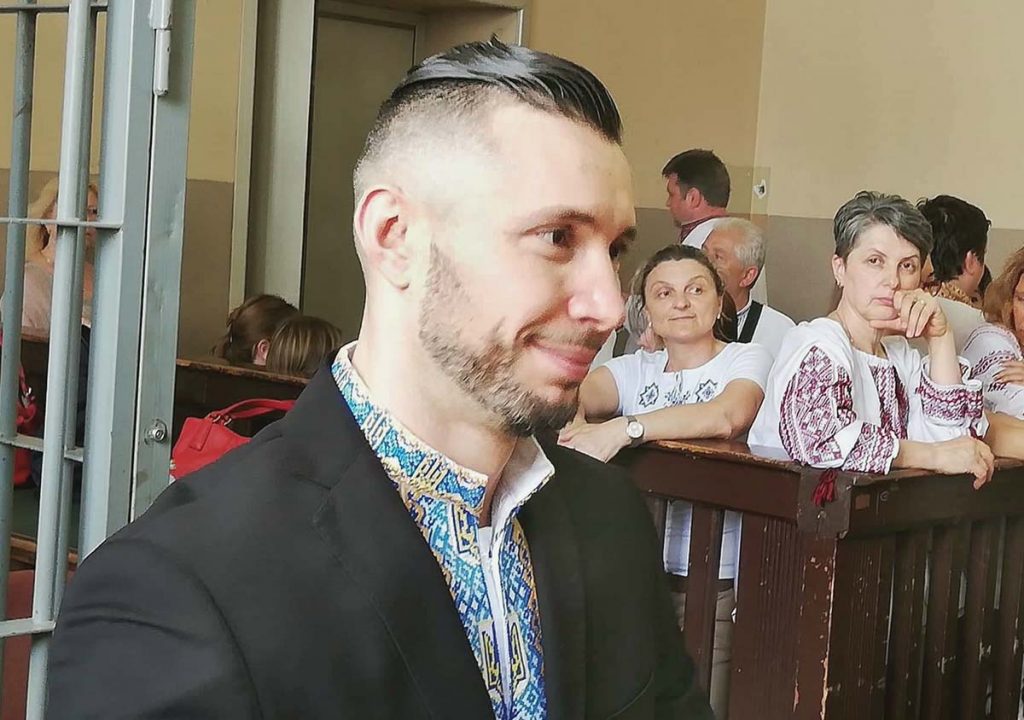 Natalia Kudryk/Radio Svoboda
Vitaliy Markiv inside the courtroom in Pavia, Italy, on June 21, 2019.

KYIV – When Ukrainian National Guardsman Vitaliy Markiv was given a 24-year prison sentence by a court in northern Italy on July 12, 2019, for his role in the deaths of an Italian photojournalist and his Russian interpreter, and wounding a French journalist, his mother said it was the “most painful moment of her life.”

Oksana Maksymchuk told RFE/RL in June that she was convinced he would be acquitted “because there wasn’t any proof” of his guilt and that the verdict came “as a shock to us… we had always remained optimistic.”

Mr. Markiv was 29 years old when the jury in the Lombardy regional city of Pavia decided to give him the maximum sentence for allegedly coordinating mortar fire that killed and wounded the three victims near the Donetsk Oblast town of Sloviansk on May 24, 2014, according to an English-language translation of the verdict translated by the Ukrainian Justice Ministry (https://drive.google.com/file/d/1RrZ2-ooH9fgwHbCGvjPnAz4jvnaWRvd3/view?usp=drive_web).

Mr. Markiv’s appeal of his conviction before the Milan Court of Appeal began on September 29, and a verdict is expected on November 3.

He has maintained his innocence for taking part in the deaths of Andrea Rocchelli and his Russian interpreter Andrey Mironov, and the injury of French journalist William Roguelon.

The lower court’s trial in Pavia lasted one year and consisted of 18 hearings that Mr. Markiv’s supporters say were covered by a biased local press that immediately destroyed the presumption of innocence principle and was based on a case that partly cited Russian propaganda as evidence.

During the appeal, the Markiv defense presented new evidence, including a 30-minute documentary film on the incidents surrounding the events that led to the journalists’ deaths in the Donbas war zone that was also screened at the Italian Senate.

It was co-produced by Ukrainian journalist Olha Tokariuk together with Italian colleagues and made through a crowdfunding campaign.

“We had our doubts about the integrity of the prosecutor’s investigation [and of Mr. Markiv’s guilt]… it was the first time [in Italy]that a soldier to our knowledge was convicted of killing journalists in a war zone,” she told The Ukrainian Weekly.

All the evidence that was presented in the lower court’s case was based purely on circumstantial evidence, said Wayne Jordash, a lawyer and managing partner at Global Rights Compliance. One of the world’s leading international criminal lawyers, he analyzed the Italian court’s verdict.

During the trial, he said, “the principle of presumption of innocence” wasn’t adhered to and the case didn’t prove Mr. Markiv was guilty “beyond a reasonable doubt.”

Mr. Jordash added: “Nobody saw Markiv shoot at the journalists, as alleged, or heard him direct the mortars that purportedly killed the journalists.”

The Ukrainian journalist, Ms. Tokariuk, noted that when Mr. Markiv was detained at the Bologna airport upon returning from Ukraine on June 30, 2017, the Italian media’s coverage of the defendant and description of Ukraine was “one-sided” and repeated Russian propaganda narratives.

The widely circulated Espresso magazine and newspaper Respublica, for example, “called Ukrainians fascists and described Ukrainians living in Italy as nothing but house cleaners and caretakers of the elderly,” said Oles Horodetsky, the head of the Christian Association of Ukrainians Living in Italy.

The Italian press would ascribe “physical traits” to Ukrainians by calling us “round-faced,” Mr. Horodetsky added.

Other Italian media outlets described the Euro-Maidan events as “illegal” and the war in the Donbas as a “peaceful uprising” instead of a conflict that Russia instigated and to this day is still involved in a command-and-control capacity.

The case also caught the attention of The New York Times, which noticed that the prosecutor’s evidence included partly “two videos from Russia Today plus a report on the website of Russkaya Vesna (Russian Spring) that the Ukrainian government said was false,” according to an article published on December 17, 2019.

Mr. Horodetsky also observed that the lawyer for the victims, Alessandra Ballerini, posted an article containing Russian propaganda messages about Ukraine on her personal website.

Based on Ms. Tokariuk’s documentary, the three journalists came to a combat area from Sloviansk and were killed or wounded in the village of Andriyivka. The city and village were controlled by Russian-led separatists, and the Ukrainian government wasn’t aware of their presence in the area.

When they came under fire, they were taking refuge in a ravine, didn’t have protective gear on and were not wearing identification that they were journalists, according to the documentary that included footage from the slain Russian, Mr. Mironov.

Mr. Markiv’s National Guard unit was 1.7 kilometers away on a hill called Karachun that overlooks Sloviansk, and prosecutors have yet to establish he was stationed there on May 24, 2014.

Prosecutors allege he shot at the group first with an AK-74 automatic rifle, before directing mortar fire in their vicinity, eventually killing Mr. Rocchelli and Mironov, as well as wounding Mr. Roguelon.

In the documentary, Mr. Mironov is heard responding to the taxi driver that drove them to the site, telling him that they were caught in “a crossfire from both sides” and that there was “someone sitting nearby shooting from everything he has” – not nearly 2 kilometers away.

A separate reconstruction of events conducted by Mr. Horodetsky in July 2019 at the scene cites testimony given by Mr. Roguelon stating that the fire coming in their direction was “from the left and right” of their position, not from the Karachun hill where the nearest Ukrainian forces were.

Ballistics experts told the Pavia court that an effective range for an AK-74 was 600-700 meters, less than half of the distance from where the hill is situated. Video footage also showed images of bullet holes on the taxi cab’s door, suggesting that the shots were not fired from an elevated position on a hill, Mr. Horodetsky added.

The Ternopil Oblast native told The Ukrainian Weekly his investigation points to either Russian-led separatists killing the two men or that they were in the midst of a crossfire that day.

The investigation stalled for two years in Mr. Rocchelli’s hometown of Pavia. But in the summer of 2016, the prosecutor in the case, Andrea Zanoncelli, found an article written by Ilaria Morani in Italy’s leading newspaper, Corriere della Sera.

She was not with the journalists and the interpreter when they were fired upon that day; instead, she was in Donetsk and allegedly heard a conversation her friend had with Mr. Markiv on the fateful day.

She based her article on that conversation and, during questioning, Ms. Morani stated it was based on a “compilation of remarks she he had heard,” according The New York Times. In the article, she stated that her colleague “spoke to a captain”– Mr. Markiv was a private at that time.

“Don’t come here, it’s a strategic area,” the captain was quoted as saying. “Usually we don’t shoot toward the city or at civilians, but as soon as we see anything move, we fire heavy artillery. That’s what happened with the two journalists and their interpreter.”

Italian authorities considered this an admission of guilt and subsequently arrested the National Guardsman when he flew to Italy to visit his mother.

“At best, the reported conversation was evidence of Markiv’s knowledge of the incident. The remainder of the evidence could not even establish knowledge,” British lawyer Mr. Jordash said. “At best, it established Markiv’s usual presence and function at the location. It suggested he could have been present at the scene. Nothing more.”

Ms. Morani didn’t respond to a text message and call on the Facebook Messenger platform.

Mr. Horodetsky said that Mr. Markiv’s defense had asked prosecutors three times to visit the site of the journalists’ death.

“They each time refused, stating too much time had elapsed although the railway passage, ravine and hill are all there… they even falsely stated that the area is in a war zone whereas it’s been under Ukraine’s control” for more than five years, he noted.

Mr. Markiv lived for nearly 10 years with his sister, mother and her Italian husband in Italy before returning to Ukraine to join protesters on the Euro-Maidan in December 2013. By then, he also had Italian citizenship. After Russia seized Ukraine’s Crimean peninsula the following year, he joined the National Guard, which is subordinate to Ukraine’s Internal Affairs Ministry.

When he was arrested three years later, the native of Ternopil Oblast was a senior sergeant and his phone conversations with his mother were already being tapped by the Italian authorities.

“At first I thought [his arrest]was a huge misunderstanding… I mean, he had a clean record in Italy and Ukraine,” his mother told RFE/RL.

Mr. Markiv is currently in a maximum security prison in Opera outside of Milan in northern Italy; he has been behind bars for three years and four months.

The Ukrainian government was also a co-defendant in the case.

Ukraine’s Deputy Minister of Internal Affairs Anton Herashchenko told The Ukrainian Weekly that the family of the slain Italian journalist was awarded reparations from Kyiv.

“However, the case [against Mr. Markiv]lacked substance and never proved his guilt,” Mr. Herashchenko said.

He believes Mr. Markiv was considered guilty even before the lower court’s trial started, because it took place in the victim’s hometown, “where he was well-known and even a square was named after him following his death,” Mr. Herashchenko said

Ukraine’s position has always been that Mr. Markiv “couldn’t ever see the journalists who were fired upon – they were hidden from the hill and our troops didn’t have drones at the time to conduct better reconnaissance,” he said.

Mr. Markiv’s lawyer, Raffaele Della Valle, didn’t respond to e-mailed questions for this article that were sent through an interpreter.