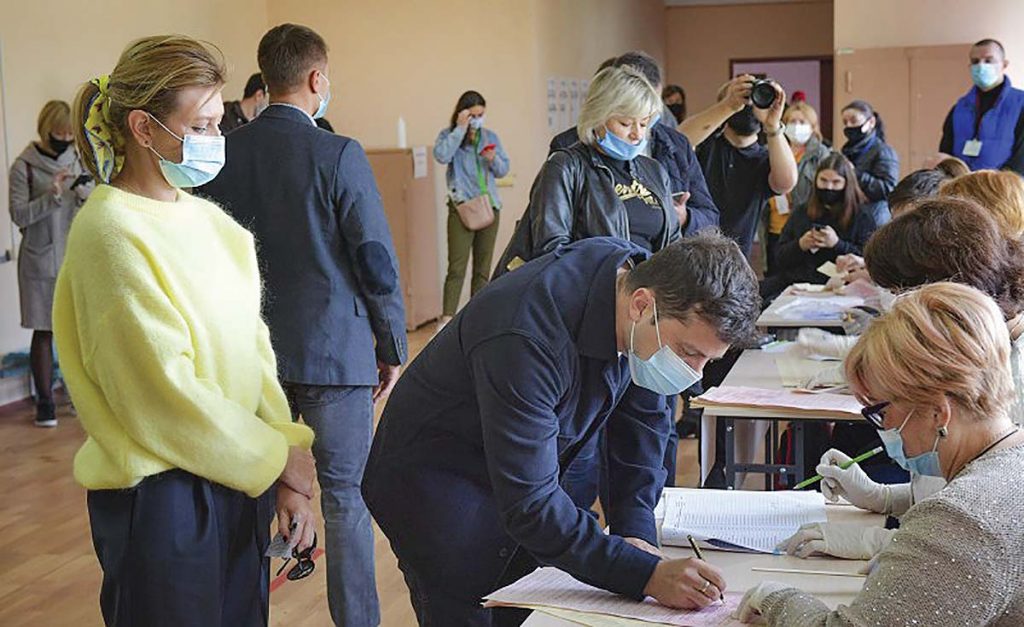 KYIV – On October 25, local elections were held nationwide in Ukraine, except in the temporarily occupied Autonomous Republic of Crimea and parts of Donetsk and Luhansk oblasts. The elections were held on a new administrative-territorial basis, as new united territorial communities have been created in connection with decentralization reform.

“The government has changed the outdated division into raions, which was adopted in the first half of the last century. It transferred more power to the communities, forming almost 1,500 united territorial communities,” Prime Minister Denys Shmyhal commented after voting in Lviv. “For the first time in the history of independent Ukraine, people on the ground will manage funds independently and decide where to spend resources. This is a key element of the decentralization reform,” he noted.

Mr. Shmyhal also pointed out that local authorities have never had as much power as they will have after this election. “From now on, communities will have their land and their full-fledged budgets. More than 2 million hectares of agricultural land have been transferred to local communities. And next year, the local communities’ budget will amount to over 500 billion hrv” (about $17.5 billion U.S.), he added.

The prime minister also reminded the public that safety is essential during these elections. Therefore, he called on Ukrainians to adhere to anti-epidemic measures at polling stations. “Take your own pen with you and leave the children at home. Follow social distancing, wear a mask, and use antiseptic before and after visiting the station. Show your passport to the members of the commissions; avoid handing it over to others,” advised Mr. Shmyhal.

The Ukrainian Weekly’s reporter experienced the quarantine restrictions at his polling station. To enter, voters had to wear a protective mask; the entire staff of the station also complied with the rules. However, it was difficult to follow the distancing requirement in the small area assigned to the station.

According to the Central Election Commission, voter turnout in the local elections in Ukraine was 36.88 percent. A total of 10,556,621 voters received ballots and voted. The highest turnout was in the Ternopil region – 44.68 percent, the lowest in the Donetsk region – 31.67 percent. In the previous local elections, held in October 2015, 46.62 percent of Ukrainian voters cast their ballots. Voter turnout in the parliamentary elections of July 2019 was 49.84 percent. In the last presidential election in the spring of 2019, the turnout was 63.52 percent in the first round and 61.37 percent in the second round.

One in five voters who did not vote could not do so due to health problems, and one in seven said they did not know whom to vote for. Every eighth voter deemed the election uninteresting, according to the results of the electoral-behavioral survey of the sociological group Rating conducted on election day.

The electoral process in the local elections was calm and well-organized, said Ingibjörg Sólrún Gísladóttir, director of the Office for Democratic Institutions and Human Rights (ODIHR) of the Organization for Security and Cooperation in Europe (OSCE). However, making amendments to electoral legislation less than six months before the local elections was contrary to international practice. Ms. Gísladóttir noted that one of the positive changes in Ukraine’s new electoral legislation, which was enacted two months before the vote, was simplifying the procedure for registering voters and changing an electoral address, as previously recommended by ODIHR. Around 100,000 voters this time were able to take advantage of this opportunity. Ms. Gísladóttir also cited as positive the new Electoral Code’s gender quota for lists of candidates.

Central Election Commission Deputy Chairman Serhiy Dubovyk said that local elections results should be set by November 6. According to the Electoral Code, in cities with more than 75,000 voters, where none of the candidates received more than 50 percent of votes, the second round of mayoral elections must be scheduled for a Sunday within three weeks from the date of the first round.

“Territorial election commissions have 12 days to establish the election results,” said the CEC’s deputy chairman. “But someone can install them faster. Moreover, no one said that these results would not be challenged. In that case, the election will be postponed until the court decides. The trial lasts another week. That is, the second round may take place in early December,” explained Mr. Dubovyk.

Because the official results have yet to be released, all vote counts cited are approximate, as they are based on exit polls and the parallel count of elections observers.

Large cities’ local leaders and mayors have retained the public’s trust. In Kyiv, Kharkiv, Vinnytsia, Ivano-Frankivsk, Mariupol and Zhytomyr, the current mayors are seen as winning in the first round. In Dnipro, Mykolayiv, Odesa, Lviv, Kryvyi Rih, Uzhhorod and Zaporizhia, incumbents are in the lead or will compete in the second round.

Voters in Kyiv appear to have re-elected Vitaly Klitschko for another term, giving him 50.6 percent of votes. As of October 28, 99.5 percent of the votes were counted; there is still a slight chance of a change in final results. A total of 364,683 voters supported Mr. Klitschko. In second place is the former head of the Kyiv City State Administration (2010-2013), Oleksandr Popov, with 9.5 percent of the votes. Mr. Popov was a member of the Party of the Regions and now represents the Opposition Bloc. Serhiy Prytula from the Holos party received 7.8 percent of votes. Mr. Klitschko’s party, UDAR, European Solidarity, Servant of the People and Holos received the most votes for seats on the Kyiv City Council.

In Lviv, the incumbent, Andriy Sadovyy, and the nominee of the European Solidarity party, Oleh Syniutka, are headed to the second round of the mayoral election. According to a poll conducted by the sociological agency Fama, Mr. Sadovyy received about 38 percent of the vote, his competitor – 28 percent. The parties European Solidarity, Samopo­mich, and Holos were the most successful in the Lviv City Council elections.

According to exit polls in Kharkiv, Mayor Hennadiy Kernes succeeded in winning re-election in the first round. Mr. Kernes received 57.90 percent of the votes, while his closest rival, Oleksandr Feldman of the Opposition Platform – For Life, won 12.12 percent. On September 15, it became known that Mr. Kernes fell ill with COVID-19 and was in a severe stable condition. He was taken to Germany for treatment on the night of September 17 in a protective capsule and has not appeared in public since.

In Dnipro and Odesa, Mayors Borys Filatov and Hennadiy Trukhanov each received approximately 30 to 40 percent of the vote, which takes them to the second round of the mayoral elections.

OSCE observers noted that the poll initiated by President Volodymyr Zelenskyy, which took place near polling stations on election day and was funded by his political party, created somewhat of a political advantage and also blurred the boundaries between the state and the political party.

The OPORA civic network stated that President Zelenskyy abused his administrative resources and secretly campaigned for the Servant of the People party with “five questions from the president” and tried to replace representative polls with it. According to OPORA observers, the presidential poll interviewers were in about 55 percent of the polling stations.

The Servant of the People faction plans to use the results of the poll in its lawmaking. The reduction in the number of Verkhovna Rada national deputies may be considered during the current session, the party’s chairman, Oleksandr Kornienko, said.

The Ministry of Foreign Affairs of Ukraine charged that Hungary had directly interfered in the Ukrainian election process and that Budapest did not respect Ukrainian legislation. On the day of the local elections in Ukraine, Hungarian Foreign Affairs Minister Peter Szijjarto called on Ukrainian Hungarians to vote for one of the parties running in the local elections in Zakarpattia, the Hungarian Cultural Society of Zakarpattia, and called for support for the re-election of Berehove’s mayor, a representative of the Hungarian community, Zoltan Babyak. Mr. Szijjarto also said that Zakarpattia residents who were on the territory of Hungary could go to Ukraine to vote and return without undergoing a 14-day quarantine – an exception to the rules established due to the coronavirus pandemic.

The Ukrainian Foreign Affairs Ministry said it was not only “upset” by the statement but also believed it undermined Ukrainian-Hungarian relations. It called such statements unacceptable and warned of a harsh reaction.

Two days after the nationwide elections, on October 27, the Constitutional Court declared some of Ukraine’s anti-corruption legislation unconstitutional. As a result, the National Agency for the Prevention of Corruption executed the court’s decision and closed the register of electronic declarations, which is required for the verification of assets reported by candidates for management positions. Without this background check, heads of state bodies cannot be officially appointed. Thus, the Constitut­ional Court in effect blocked the implementation of the results of local elections. The appointment of candidates elected as chairpersons or deputies of regional and raion councils is possible only after their asset declarations are reviewed and verified.