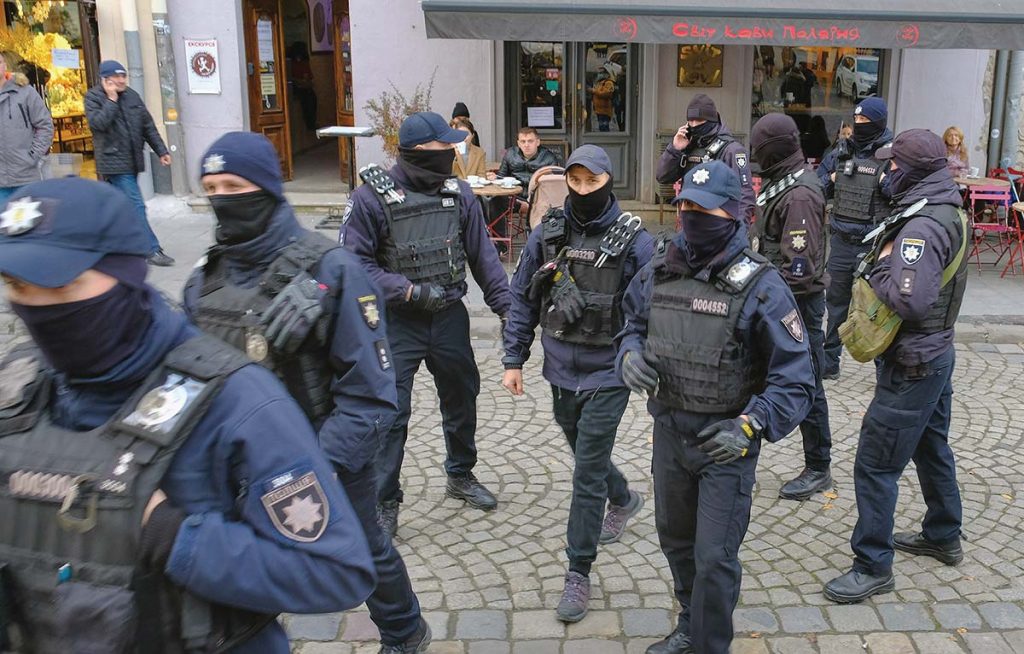 Petro Zadorozhnyy
Police officers on patrol in Lviv’s city center to prevent people from entering restaurants during the weekend quarantine.

LVIV – On Saturday, November 14, Ukraine entered the first weekend of its new quarantine regime, whereby there are additional restrictions on weekends. On Saturdays and Sundays, bars, restaurants, cafes and other catering establishments are closed. Shopping centers and entertainment establishments are closed. Establish­ments of trade and consumer services are closed, with few exceptions. Gyms and swimming pools are closed. The government’s “weekend quarantine” is slated to last until November 30. In addition, previous anti-epidemic restrictions that affected regions with the worst coronavirus outbreaks will now apply to all regions.

However, many Ukrainians are not happy with the government’s decision, and the weekend quarantine has provoked strong opposition from small businesses which say the government is depriving them of the means to survive. The Cabinet of Ministers, meanwhile, has offered assurances that it is preparing compensation for businesses affected by the restrictions.

The most powerful resistance against the new restrictions came from local councils in several Ukrainian cities. The mayors of Lviv, Ivano-Frankivsk, Mukachevo, Zhytomyr, Cherkasy, Mykolayiv, Ternopil and Odesa stated that the weekend quarantine would not be enforced in their cities.

In Lviv, Mayor Andriy Sadovyi reported that the city’s executive committee had declared all Saturdays and Sundays through the end of November as working days. “This means that it’s impossible to introduce a weekend quarantine in Lviv because we do not have weekends. People have the right to work,” he said.

“Every Lviv establishment that will be fined this weekend will show police officers a photo of the president [Volodymyr Zelenskyy] drinking coffee in a cafe from the red zone in Khmelnytskyy in June. Do you know how much he paid for it? Nothing at all!” Mr. Sadovyi wrote on Facebook. “We are creating working groups in the City Council on Saturday and Sunday and will help those entrepreneurs who decide to work after all,” Mr. Sadovyi added, noting that some 50 lawyers of the City Council will “take the side of entrepreneurs.”

On Saturday, November 14, law enforcement officers recorded nearly 1,000 violations by public institutions during the first day of the government’s nationwide weekend quarantine. According to the Ministry of Internal Affairs press service, the police drew up 990 administrative reports and opened nine criminal proceedings. The largest number of violations was recorded in the Lviv region – 390. There were 209 in the Dnipropetrovsk region, 128 in the Cherkasy region, 121 in the city of Kyiv city, 84 in the Kyiv region and 74 in the Ternopil region. The Lviv City Council said it will file an appeal in court of all the fines imposed on the city’s entrepreneurs.

Prime Minister Denys Shmyhal stressed that City Councils do not have the authority to lift the quarantine for some facilities. “City leaders do not have the authority to either allow or ban the effect of the government’s decisions. The government’s decisions are unconditional and apply to all business entities located on Ukraine’s territory. The weekend quarantine applies to a defined list of business entities that operate on the territory of Ukraine,” the prime minister pointed out.

A week earlier, the government had explained the new measures as a compromise because the economy could not withstand a full lockdown. “I understand that the new restrictions are unpleasant and painful for many members of the business, entertainment and cultural community. The government is ready to lend a hand to support our entrepreneurs during the intensified quarantine regime on the weekends,” said Mr. Shmyhal during a meeting of the Cabinet of Ministers on November 11.

The prime minister chaired an online meeting with city leaders on Monday, November 16. Mr. Shmyhal underscored that the government is now looking for ways to flatten the curve of COVID-19. “For us, this is one of the ways out, when people are at home on weekends and do not create a large flow and crowds. The high earnings of the industries on Saturday and Sunday are just proof of the fact that huge flows of people spend time on the food and entertainment industry,” he said. Mr. Shmyhal explained that the weekend quarantine makes it possible to redistribute demand from the weekend to five working days, thus reducing the flow of people and contacts among various social groups.

Mr. Shmyhal also stressed that the government is now focused on communication with industries in order to develop mechanisms to compensate for their losses. “Today we have several tools that have proven themselves in the spring. …We have several programs we are going to introduce this week to support the industries that suffer the most,” he said.

At the same time, according to the prime minister, the government is working to increase the availability of hospital beds and oxygen supplies, and to give doctors more tools with which to treat patients. Mr. Shmyhal advised that the effect of any anti-epidemic measures could be seen in two to three weeks.

On November 17, the Verkhovna Rada considered a proposal to abolish the weekend quarantine. Most parliamentary factions had harshly criticized the Cabinet’s decision, yet, there were not enough votes in the Parliament to cancel the quarantine. The leader of the Servant of the People faction, David Arakhamia, suggested giving the government two weeks to see if the quarantine would achieve the desired result and only then make a decision. However, the Rada took a different approach: it instructed the Cabinet of Ministers to publish all new quarantine restrictions at least seven days before their entry into force.

Speaking in the Verkhovna Rada on that day, Prime Minister Shmyhal said that if the weekend quarantine does not flatten the curve, quarantine restrictions will have to be tightened. “The main task of the weekend quarantine is to make sure that we reach a plateau in terms of the number of patients,” he explained. “That is, to record it in figures no more than 11,000 to 12,000 cases a day. In the next two weeks, we must see its first results. If that doesn’t happen, we’ll start preparing for tougher quarantine restrictions.”

The prime minister also reported that improving the medical system’s capacity is a daily task. “At the beginning of the pandemic in Ukraine, only 12,500 beds were ready to receive patients. Currently, their number is 54,000. And every week the government adds 2,000 to 4,000 new beds. At present, we cannot see the need to deploy mobile hospitals, but such preparations are under way,” Mr. Shmyhal said.

In the meantime, President Zelenskyy and the head of the Presidential Office, Andrii Yermak, are undergoing treatment for COVID-19. According to the president’s press service, Mr. Zelenskyy is in good shape and his symptoms are mild. He is hospitalized in Feofaniya, a hospital designated for Ukrainian officials. Because Minister of Health Maxym Stepanov had stated that hospitalization is needed only for patients in high-risk-groups with intense symptoms, Mr. Zelenskyy’s hospitalization provoked a public outcry, and activists announced a protest in front of the hospital for November 21.