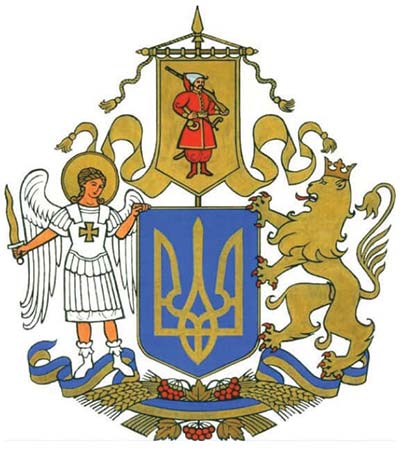 Ministry of Culture of Ukraine
The sketch by artist Oleksiy Kokhan that was chosen for Ukraine’s great state emblem.

KYIV – It percolated from grumbling on social media to controversy after a jury panel of Ukraine’s Ministry of Culture on November 19 selected the nation’s great state emblem – the constitutionally stipulated coat of arms that never was designated after the country’s fundamental law was ratified 24 years ago.

“Trash,” one Facebook user commented. Another noted Archangel Michael is “wearing white socks.” Another commenter said, “it takes me back to childhood and makes me want to start coloring it.” Others criticized the colors of the Ukrainian flag being stepped on, while some noted the Kozak banner standing above a Christian figure. Still others on Twitter noticed that the Kozak looks “theatrical” or “cartoonish” and that the depiction of wheat and the Eurasian guelder rose (kalyna) look similar to the images used in Soviet propaganda.

The winning sketch depicts a Kozak with a musket inside a banner that appears atop Ukraine’s small state emblem – the trident (tryzub). The tryzub is flanked on the right by a lion representing western Ukraine and on the left by Kyiv’s guardian, Archangel Michael, brandishing a sword. Presumably, the composition is meant to unite the western and eastern parts of the country. At the bottom is a floating ribbon of Ukraine’s blue and yellow national colors intertwined with wheat and kalyna.

As news spread of the selected sketch, a process that involved a 10-member panel of historians, and heraldry, legal and art experts over a one-month period, criticism grew across a broad spectrum of politics and culture.

On the day of the announcement, Culture Minister Oleksandr Tkachenko, who for years managed oligarch Ihor Kolomoisky’s 1+1 Media empire, took to Facebook to say that graphic artist Oleksiy Kokhan’s work was chosen from among 111 other submissions, winning the equivalent of nearly $3,600 for taking first prize.

Mr. Tkachenko said the 73-year-old artist met all the constitutionally stipulated criteria – namely the inclusion of elements of the “emblem of the Zaporizhzhia [Kozak] army, a Kozak soldier, a knight with a musket and the coat-of-arms of the princely state of Volodymyr the Great [the trident, which constitutes Ukraine’s small emblem].”

It was the fourth time Ukraine has moved forward to designate a great state emblem, with the previous three attempts failing to gather at least 300 votes in the Verkhovna Rada, the number necessary for a constitutional two-thirds majority. Mr. Tkachenko added that the Justice Ministry will next draft legislation “on state symbols” for the legislature to vote ahead of Ukraine’s 30th independence day anniversary next year.

The sketch is in “absolutely bad taste,” Hanna Hopko, a former lawmaker and chairwoman of the Zero Corruption Conference non-profit group, told The Ukrainian Weekly.

She accused the administration of President Volodymyr Zelenskyy of “dwindling and discrediting symbols” as part of the “government’s actions to shake the foundations of the state.”

Ms. Hopko added that the trident suffices as the nation’s symbol as “a wonderful and expressive coat of arms, which unites our millennial history and Ukrainians of all regions for generations.”

If the current sketch passes as the great state emblem, she said, it will be an “outrage” given that Parliament this year couldn’t “muster enough votes to condemn Joseph Stalin and Adolf Hitler in a resolution during the 75th anniversary of the end of World War II.”

Heraldry expert Oleksa Rudenko told the Ukrainian service of the BBC that the inclusion of a great state emblem was the outcome of a compromise between nationalists and Communists when the Consti­tution of Ukraine was being ratified in 1996.

The back-and-forth negotiations that took place also included wrangling over the state language and the agreement that the small emblem would be the trident while reserving the great state emblem for a later date – something that the “Communists thought would still be the [Soviet] hammer and sickle,” Ms. Rudenko said.

The last time an attempt was made to enshrine a great state emblem in the Constitution was in 2009. It failed.

Even the chairman of this year’s selection panel, Andriy Hrechylo, had said years ago that a great emblem “isn’t necessary.” He and Mr. Kokhan were co-authors of the small trident emblem.

“There really is no sense in approving a large coat of arms. The time when it could be done painlessly is over. The existing symbols are accepted by the country and have justified themselves,” Mr. Hrechylo had said.

Historically, the trident was first approved in 1918 as World War I was coming to an end during a brief period of independence. It carried the idea of unifying Ukrainian lands and association with the heritage of the Kyivan-Rus’ era, he added.

Sergej Sumlenny, head of the Ukrainian office of the German-funded Heinrich-Boell Foundation, noted that the sketch artist had worked for the Perets (Pepper) magazine in 1984-1999. One drawing of Mr. Kokhan’s that he shared depicted a Ukrainian nationalist dressed in Kozak garb grovelling for money from a devil. The devil is wearing a bowtie with the colors of the U.S. flag and the Kozak has a suitcase beside him with stickers of the Central Intelligence Agency and the congressionally funded Radio Liberty news agency.

The Ukrainian Weekly was unable to reach Mr. Kokhan through the National Union of Artists of Ukraine.

Serhiy Proskurnya, a film and drama director who also has organized Ukrainian Independence Day parades for Presidents Petro Poroshenko and Viktor Yushchenko, told The Ukrainian Weekly that the chosen sketch “has no direct relation to the artist’s background.”

However, judged visually, he questioned why the lion is placed on the right side, since it represents Ukraine’s western region and thus should be on the left.

Additionally, he noted that “the approach to the heraldry in the image and state elements contained therein are mirror images of the chaos and absence of a goal-oriented culture of statehood” for Ukraine.

Mr. Proskurnya characterized the sketch as “romantic” – one that looks to the past “poetically” and doesn’t show “continuity between the state and its people harmoniously.”

It more resembles a situation when after years of “a single sense of statehood, …amid a tragic history when people were subjugated, …of the instinct of fear being forced upon us through the Holodomor [the Great Famine of 1932-1933]and the post-World War II famine of 1946-1947, while being the Soviet republic most punished for pursuing statehood through severe repressions… We can’t find an agreement,” Mr. Proskurnya said. He was referring to Ukraine’s turbulent history that makes reaching a consensus on a state emblem more complicated.

It’s like having “two Ukrainians with three hetmans [Kozak leaders],” he added.

He found it puzzling why a Kozak stands above an angel and why the lion is “standing on its hind legs as if it’s begging for a piece of sausage.” The emblem, he said, should properly represent the lands in and around Lviv controlled by King Danylo Halytskyi, who “symbolizes someone who has the ability to defend himself, who demonstrates strength and an optimistic view of the future.”

Ms. Hopko, the former lawmaker, said if Parliament approves the emblem, “and I don’t believe it will, …then it will be humiliating for the state.”

And if it doesn’t, then “Ukrainians will have failed to approve their own great coat of arms… and Russian propaganda will have more fodder on Ukraine,” she said.