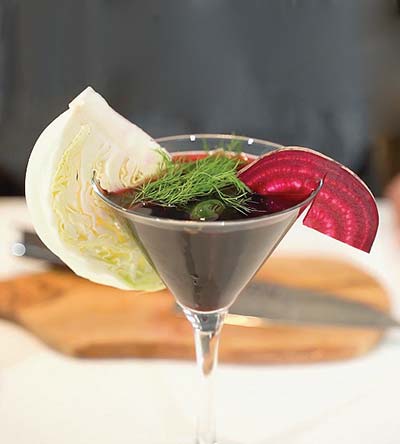 Staff | The Ukrainian Weekly | Subscription
The “Borscht Martini” with which the Ukrainian Institute of America toasted its 72nd anniversary.

NEW YORK – A wedge of cabbage… hanging over a cocktail glass? Yes – but only for a “Borscht Martini”! Conjuring such a rara avis (recipe at close of this article) was one of many prequel videos on the website of the Ukrainian Institute of America (UIA) prior to kickoff for its October 25 “2020 Gala Honoring all Ukrainian Medical Personnel.” The goal was to raise $72,000 (this year is the 72nd year of the UIA).

UIA board members spun lively commentaries in real time. The center-piece was an informative “Fireside Chat” about COVID-19, flanked by many pre-filmed messages from artists and notables, plus assorted musical performances from near and far. For online viewers, UIA’s website offered videos of past events at UIA.

The diverse virtues of these virtual diversions offered a cornucopia that would have proved impossible to produce live.

The gala begins to stream

UIA President Kathy Nalywajko greeted viewers, outlining the need to continue the music, arts, and education programs of UIA in virtual format during a pandemic. Ms. Nalywajko explained the significance of the gala’s dedication, and wished for all to be “entertained, educated, and inspired.” Indeed by the gala’s end, contributions via text and Internet links had climbed to $66,000.

The president of the Ukrainian Medical Association of North America, Dr. Peter Lenchur, added his greetings, thanking all medical workers in this crucial time.

Dr. Solomiya Ivakhiv, director of Music At The Institute (MATI), recounted how, over 32 seasons, MATI has presented 200 Ukrainian musicians to audiences. Future concerts will be a hybrid transmission, via computer. Dr. Ivakhiv affirmed the goal to spread Ukrainian music to multi-national audiences and performers.

Virtual messages from around the world

Viewers saw a variety of video greetings. Ukraine’s Permanent Representative to the United Nations Sergiy Kyslytsya and Consul General of Ukraine in New York Oleksii Holubov voiced their commendations and best wishes for the UIA. Dr. Lubomyr Luciuk from Canada sent his congratulations.

Viewers saw a very special noteworthy greeting by Alexander Davis, great-grandson of Volodymyr (William) Dzus, who founded the UIA in 1948.

Alexa Chopivsky, director of Program on the World Economy at The Aspen Institute and founder of Transnational Education Group, congratulated Ms. Nalywajko on continuing the UIA’s mission of outreach.

From Ukraine, Ihor Matselyukh played the pan flute with his wife at the organ, in a unique arrangement of Skoryk’s ubiquitous “Melody.”

At the heart of the gala was a “Fireside Chat” with Dr. Boris Lushniak, former acting surgeon general of the United States and current dean of the University of Maryland School of Public Health. UIA Board Member Adrianna Melnyk-Hankewycz felicitously led the questioning. Dr. Lushniak enumerated the incredible achievements and speedy progress against COVID-19, but also pointed to the work still ahead, addressing topics of virus mutations, antibodies, a vaccine and herd immunity.

Regarding containment strategies, he reaffirmed public health recommendations: masks, hand washing and avoiding crowds. But we should not lose sight of social and emotional contact, he added. Dr Lushniak said the term “social distancing” had an unhappy connotation; better would have been merely “physical distancing.” We must always care for others, he underscored.

In a final tableau, Ms. Ivakhiv and Ms. Melnyk-Hankewycz joined Ms. Nalywajko in raising “Borscht Martinis,” to toast the viewers. (Recipe: 50 gm vodka, 50 gm apple brandy, 30 gm beet juice/syrup and juice of one lemon. Garnish with dill, beet slice and, of course, a wedge of cabbage.)