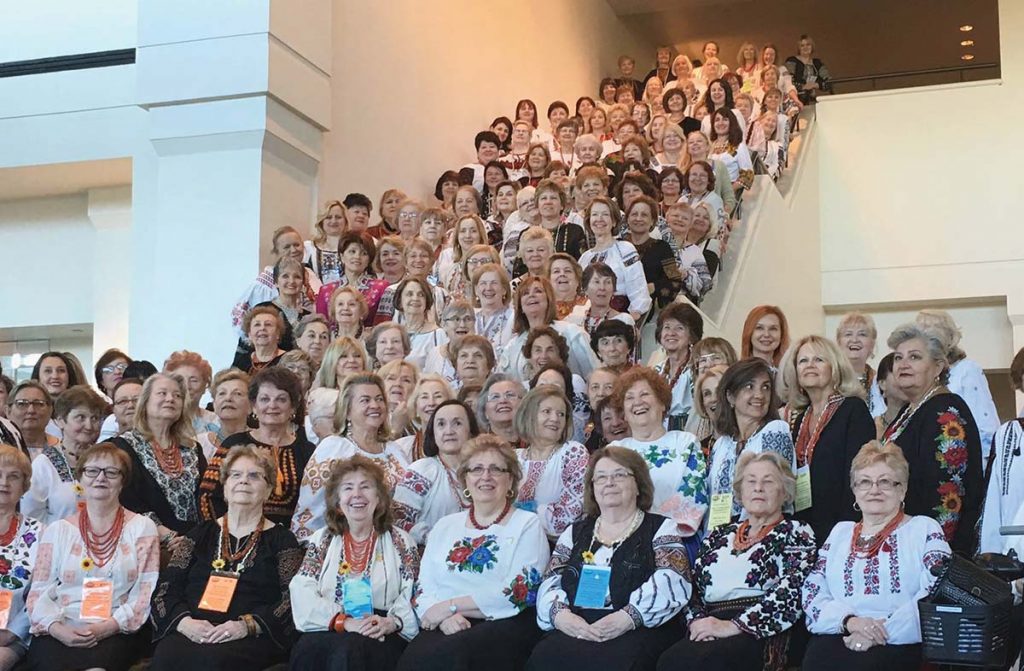 Chrystyna Czajkowsky
Members of the Ukrainian National Women’s League of America at the organization’s XXXI Convention in Tampa, Fla., in 2017.

On December 6, the Ukrainian National Women’s League of America (UNWLA) will be celebrating its 95th anniversary. We invite the Ukrainian community to join us for this virtual event beginning at 3 p.m. Eastern Time. A wonderful program highlighting our various achievements is planned.

Formed in 1925, the UNWLA’s goals include informing the Free World about events in Ukraine, and promoting and preserving Ukrainian national identity, cultural heritage and ethnic traditions. The UNWLA is guided by the principles of political non-partisanship, religious tolerance and universal respect for human rights. These moral pillars helped the UNWLA become one of the largest and oldest Ukrainian organizations in the United States.

Today we proudly continue the traditions and activities established by the women who came before us, and we welcome new members and supporters who share our mission and values.

Since its inception, the UNWLA has worked to support Ukraine and its people. During the Holodomor of 1932-1932, the UNWLA worked with its counterparts in western Ukraine to break the informational blockade created by the USSR in order to inform the world of the genocide and to provide aid to its victims.

The UNWLA continued to inform the world of cultural and political repressions occurring in Soviet Ukraine by organizing demonstrations and protests, and sending petitions to local and federal officials as well as to international bodies like the League of Nations and the United Nations.

Supporting Ukrainian culture, members of the UNWLA organized a Ukrainian pavilion at the Chicago World’s Fair, created The Ukrainian Museum in New York City and established numerous Ukrainian preschools in the United States.

In 1944, the UNWLA began publishing its monthly periodical Our Life, a magazine describing the organization’s activities as well as the many accomplishments of notable Ukrainian women. At the time of its founding, Our Life/Nashe Zhyttia was the only bilingual English-Ukrainian magazine in the U.S.

In the sphere of education, the UNWLA supports underprivileged children in Ukraine, Brazil and Poland through its scholarship fund.

The organization financed the creation of a women’s studies center at the Ukrainian Catholic University in Lviv.

The UNWLA continues to disseminate information and awareness about Ukraine and Ukrainians and seeks to correct any misrepresentation of the country, its people, and events.

Continuing its 95-year commitment, the UNWLA’s humanitarian programs help those in need. They include support for orphans, underprivileged children, the elderly (“Fund Babusi”), burn victims, veterans, and victims of war in eastern Ukraine.

This year, the UNWLA donated over $25,000 to the flood victims in western Ukraine and over $31,000 was raised as a part of the “Feeding the Hungry, UNWLA for the U.S.A.” program to help those Americans who have lost jobs and the ability to provide for their families due to the COVID-19 pandemic.

Recently, the UNWLA established a new program, “Spiritual Rebirth of Ukraine,” in support of two theological seminaries that prepare priests for work with both the soldiers and residents in eastern Ukraine.

Father Pavlo Protsenko, a graduate of Volyn Orthodox Theological Academy, chaplain of the Aidar battalion and the 53rd mechanized brigade, and priest of the only Ukrainian church in the Luhansk region writes: “With the help of the UNWLA, I can continue on this path of defending Ukraine not only at the frontlines in the war zone, but also in the domain of informational warfare, which is less tangible, but equally as threatening.”

Father Volodymyr Vakin, rector of Volyn Orthodox Theological Academy, writes: “… It is important to remember that the aid of the UNWLA to the chaplains and priests in the east provides a powerful boost of morale, a feeling that we are all working for a common goal.”

For more information on the history of the UNWLA, and its past and present projects, readers are invited to visit the organization’s website: (www.unwla.org) and follow its Facebook page (www.facebook.com/unwla). The multitude of projects UNWLA members have run since 1925 were made possible by contributions from our community.

Our 95th anniversary celebration on December 6 will feature a presentation of all the current projects in which readers can get involved. Together we can do amazing things, as illustrated by the hard work of our amazing members in organizing charitable as well as artistic events, fairs and concerts. Conducting such events helps not only to promote Ukrainian culture but also establishes a positive reputation for Ukrainians in the U.S.

We invite you, your family and friends to join the online celebration of the UNWLA’s 95th anniversary, support our programs and join our efforts. For registration information for this event, please visit our website or Facebook page.

Oksana Sorochan and Orysia Soroka are members of UNWLA Branch 137.