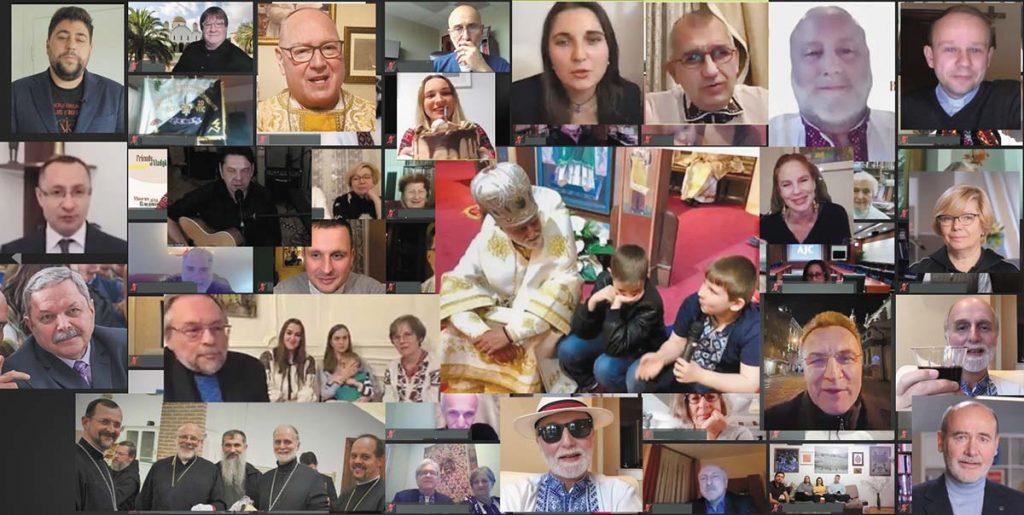 Staff | The Ukrainian Weekly | Subscription
Organizers of the birthday celebration displayed a collage of pictures which included Archbishop Borys Gudziak as well as his friends and colleagues.

CHICAGO – Hundreds of long-time friends and colleagues from Ukraine, Western Europe and North America joined together on November 24 for a free and festive virtual gathering to honor Metropolitan-Archbishop Borys Gudziak on his 60th birthday.  The birthday celebration was initiated and coordinated by staff of the Ukrainian Catholic University (UCU), where then-Father Gudziak served as rector from 2002 until his reassignment as bishop to the Eparchy of St. Volodymyr in Paris in 2012.

The multi-media program was interspersed with often humorous slide shows and heart-warming reminiscences offered by friends who met the archbishop at various stages of his life, from his childhood in Syracuse, N.Y., to his teenage years in the Plast Ukrainian Scouting Organization, and his later years as a doctoral student at Harvard University and to his time as a seminarian in Rome. Other speakers reflected on his pioneering work in the 1990s and 2000s as a co-founder of the Lviv Theological Academy and UCU and his six years of ministry in Paris where he helped to revitalize the Ukrainian Catholic Eparchy, serving parishes in France, Belgium, Switzerland, Luxemburg and the Netherlands. At the conclusion of the program, Bishop Andrii Rabiy shared his perspective of Bishop Gudziak’s new mission as the metropolitan of Philadelphia.

Although admission to the live Zoom event was free of charge, many supporters chose to make generous charitable contributions in honor of the celebrant.  In keeping with the archbishop’s wishes, donations were designated for the Bohdan Solchanyk Endowed Scholarship Fund, created in memory of the 29-year-old UCU historian and graduate student who died on February 20, 2014, during the Revolution of Dignity in Kyiv.

The masters of cerenomies for the program were Olha Zarichynska, an early graduate of UCU who currently serves as the university’s director of development, and John Kurey, the former president of the Ukrainian Catholic Education Foundation, who joined the event from the archbishop’s residence in Philadelphia.

Following introductory remarks and a brief slide show, Ms. Zarichynska and Mr. Kurey invited the archbishop’s brother, Dr. Marko Gudziak, who is a physician based in Michigan, to share his childhood memories.  Mr. Gudziak shared stories from their rambunctious youth, including the time when the future archbishop broke his arm while defending his younger brother from a gang of bullies.  He also conveyed an emotional greeting from his elderly aunt, the archbishop’s godmother, Stefania Szypula, who, along with their parents, has been a source of great strength and inspiration for the archbishop.

Dr. Boris Lushniak, the former acting Surgeon General of the United States and the current dean of the School of Public Health at the University of Maryland, shared a series of humorous anecdotes from the summers he spent with his friend learning outdoor leadership skills at Plast summer camps.  He and the archbishop have continued their involvement in Plast as members of the “Orden Khrestonostsiv” fraternity.

Long-time friend Ilya (Iko) Labunka recalled his years as the future archbishop’s roommate during his years at Harvard, and Fr. Michael Loza, pastor of St. Joseph’s Ukrainian Catholic Church in Oakville, Ontario, shared his experiences as a young seminarian in Rome in the 1980s when he and the archbiship drew inspiration from Patriarch Josyf Slipyj – a Cardinal who suffered 18 years of imprisonment and torture in the Soviet Gulag before his release in 1963 when he was allowed to attend the historic conclave Vatican II.

Renowned historian Prof. Yaroslav Hrytsak offered his perspective on the early 1990s after Ukraine had regained its independence and a young doctoral student from Harvard (Archbishop Gudziak) established the Institute of Church History to document the life stories of hundreds of Ukrainian Catholics who had endured persecution but kept their church alive in the Soviet underground.  He also recalled the infant stages of the formation of the Lviv Theological Seminary in 1994, and, eventually, the Ukrainian Catholic University in 2002 – a seemingly impossible task, to start a university from scratch despite tremendous resistance from the Ukrainian government and skeptics within the Church.  But, Mr. Hrytsak said, the archbishop was blessed with a rare combination of virtues.  He is a bold dreamer and a fierce pragmatist and those characteristics enabled him to fulfill so many of his dreams, Mr. Hrytsak said.

Cardinal Timothy Dolan of New York and Bishop Hlib Lonchyna also extended their greetings and offered their prayers for Archbishop Gudziak’s good health and continuing success.  Lviv Mayor Andriy Sadovy also joined the festivities while strolling through the city center at night against the backdrop of two of its most iconic medieval churches.  He thanked the archbishop and his colleagues for the many ways in which he and UCU have helped to revitalize the city.

At the conclusion of the program, Archbishop Gudziak expressed his heartfelt thanks to the hundreds of supporters from around the world who joined the teleconference. (By some estimates, nearly 1,000 people logged in on more than 300 computer screens.)

“Every breath we take, every beat of our heart is a gift from God,” Archbishop Gudziak said.  “So we should really live our lives in a perpetual state of profound gratitude.”

After the archbishop concluded his remarks, Mr. Kurey and Ms. Zarichynska simultaneously brought out identical-looking birthday cakes – one in Lviv and one in Philadelphia.  Many of the celebrants remained on-line for an after-party with live performances and festivities led by the Ukrainian rock singer Taras Chubay, one of Archbishop Gudziak’s favorite Ukrainian musicians.