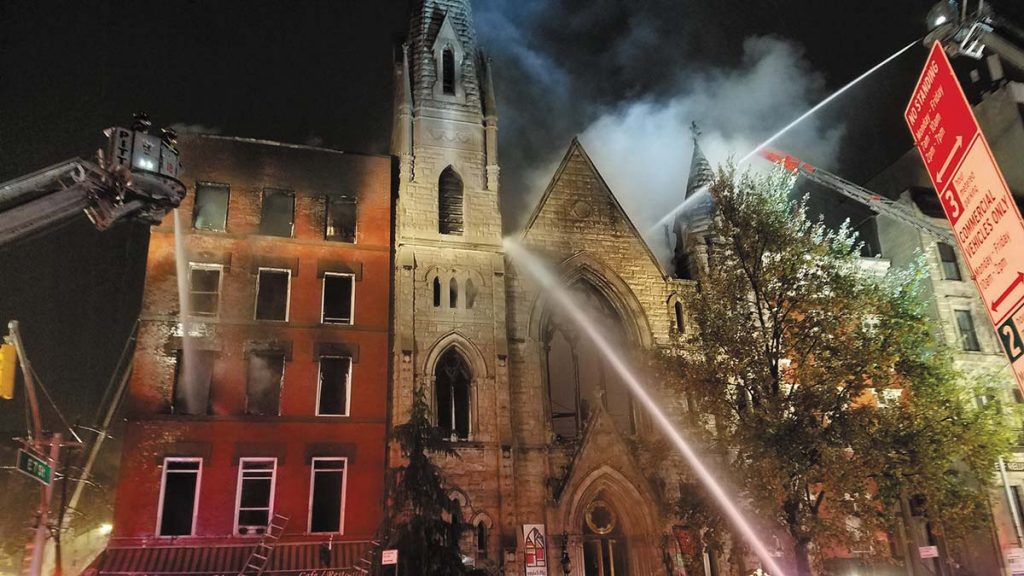 FDNY
Firefighters try to extinguish the fire in the Middle Collegiate Church and the adjecent building. The main office of Selfreliance N.Y. is located in the grey building on the right.

NEW YORK – A massive fire that destroyed a historic church in the heart of the Ukrainian neighborhood in the East Village here on December 5 also resulted in physical damage to the Selfreliance New York Federal Credit Union’s main office at 108 Second Avenue.

Bohdan Kurczak, president and CEO of the credit union, said that the fire did not spread to the building at 108 Second Avenue.  However, firefighters needed to access the credit union’s roof in their effort to extinguish the six-alarm inferno, which was first reported just before 5 a.m.

“The problem for us was that, while the building didn’t burn, the fire department did have to break into our building,” said Mr. Kurczak, noting that the credit union’s main branch suffered water and physical damage as a result of firefighers running hoses from the street up to the roof of the building in order to spray water onto Middle Collegiate Church, located just two doors north of the credit union.

The fire destroyed Middle Collegiate Church, which was built in 1892 and housed the New York Liberty Bell, which rang in 1776 to mark the birth of American independence.  The status of the historic bell was not clear, but the fire destroyed the church’s Tifanny stained glass windows.  The Associated Press reported that “flames shot from the roof [of the church]and the stately front window glowed from inside.”

Also consumed in the fire was an empty apartment building, north of the church, located on the southeast corner of Seventh Street and Second Avenue. The Women’s Prison Association shelter, located south of the church, was also damaged by the fire, but the extent of damage was not known at the time of publication. The buildings consumed by the fire were deemed by NYC Fire Department Assistant Chief John Hodgens to be “total losses,” and the cause of the fire was initially determined to be an accident from the vacant apartment building next door to the church.

That vacant apartment building, located at 48 East 7th Street, was the site of a previous fire on February 10.  Per FDNY Fire Marshals, the cause of that fire was found to be accidental, and the fire at the same location on December 5 was deemed to be unrelated.

Michael Hnatyshyn, a Ukrainian landlord who owns property in Manhattan and lives in Staten Island, said that “with people not paying rent due to eviction moratoriums, I am pretty sure more of these types of accidents will occur, as many landlords will probably not have money to keep up necessary maintenance.”

For the credit union, Mr. Kurczak said that the two biggest issues as a result of the fire are extensive smoke damage throughout the offices and an order to vacate the building, which was issued by the New York City Department of Buildings.  During a phone interview with The Weekly on December 10, Mr. Kurczak said that the credit union is trying to have the main branch reopen as early as next week.

In the aftermath of the fire, the credit union “moved very quickly” to implement emergency plans and worked hard to mitigate any impact the fire might have on its members, Mr. Kurczak said.

“All of our electronic services – home banking, bill payment, etc. – never went down,” he said, adding that the credit union established a temporary office at 98 Second Avenue, where members can conduct their business in person.