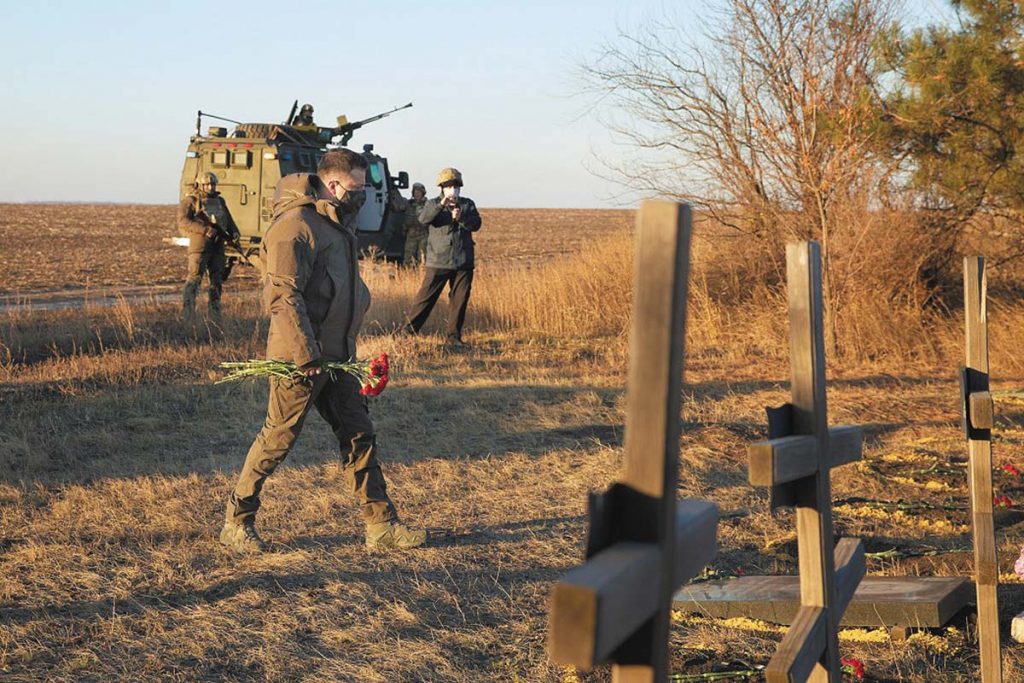 “You always defend Ukraine,” the president said during a ceremony in front of the Presidential Palace.  “Ukraine and all our people will always remember your feat, feel your protection, and bow to your strength,” Mr. Zelenskyy said before a military orchestra performed the Ukrainian national anthem and military personnel raised the Ukrainian flag.

Despite restrictions implemented to address the ongoing COVID-19 pandemic, Mr. Zelenskyy kicked off the official celebrations in the city center before ending the day by visting Ukrainian soldiers fortifying military positions in the Donetsk region.

Standing in front of the Presidential Palace as members of the country’s armed forces lined the sides of the square in front of the palace, Mr. Zelenskyy presented military personnel with state awards and honorary titles.

“Every day and especially today, on your holiday, on the day of the armed forces of Ukraine, we will remember all the sons and daughters of Ukraine who gave their lives for the sake of our future and protection of the country from the Russian aggressor,” the president said following a moment of silence to honor soldiers who have died fighting for Ukraine.

The president stressed that a strong and capable army guarantees the freedom and independence of Ukraine.  He noted that defense funding would not be reduced, and that he would push to ensure the country’s military receives modern weapons and equipment.

“We will never cut corners on our army, and therefore on the security of our own country,” said the president, who also noted that, in gaining NATO’s Enhanced Opportunities Partner status, Ukraine’s efforts to reform its military have moved in the right direction.

Following the official ceremonies in Kyiv, Mr. Zelenskyy met with servicemen on the front lines of the war in the Donetsk region. The president inspected fighting positions occupied by the Ukrainian military and later honored fallen soldiers by laying flowers at grave sites near the front lines.

Mr. Zelenskyy also thanked the families of the military for continuing to support Ukraine’s armed forces, and he added that the government is working to better support its soldiers and their families.

“Since the beginning of the current day, December 6, no violations of the ceasefire have been recorded in the areas of responsibility of Ukrainian units. There has been silence along the entire line of demarcation,” the president said.

“It is thanks to your endurance, resilience, and wisdom that the silence in the east has not only been declared, not only been enshrined in diplomatic documents, but has also lasted for more than four months,” Mr. Zelenskyy said.  “Thank you for not giving in to provocations, for understanding why this is so important. For showing the whole world how much Ukraine and its army do in their effort to end the war,” said the president.