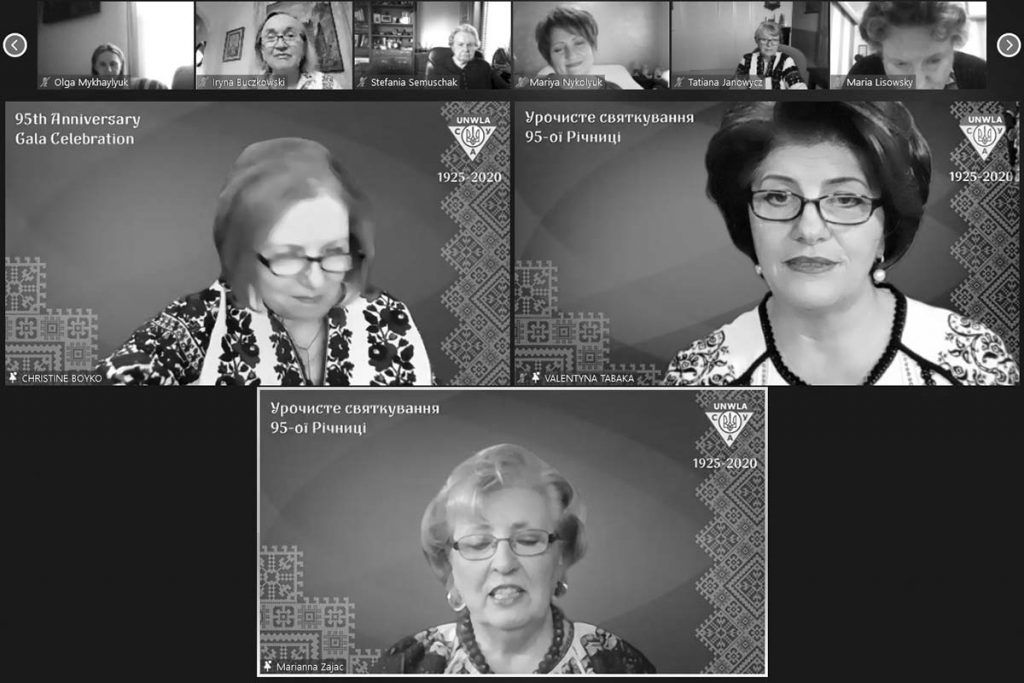 Staff | The Ukrainian Weekly | Subscription
Masters of ceremonies Christine Boyko and Valentyna Tabaka together with UNWLA President Marianna Zajac during the virtual gala.

Over 1,200 people from across North America participated in a celebration of the 95th anniversary of the Ukrainian National Women’s League of America (UNWLA) on December 6.  This virtual gala was a celebration of the generations of unique Ukrainian American women who, quietly and without much fanfare, have accomplished so much over the decades.

Highlighting the members and projects of the organization’s many branches and featuring beloved performing artists from Ukraine, the gala raised over $36,000 for important educational, cultural and humanitarian initiatives provided through the UNWLA.

Ably facilitated by mistresses of ceremony Christine Boyko from Arizona, UNWLA national second vice-president, and Valenty­na Tabaka of New Jersey, UNWLA national officer at large, viewers also heard greetings from the many supporters of the UNWLA who remarked on the important role that the organization has played in Ukrainian American life, and they also spoke of the organization’s contributions to social welfare and education in Ukraine and the U.S.

In 1925, five Ukrainian women’s groups in New York City and vicinity formed a centralized organization whose goals were to inform the free world about events in Ukraine, and promote the preservation of Ukrainian national identity, cultural heritage and ethnic traditions in the United States. The name given to the new organization was “Soyuz Ukrainok Ameryky” – in English, The Ukrainian National Women’s League of America.

Today the UNWLA has branches in 23 states, from the west to the east coast, and counts nearly 1,700 Ukrainian American women among its members.  The mission of the UNWLA has remained steadfast over the past nine decades.  Today, its work continues to center around the preservation of Ukrainian cultural heritage; informing the American public about Ukraine and its culture; providing financial assistance for educational studies into Ukrainian history and culture; and continuing support for the Ukrainian Museum in New York City, which it founded in 1976.

The UNWLA is proud to sponsor a number of impactful initiatives which fall under three major categories: educational, cultural and social welfare.  One of the most recent initiatives, “Spiritual Rebirth of Ukraine Fund,” which began in March 2019, provides financial support to two theological seminaries: the Kyiv Three Saints Theological Seminary of the Ukrainian Greek-Catholic Church and the Volyn Ukrainian Orthodox Theological Academy.

These two institutions focus on the training of future priests who will take their spiritual mission into the eastern regions of Ukraine to encourage and facilitate a spiritual rebirth, especially in this time of war and unrest in the nation.

More recently, the UNWLA spearheaded a funding drive called “UNWLA for USA” and $31,400 was donated to Feeding America, a national organization dedicated to helping those who, as a result of the coronavirus pandemic, may not have enough food to eat.

The UNWLA was among the first Ukrainian American organizations to send aid to Ukraine during the Holodomor of 1932-1933 and, in November 1933, formed a committee to disseminate awareness about the Famine-Genocide in Ukraine. Today the UNWLA is an affiliate member of the U.S. Committee for Ukrainian Holodomor Genocide Awareness and continues the important work of raising awareness and recognition of the Holodomor as a genocide through requests for gubernatorial proclamations, holding Holodomor exhibits and educational lectures and advocating for the inclusion of the Holodomor in genocide studies.

These are just a few of the projects and initiatives undertaken by UNWLA – there are many more.  For additional information, readers can visit the organization’s website at www.unwla.org.  A detailed history of UNWLA will soon be available in book form when “UNWLA 1925-2020. Women’s Community, Citizenship, and Commitment in the Ukrainian Diaspora” by Dr. Martha Kichorowska Kebalo is published in mid-2021.

In her remarks about the longevity of this organization, UNWLA President Marianna Zajac said that “the UNWLA provides its members with a sense of belonging, pride and inseparability, and the UNWLA is a reflection of the Ukrainian soul, Ukrainian heart and Ukrainian culture!”  Ms. Zajac also noted that the UNWLA is open to individuals with fresh new ideas and a desire to do good, while working in collaboration with other like-minded women.