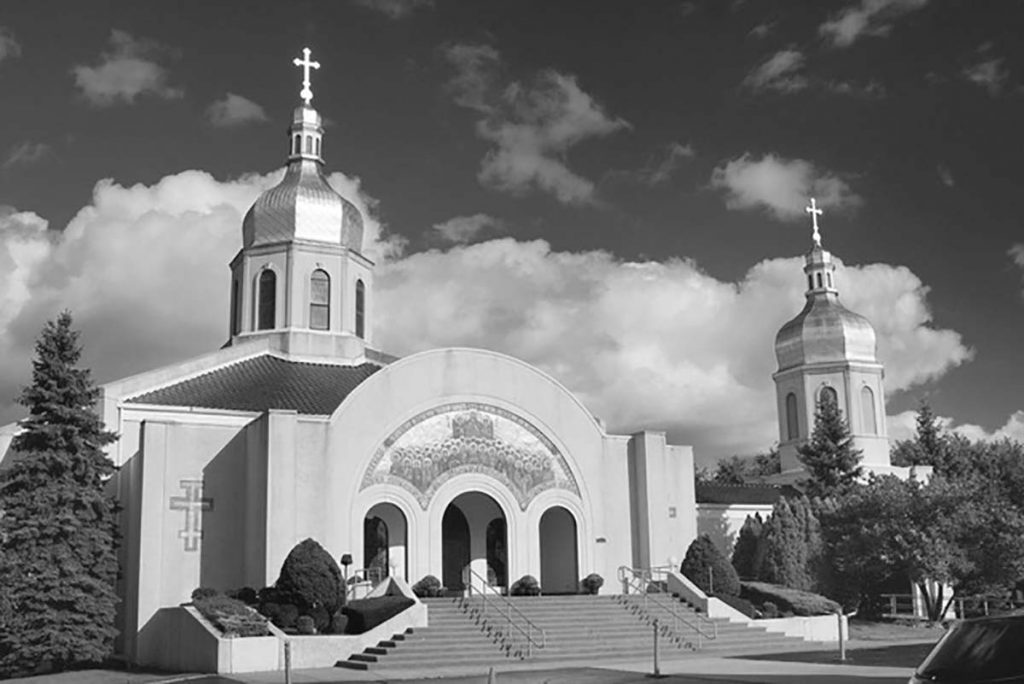 BLOOMINGDALE, IL. – On Sunday, December 13, St. Andrew Ukrainian Orthodox Cathedral (Orthodox Church of Ukraine) in Bloomingdale, Ill., invited the Ukrainian community of Illinois and beyond to participate in a virtual celebration of the feast of the patron saint St. Andrew the “First-Called” and the 50th anniversary of the inception of the parish in 1970.

The Very Rev. Mitered Archpriest Victor Poliarny, vicar of St. Andrew Ukrainian Orthodox Cathedral and secretary for the Orthodox Church of Ukraine in U.S.A. and Canada, officiated a divine liturgy and a moleben to the Holy Mother of God.  For those who participated in the liturgy in person, all regulations and recommendations of local, state and federal agencies regarding COVID-19 were adhered to, and the service was live-streamed on Facebook.

In his remarks on this feast day, the Very Rev. Poliarny noted: “…St. Andrew is one of the 12 disciples of Jesus Christ.  In Ukraine, the memory of St. Andrew the Apostle is majestically and reverently honored, as he is considered the founder of the Ukrainian Orthodox Church. … St. Andrew is also credited for setting a cross and consecrating the ground on which Kyiv was built.”

Reflecting on the past 50 years of the history of the parish, the Very Rev. Poliarny continued in his remarks “…when we think about the past, we will remember how much effort and dedicated work there was in founding and building the community of St. Andrew.  Let us remember our predecessors, let us remember the pioneers and our parents who have dedicated themselves in founding the parish of St. Andrew. … Our church fights against the destructive Russification, against injustice and demoralization of our Ukrainian people.  By the will of God, wherever we are, let us not forget that we are children of our mother – sufferer – Ukraine, descendants of the pious Ukrainian people, who in most difficult times of their history did not forget God, did not lose hope in Him. … At this difficult time in the U.S.A. and in Ukraine, we must believe that light will shine over darkness, that good will defeat evil and better times will come.”

John Jaresko, the president of the church board of St. Andrew, offered a brief overview of the growth of the parish.  “It was no coincidence that on December 13, 1970, the Apostle Andrew was officially selected as the patron saint of our parish,” Mr. Jaresko said.

“The Kyiv cathedral in 1621, during the revival of the Ukrainian Orthodox Church, declared the apostolic origin of Christianity in the Ukrainian lands.  The conciliar decree states St. Andrew the Apostle is the first Archbishop of Constantinople, the Ecumenical Patriarch and the apostle of Ukraine,” Mr. Jaresko said.

Mr. Jaresko said that the first divine liturgy was held in 1970, in an ordinary home in Downers’ Grove, Ill., where seven families gathered with a dream to start a Ukrainian Orthodox Church outside of Chicago.  They later moved to a stable, which sat on the current property in Bloomingdale, Ill.

Today the community of St. Andrew includes a dedicated cemetery; the “stable” was converted into a modern cultural center, which includes a banquet hall, professional kitchen, a school of Ukrainian studies and a branch of Self Reliance Ukrainian Credit Union.  On the grounds of the parish, the Ukrainian Genocide Holodomor Monument stands as a memorial to the more than 10 million victims who were subjected to death by starvation.  The parish grounds also include the Monument to the Heavenly Hundred and all the Heroes of Ukraine, which stands in memory of all of those who have laid down their lives for the statehood of Ukraine.

Closing remarks were delivered by the Very Rev. Poliarny, in which he expressed deep gratitude to those who, through their dedication and hard work, have supported St. Andrew for 50 years, as the parish evolved from “the stable” (1970) to the “cathedral with the golden domes in the Cossack-Baroque style” (blessed in 1988 in honor of the millennium since the Baptism of Ukraine into the Orthodox faith) in Bloomingdale.

A recording of the virtual program can be found on the St. Andrew Ukrainian Orthodox Cathedral-OCU YouTube channel at https://youtu.be/LNTY2u8GuPA.

Maria Korkatsch-Groszko, Ph.D., is vice-president of the executive board of St. Andrew Ukrainian Orthodox Cathedral-Orthodox Church of Ukraine, Bloomingdale, Ill.