Zelenskyy ‘biggest disappointment’ of 2020 as more controversial Cabinet appointments made 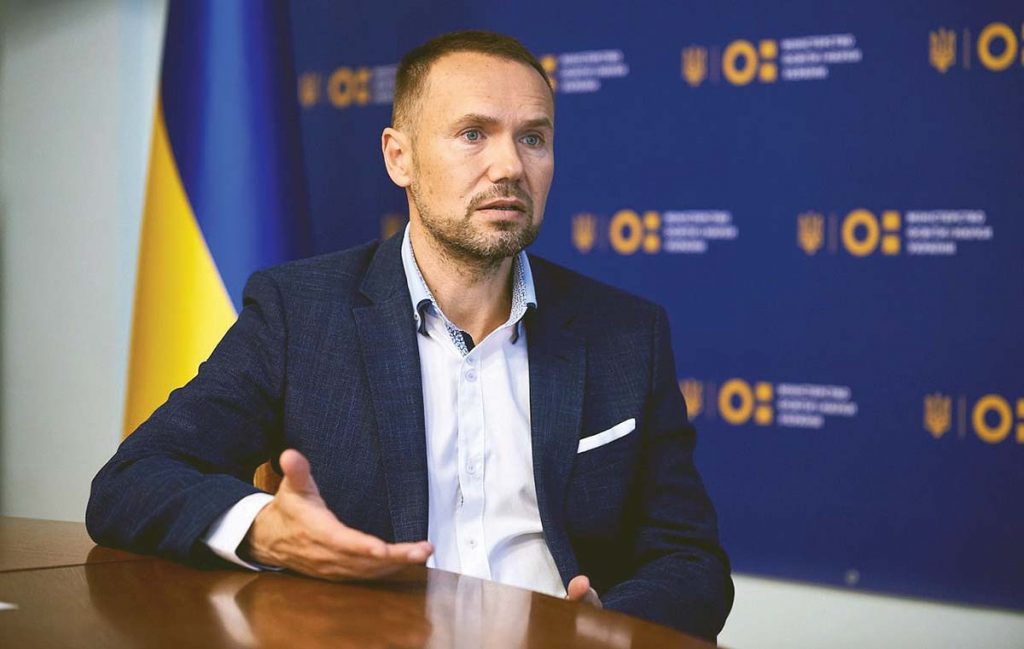 KYIV – As the year ends, a moderate reshuffle in the Cabinet of Ministers and at the executive branch took place over the past 10 days in President Volodymyr Zelenskyy’s administration amid the political newcomer’s dwindling popularity 19 months into his term.

Oleh Tatarov, the president’s deputy chief of staff responsible for law enforcement, said on December 21 that he would recuse himself of certain duties in order to cooperate with investigators and avoid a conflict of interest in a large-scale corruption case in which he is a suspect.

After receiving a notice of suspicion for involvement in the alleged $2.8 million graft scheme from the National Anticorruption Bureau (NABU), Mr. Tatarov said at a briefing the same day that he had “temporarily transferred part of my powers to another employee of the president’s office in order to avoid manipulation.”

NABU head Artem Sytnyk told journalists the following day that the agency is seeking to hold Mr. Tatarov in custody or on bail for which the Specialized Anticorruption Prosecutor’s Office is asking the equivalent of $357,000.

In response, Mr. Tatarov said on the messaging application Telegram that the possibility of his detainment is moot.

“I want to inform the … official [Mr. Sytnyk], who has flirted with corruption, that his public relations campaign will end in the same way as all his previous activities – with nothing,” Mr. Tatarov wrote. “There will not and cannot be any arrest in a completely fabricated criminal proceeding where there is no fact or evidence.”

In August, civic activists balked at Mr. Tatarov’s appointment to the presidential office. Under former President Viktor Yanukovych, he was the deputy head of the main investigation department of the Ministry of Internal Affairs.

During his tenure, he justified the use of violence against protesters during the pro-democracy, anti-corruption Euro-Maidan uprising that ousted Mr. Yanukovych. More than 100 people, mostly protesters, were killed during those protests, now known as the Revolution of Dignity.

“This is an appallingly ill-considered decision and is understandably viewed as a spit in the face by many of those persecuted on the Maidan and the families of those who were killed,” the Kharkiv Human Rights Protection Group said in a statement at the time.

A trained lawyer, Mr. Tatarov had worked within the police since 1999 and has also run a law firm.

The high-level corruption case comes as Ukraine is making preparations to receive the first batches of the COVID-19 vaccine next year. This week, Kyiv is also hosting an online visit by the International Monetary Fund to review Ukraine’s financial outlook and its commitments to fight corruption. Kyiv is looking to unlock the remaining $3 billion of funding as part of an 18-month, $5 billion lending program. 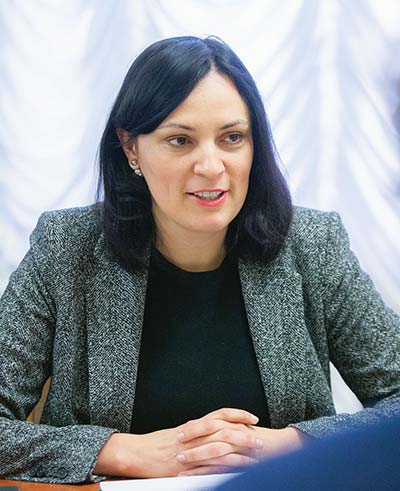 Another change in the president’s office the same day was Yulia Kovaliv, who resigned as a deputy chief of staff responsible for economics and investment. After 15 months on the job, she described her tenure on Facebook as “an unbelievable experience … in a complicated time for the country.”

Ukrainian online news site Pravda reported she would continue to serve as an adviser to the president and return to the state-owned oil and gas company Naftogaz in an unknown capacity.

She had also headed the Office of the National Investment Council, which promoted dialogue between the government and CEOs of foreign investors.

Some foreign businesses had been weary of her appointment to Mr. Zelenskyy’s administration given her past working with ex-President Viktor Yanukovych and his alleged bag man, Serhiy Kurchenko, in 2010-2014.

The Energy Reforms civil society project wrote six years ago that Ms. Kovaliv had in 2007-2010 worked for Gazeks Ukraina, an oil and gas exploration and production company that was controlled by Russian oligarch Viktor Vekselberg.

She previously worked in Mr. Yanukovych’s Coordination Center for the Implementation of Economic Reforms. From 2013, she sat on the supervisory board of Mr. Kurchenko’s media UMH holding group before being appointed as the first deputy minister of economy and trade in then-President Petro Poroshenko’s administration in June 2015.

Both Messrs. Yanukovych and Kurchenko are believed to be hiding in Russia and are wanted in Ukraine for various charges ranging from treason to embezzlement.

The academic community, including the independent National University of Kyiv-Mohyla Academy, and National Agency for Higher Education Quality Assurance (NAQA), have opposed his appointment and accused him of plagiarism.

The Education Ministry and Mr. Shkarlet have denied the accusations.

A former member of Mr. Yanukovych’s once-ruling Party of the Regions, Mr. Shkarlet allegedly plagiarized four academic works. In addition, Ukrainian plagiarism resource false-science.ucoz.ua has found that Mr. Shkarlet “not only plagiarized his doctoral dissertation, but [that plagiarism]was also systemic…at the Chernihiv National University of Technology, where Scarlett worked as rector,” according to reporting by the BBC.

The education minister has repeatedly stated that “there is no plagiarism in my works…and there are phrases taken out of context.”

Evidence of “Mr. Shkarlet’s plagiarism … appears damning. … If proven true, it should certainly be disqualifying,” Andrew D’Anieri, a program assistant at the Washington-based Atlantic Council, wrote on December 21.

Another stain in the president’s Cabinet last week came after Parliament confirmed Roman Leshchenko’s appointment as agriculture minister. The same week, Ukrainian media learned that the Kyiv Commercial Court accepted a lawsuit that alleges he had embezzled $430,000 from a Ukrainian farming company owned by North Dakota farmer Kurt Jacob Grozhans.

Mr. Leshchenko responded to the allegations by saying he had repaid “all debts to the American investor,” Ukraine Business News said in a daily note to the business community.

At an extraordinary Cabinet session this week, another official from Mr. Yanukovych’s presidency was appointed to the government. Vadym Melnyk was named as the head of the State Fiscal Service (SFS) in charge of tax and duty collection.

Until 2013, Mr. Melnyk headed the investigation department covering particularly important cases, and he also worked in the Ministry of Revenue and Duties. In 2014, he worked as deputy chief of the Main Investigation Department of SFS Financial Investigations, and later headed the department. He also has the rank of colonel of the tax police, an agency that no longer exists.

A graduate of the French business university INSEAD, Mr. Vitrenko led a successful arbitration case against Russia’s Gazprom while at Naftogaz. He secured a $2.9 billion award for the state-owned company in a bitter dispute over gas supplies from Ukraine’s belligerent neighbor.

After being introduced as the acting energy minister, Mr. Vitrenko said his priorities would be energy security, European integration and he would work to ensure sustainable energy development.

“I believe that as a priority energy security is a component of the country’s national security,” he said.

As the year draws to a close, numerous polls show that Mr. Zelenskyy’s social capital and trust from the public have sunk to an all-time low since his inauguration 19 months ago.

Two nationwide surveys conducted this month by the Razumkov Center and Ilko Kucheriv Democratic Initiatives Foundation jointly with the Kyiv International Institute of Sociology found that he was “the biggest disappointment” of the year.

Per the latter survey, 28 percent of the respondents believed the Ukrainian president to be the biggest disappointment of the year, whereas four in 10 Ukrainians in the Razumkov poll were disenchanted with him the most.

Mr. Zelenskyy was elected last year with a promise to reduce the outsized role oligarchs have played in politics and the economy, and he pledged to clamp down on widespread corruption in Ukraine.

Mr. Zelenskyy said that his top priority for the coming year is “global” judicial reform, according to an interview he gave to The New York Times on December 16.

Surveys conducted by the country’s three main chambers of commerce, including the American Chamber of Commerce, have all shown that the public believes Ukraine’s unruly judiciary is the principal bottleneck in stamping out graft in the country.

“I believe this is important since the courts are Ukraine’s sore spot, and now there is the High Anti-Corruption Court, now we’re ‘at war’ with a few judges of the Constitutional Court who seek to destroy the anti-corruption structure in Ukraine. They won’t succeed. We will reformat this all,” Mr. Zelenskyy said.