The following article is divided into two parts.  The first part below addresses the timing, place of birth and mother tongue of Ukrainian immigrants to the United States, as well as their distribution within the U.S., and it provides insights into the development of the socio-cultural identity of Ukrainian immigrants.  The second part, which will be published in the following issue of The Ukrainian Weekly, will address Ukrainian immigrant’s characteristics, such as age and sex, education (literacy), knowledge of English, family structure, employment status, class of worker, occupation and homeownership.

Immigration of Ukrainians to the United States is divided into four periods or waves: the First Wave, which took place from the late 19th to early 20th century; the Second Wave, which took place during the interwar period; the Third Wave, which took place after World War II; and the Fourth Wave, which began following Ukraine’s independence in 1991. Thanks to data collected in censuses and surveys, there is reliable information about the Fourth Wave.  Data on the other three waves, however, has been limited for mainly two reasons: first, there was a lack of a clear understanding at the time of the concepts of “Ukrainian” and “Ukrainian language,” especially among immigrants of the First Wave; second, Ukraine was not an independent country during the first three waves.

The main sources of statistics on the First Wave are the Annual Reports of the Commissioner General of Immig­ration for the years 1899-1930, previously analyzed by Profs. Yulian Bachynskyj, Wasyl Halich and Myron Kuropas.

Recently released data from the 1910, 1920 and 1930 censuses provide new information about these immigrants.  The Center for Demographic and Socio-Economic Research of Ukrainians in the U.S. at the Shevchenko Scientific Society has started to analyze the previously unreleased data.

The main difficulty in analyzing the First Wave is that Ukraine did not exist as an independent country and its territory was divided among several countries. Concepts like “Ukrainian identity” and “Ukrainian language” were not fully developed during this period.  As pointed out by Prof. Kuropas in his foreword to the book “Atlas of Ukrainians in the U.S.,” “before 1914, most people who left Ukraine for the United States were illiterate. They identified with their village.  There was no Ukrainian ethno cultural identity.  Many immigrants called themselves Rusyns (Ruthenians) or Little Russians.”

Two census questions are available for identifying immigrants from Ukraine: “place of birth” and “mother tongue.”  They provide two possible definitions of immigrants from Ukraine: a) born in Galicia or Ukraine; b) with mother tongue Ruthenian, Ukrainian or Little Russian. These are very different concepts and define different subpopulations.  Place of birth implies a region with a fixed territory.  Mother tongue – defined as the principal foreign language spoken at home during one’s earliest childhood – is usually a narrower concept. Despite their limitations, these definitions can be used to address at least three issues: a) evaluation of estimates of the size of the First Wave; b) evolution of the immigrant’s understanding of their ethno-cultural identity; c) a more detailed picture of the immigrant’s demographic and socio-economic characteristics than the one available until now (this topic will be addressed in Part 2 of this article). 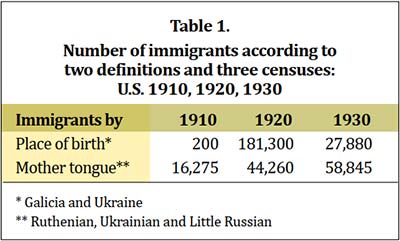 Table 1 presents data on the total number of immigrants for 1910, 1920 and 1930 according to two definitions: a) place of birth (Galicia and Ukraine); b) mother tongue (Ruthenian, Ukrainian, Little Russian).  The numbers fluctuate widely between censuses and according to the two definitions within each census.  They cannot be used to estimate the actual number of immigrants.  Census data also do not provide the elements for estimating the number of Ukrainians born in the U.S.  The only criteria available for defining Ukrainians born in the U.S. is “mother tongue,” and this question was only asked of foreign-born individuals.

If immigrants born in Galicia and Ukraine by mother tongue are tabulated, as well as immigrants with the three mother tongues by place of birth, changes in these data from one census to the next provide insights on the evolution of their ethno cultural identity. 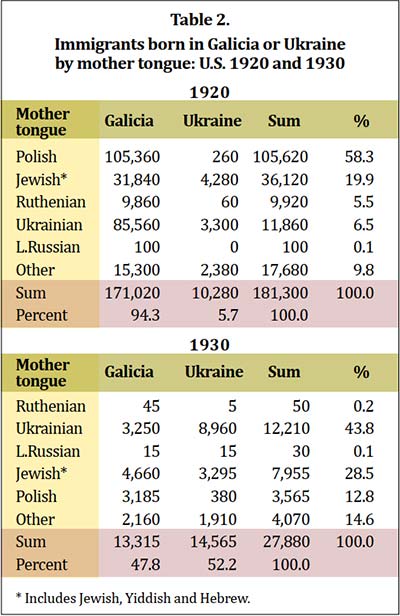 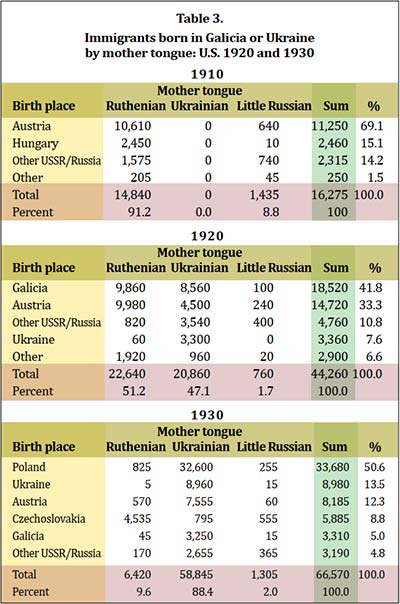 Despite its limitations, the data provide evidence of a process of increased identification with Ukraine as the immigrant’s place of birth and Ukrainian as their mother tongue.  Two possible explanations of these trends are as follows: a) they reflect the dynamics of the formation of Ukrainian ethno cultural identity in the late 19th and early 20th century in Ukraine; b) they are indicators of the success of the enlightenment campaign by the Ukrainian National Association with its newspaper “Svoboda,” and the work of several groups and institutions organized by the immigrants. This process was labelled by Prof. Kuropas as a move “from Ruthenian to Ukrainian.” 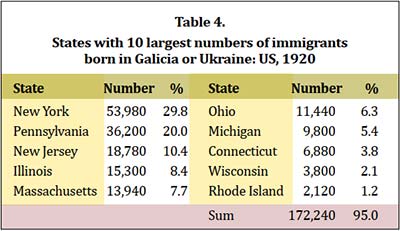 Table 5 presents the percent of immigrants in the 10 most populous metropolitan areas in 1910 and 1920, as well as absolute numbers in 1920.  A comparative analysis of the two years illustrates their progressive urbanization and a residential shift from the northeast towards the west.

Census data on immigrant’s place of residence is a significant improvement on what has been known so far. Prof. Halich’s data on state’s residence is from the Annual Immigration Reports and is based on the immigrant’s desired or expected destination, as stated at the port of entry. This destination is not necessarily the place where they ended up living.  A census registers the actual place of residence of each person and this information is much more accurate.  For example, the cumulative number of immigrants during the 1899-1930 period who named on their arrival Pennsylvania as their state of residence was 114,000, while the actual number residing in the state in 1920 was 20,000.

Oleh Wolowyna is Director of the Center for Demographic and Socio-economic Research of Ukrainians in the U.S. at the Shevchenko Scientific Society, and research fellow at the Center for Slavic, Eurasian and Eastern European Studies at the University of North Carolina at Chapel Hill.  He can be reached via email at olehw@aol.com.