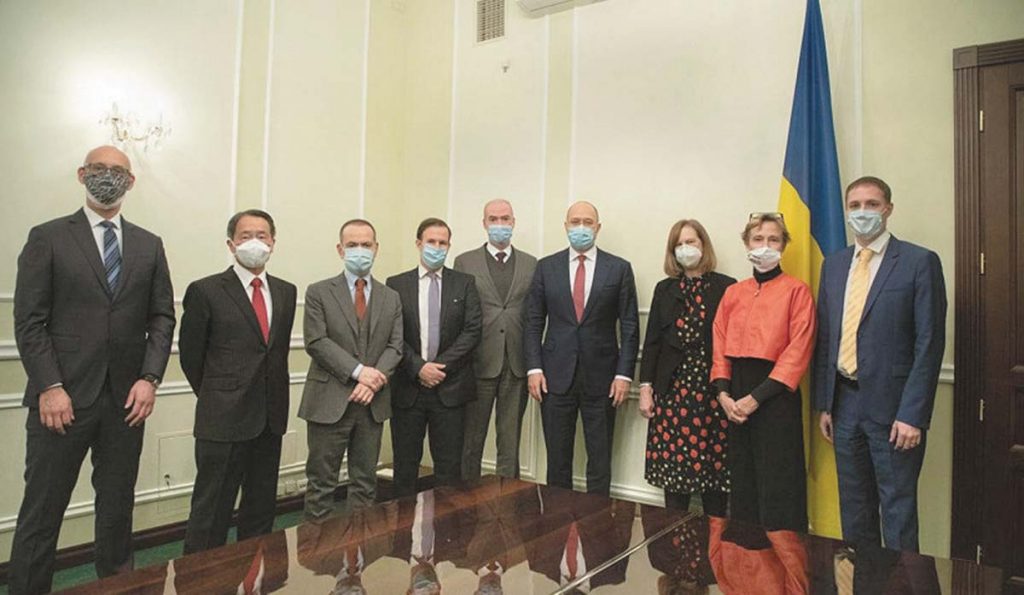 Cabinet of Ministers
Ukrainian Prime Minister Denys Shmyhal (fourth from the right) and Ambassadors of the G-7 States and the European Union met on December 22 to discuss the fight against COVID-19.

KYIV – Ukraine’s Ministry of Health recently approved a plan to immunize the country’s population against COVID-19. The program, developed by experts from the Public Health Center of Ukraine together with experts from WHO and UNICEF, will provide Ukrainians with a vaccination funded by the state. The goal of the plan is to ensure that at least half of Ukraine’s population of about 42 million people receive a COVID-19 vaccine in 2021-2022.

“This plan will be flexible. It will be updated depending on the situation with COVID-19, updated data on vaccines, the availability of the vaccine itself,” said Ihor Kuzin, the director general of the Public Health Center.

The plan will be updated every two weeks in response to developments with the pandemic in Ukraine. The purpose, target groups, logistics routes, medical training, communication, and deployment of mobile teams are all part of the country’s plan to fight the pandemic.

“We are ready to receive the vaccine in the first quarter of 2021. Vaccination of medical workers will be a priority, especially those who work in hospitals that provide treatment for COVID-19,” said Mr. Kuzin, the director general of the Public Health Center.

“Vaccination for Ukrainians from the occupied territory will also be available – the relevant procedure will be approved by a separate plan,” Mr. Kuzin added.

Addressing the country’s vaccination plan, Ukraine’ Prime Minister Denys Shmy­hal noted that the plan includes a priority list for who will receive the vaccine first.

“Given the fact that the purchase of vaccines cannot be done immediately for all citizens, there is a need to determine the priority groups that should receive vaccines first,” Mr. Shmyhal.

He said the government will prioritize the following groups of individuals to receive the vaccine: Healthcare workers, including those directly involved treating COVID-19 patients; Ukrainian soldiers participating in the Joint Forces Operation; social workers; people who live in long-term care and support facilities and staff of such facilities; employees of critical state security structures, including members of the National Police, the National Guard, service members of the Armed Forces, and the Ministry of Internal Affairs; teachers and other education workers; and people who are age 60 or older with weakened immune systems.

Mr. Shmyhal emphasized that, per the plan, the vaccines will be distributed and administered at existing vaccination offices. As of December 2020, there are more than 11,000 such facilities located in Ukraine.

“For vaccinations, there are plans to set up mobile teams, as well as a network of family doctors, through whom vaccinations will also take place,” Mr. Shmyhal said.

Mr. Shmyhal emphasized that the first vaccines are expected in February. To this end, the Cabinet of Ministers is negotiating directly with vaccine manufacturers and with the leadership of the countries where such vaccines will be produced or already contracted.

“The first batch of 8 million vaccines for 4 million Ukrainians is expected in March under the COVAX initiative. Funds for the purchase of vaccines are included in the state budget. Additional negotiations on funding are underway with Ukraine’s international partners,” Mr. Shmyhal said.

On December 30, the Ministry of Health signed a contract to supply the Sinovac Biotech vaccine against COVID-19 to Ukraine. The agreement on the supply to Ukraine has been signed with the Ukrainian pharmaceutical company JSC Lekhim, which, according to Sinovac Biotech, is the only authorized representative of the vaccine manufacturer in Ukraine. The company has purchased nearly two million doses at a cost of approximately 500 hrv per dose.

Per the Ministry of Health, Ukraine will use the Sinovac Biotech vaccine to protect primarily citizens at critical risk of infection and those who perform essential duties against the pandemic. Vaccination will be free for citizens.

Mr. Shmyhal met with the ambassadors of the G7 states and the European Union on December 22.  During that meeting, he stressed that the Ukraine’s most important task is to mitigate the impact of COVID-19 on the economy. He noted that Ukraine, together with the World Bank and the European Investment Bank, was working on the possibility of purchasing more COVID-19 vaccines.

“Ukraine needs access to the vaccine as early as the beginning of the next year so that we can start the process of vaccinating doctors and other groups at risk as soon as possible,” Mr. Shmyhal had said in December. “We appreciate the efforts of our international partners to help Ukraine provide the population with the appropriate amount of vaccine.”

A new strain of mutated coronavirus COVID-19, which was identified recently in the United Kingdom, has been identified in Ukraine.

Infectious disease doctor Viktor Petrov said that one of his patients in the Zakarpattia region of Ukraine contracted this new form of coronavirus. According to Mr. Petrov, in the regions bordering European countries, the coronavirus strain is changing slightly, especially among young people.

“That is, there may not be anosmia (loss of sensitivity to odors), but the virus is quite actively developing in lung tissue, although everything is in a mild form,” Mr. Petrov said. “One such example is my patient Mykola. He travels from Ukraine to the Czech Republic and back. And he has already contracted a new strain, which was announced by the United Kingdom. When it comes to verifying this, Ukraine is not able to identify the virus. But people who have insurance in the EU can detect an already mutated virus. So, I was able to confirm that there are already cases of infection with a new strain of the virus in Zakarpattia,” he said.

“Even with the emergence of a new strain, our test systems will work, and we will detect coronavirus disease,” Mr. Lyashko said.

He also refuted the myth that the emergence of a new strain is associated with the beginning of vaccination in the United Kingdom because the mutation was detected much earlier. Mr. Lyashko said that the coronavirus mutation is a common phenomenon and is not a cause for concern. There are now about 12,000 cases of mutated coronavirus in the world.

The first case of a new strain of COVID-19 was discovered in the United Kingdom on December 14. The British Public Health Service announced on December 20 that a new version of the coronavirus in Britain began to spread rapidly in mid-November.

The Ministry of Foreign Affairs of Ukraine, together with other government agencies, is closely monitoring the situation with the detection of a new strain of coronavirus in the United Kingdom. Ukraine’s foreign diplomatic missions are in contact with foreign governments that have temporarily banned flights from the United Kingdom.