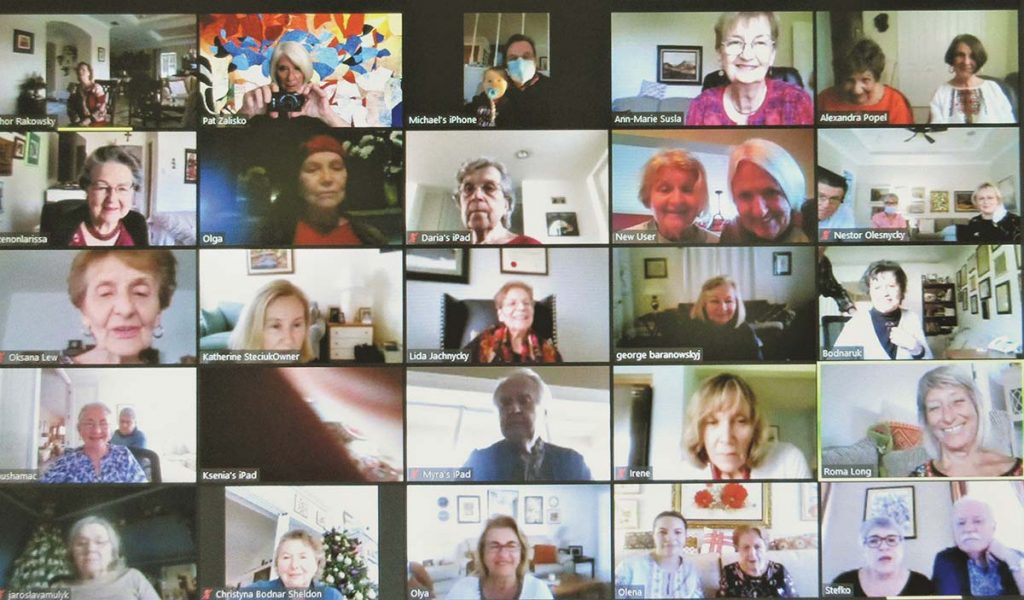 Patricia H. Zalisko
Guests from across Florida’s branches took part in the virtual celebration via Zoom.

NORTH PORT, Fla. – Branch 56 of the Ukrainian National Women’s League of America held an annual Christmas celebration for members throughout the state on January 10. It did so, however, in a not-so-traditional way, via Zoom.

Members of Branch 56 and the remaining Florida branches of the UNWLA were invited to attend the celebration virtually.  More than 60 guests took part in the celebration, which included various musical performances and poetry readings.

The yearly party is typically held for members and their supporters as a way for the organization to thank its Florida members and acknowledge their hard work.  This year’s Christmas celebration was different, yet perhaps more celebratory because participants celebrated virtually and safely.

Branch President Alexandra Popel opened the event, welcoming guests and thanking members for their continued work and dedication on behalf of the UNWLA. After a moment of silence to honor the memory of departed members, Ksenia Rakowsky, who produced, organized and emceed the event, welcomed guests.

Olya Babchuk, a member of UNWLA Branch 56, recited a Christmas poem by Lina Kostenko titled “Christmas Eve.”  A touching vocal performance by three seminarians of the Theological Seminary in Ternopol, Ukraine, followed.  Branch 56 member Lidia Mychalowych recounted her childhood memories of Christmas Eve in Ukraine during the Soviet era, while another branch member, Slava Maluk, described her memories of Christmas in a displaced persons camp in Stuttgart, Germany, during World War II.  The latter brought many participants of the event to tears, as these members recalled in vivid detail their own painful experiences of secretly celebrating Christmas in Ukraine under Soviet rule.

“Mary Did You Know,” an American carol composed by Buddy Greene with lyrics written by Mark Lowry, was performed in its Ukrainian translation by the men’s vocal quartet LeonVoci.  The quartet performed live from Lviv, Ukraine. Ihor Rakowsky read an ancient Ukrainian Christmas poem, while UNWLA Auditing Committee Member Ivanka Olesnycky, together with her husband, Nestor, greeted event participants.

A Christmas greeting was offered by the pastor of St. Andrew’s Ukrainian Orthodox Church’s, Rev. Father Oleh Saciuk, who was joined by his wife, Roxolana. Ms. Rakowsky and Ms. Popel offered closing remarks.  Branch members and guests closed the event with a traditional Ukrainian carol, “God Eternal,” in a videotaped performance by seminarians from the Theological Seminary in Ternopol, Ukraine. Guests prayed for a good new year and they socialized virtually after the program’s conclusion, vowing to hug one another by the end of 2021.

The UNWLA is a not-for-profit organization, founded in New York in the early 20th century by women of Ukrainian descent. Its purpose is to provide education, support and cultural enrichment within the United States regarding Ukraine’s rich cultural and educational heritage. Through its many charitable activities, the UNWLA also supports relief efforts, like providing badly needed medical supplies to areas of Ukraine in the cross-hairs of the hostile Russian incursion; and scholarship programs for children of the Ukrainian diaspora around the world, including the Unites States. The UNWLA also supports the accredited Ukrainian Museum of New York, located in NYC, which was the location where the first waves of Ukrainians to this country flocked at the turn of the 20th century.

Patricia H. Zalisko is the English language press secretary of Branch 56 of the Ukrainian National Women’s League of America.