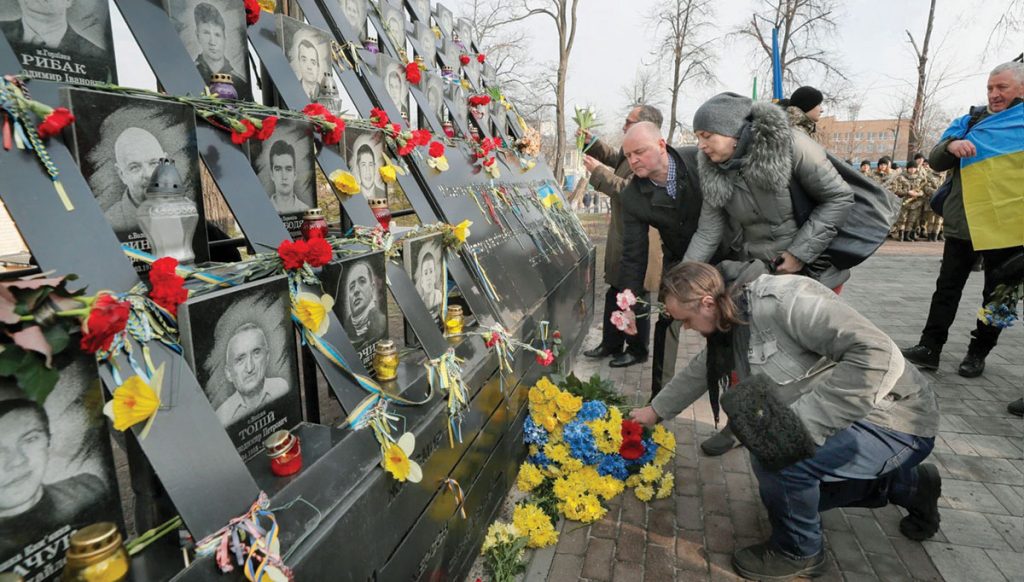 Serhiy Dolzhenko, EPA-EFE
People place flowers on February 18, 2020, at the memorial on Kyiv’s Independence Square dedicated to people who died in the 2014 clashes with security forces.

KYIV – Nearly seven years after the Euro-Maidan protests in the Ukrainian capital reached a bloody climax, the site where protesters clashed with security forces remains a crime scene.

There is no police cordon to give away the forensic significance of the vacant lot atop Institutska Street, but investigators believe it may hold important clues to conclusively establish who gunned down dozens of anti-government demonstrators there on February 20, 2014.

The last and deadliest day of the months-long movement, it led to the toppling of Moscow-friendly President Viktor Yanukovych, who is widely held responsible for his security forces opening fire.

But an effort to honor the dead and their movement with a memorial and museum complex has stalled, highlighting the country’s difficulties in getting closure.

“We need answers as to what happened, who gave the orders, who fired on people, and why this happened,” said Serhiy Horbatyuk, a former prosecutor who oversaw state probes into crimes against Euro-Maidan demonstrators and who in 2019 asked a Kyiv court to halt development on the site.

Case Not Closed
The Ukrainian authorities have indicted more than 200 people related to crimes against demonstrators, Prosecutor General Iryna Venediktova announced late last year, while Mr. Yanukovych has been convicted in absentia of treason for his role in trying to snuff out the protests against his administration’s tilt toward Moscow.

But both post-Euro-Maidan governments have been accused of foot-dragging in delivering justice, and the Kremlin and its supporters in Ukraine continue to work to discredit the Euro-Maidan’s legacy.

The three months of demonstrations erupted after Mr. Yanukovych’s government reversed course on plans to sign a political and economic pact with the European Union in November 2013, uniting disparate political camps and citizens across the country against endemic corruption and Mr. Yanukovych’s flirtation with Russia.

More than 100 demonstrators were killed in the course of the movement, with 49 of the “Heavenly Hundred” slain on February 20. Around a dozen law enforcement officials also died.

Researchers have painstakingly reconstructed the day’s events, peppering the map with red marks denoting civilians shot dead by members of the Berkut “Black Company” from behind barricades set up on Institutska Street, which leads up from Maidan Nezalezhnosty (Independence Square), the focal point of the protests.

Whereas more than 20 officers implicated in the killings escaped prosecution by fleeing to Russian-occupied Crimea, separatist-held areas of eastern Ukraine, or to Russia itself, benefiting from Moscow’s rejection of extradition requests, five who remained in Kyiv were put on trial in 2015.

What emerged as the most high-profile and contentious case stemming from the violence appeared headed for a verdict when the five – Serhiy Tamtura, Oleksandr Marynchenko, Pavlo Abroskin, Serhiy Zinchenko, and Oleh Yanishevskiy – were released as part of a prisoner exchange with Russian-backed separatists in eastern Ukraine.

Of the 25 Berkut personnel implicated in the shooting of unarmed demonstrators in February 2014, 21 fled either to Crimea or Russia, where 15 received citizenship, and three were granted asylum.

While two later returned, Messrs. Abroskin, Zinchenko, and Yanishevskiy remain out of reach from Ukrainian prosecutors, prompting political infighting and torpedoing hopes for an imminent conclusion.

Yevhenia Zakrevska, a lawyer for a group of plaintiffs in the case, blames the Ukrainian leadership – particularly President Volodymyr Zelenskyy – for letting the Berkut officers slip away and showing “weakness” before Russia.

“This was a terrible insult to justice,” Ms. Zakrevska said in written comments.

Further complicating the situation is that current legislation is murky when it comes to prosecuting people in absentia, so while Messrs. Tamtura’s and Marynchen­ko’s fate could be determined by a court this year, proceedings against the other three remain frozen.
“Neither the president, who has a majority in parliament, nor pro-presidential deputies themselves have registered a bill that would solve this problem,” Ms. Zakrevska wrote.
Never Forget?

Ms. Zakrevska believes it’s crucial to follow through with the case, in part to help ensure that similar events never happen again. That’s why she and her clients lobbied Mr. Horbatyuk to request a court order halting construction on the Institutska Street site.
The lawyer says the area needs to remain untouched, at least until the first verdict involving the Berkut officers is handed down, to allow for additional ballistic experiments that could bolster their case and “prevent history from being rewritten” – a reference to the proliferation of conspiracy theories emanating from Moscow, including a baseless one that holds that Ukrainian opposition leaders hired Georgian snipers to intentionally spark bloodshed.

Ms. Zakrevska also claims there is new data and photo evidence, as well as witness testimony, that still needs to be correlated with the scene.

This comes, for now, at the expense of completing construction of the permanent memorial and museum that would “deliver the truth” about the Euro-Maidan movement, according to Ihor Poshyvailo, the director of the complex.

Designers were chosen through an open competition and funds were even paid out to begin building the memorial, the first of the two-part project. Yet officials failed to lay out the conditions or a clear timeline for the work, and Mr. Poshyvailo said that “truly comedic situations” – which Mr. Horbatyuk described as necessary forensic activities – have contributed to delays.

A more serious development came on the anniversary of the beginning of the Maidan protests in November 2020, when police searched Mr. Poshyvailo’s home and office nearby as part of a probe into allegations that money for construction had been stolen. At the request of a pro-Russian opposition party, state investigators also began looking into a claim that Euro-Maidan leaders had staged a “coup” – the same language pushed by the Kremlin.

Mr. Poshyvailo says the funds were already in the pockets of contractors whose work was halted, and Mr. Zelenskyy’s office has criticized the searches as poorly timed, but the incident has added to the controversy over a project originally planned to open in early 2019.

Dangerous Narratives
In the meantime, even those otherwise united in seeking justice for Maidan crimes find themselves divided on the matter, reflecting the politically charged nature of historical memory in Ukraine.

Vitaliy Tytych, an attorney who represents the families of several slain protesters, believes additional investigative work on Institutska Street is unnecessary because of the extensive evidence investigators had already collected before sending the case to court.
He believes holding up plans to build the memorial plays into the hands of the Moscow-friendly narrative that radicals – such as right-wing activists who have protested against the development of the area – are calling the shots in Kyiv.

Much more useful, Mr. Tytych claims, would be to establish – without mythologizing – the context of the Euro-Maidan movement and the consequences the killing of protesters holds for future generations.

“Understanding exactly what the Maidan was, from beginning to end, is an exit from the situation into which [Russian President Vladimir] Putin has corralled us,” he said.