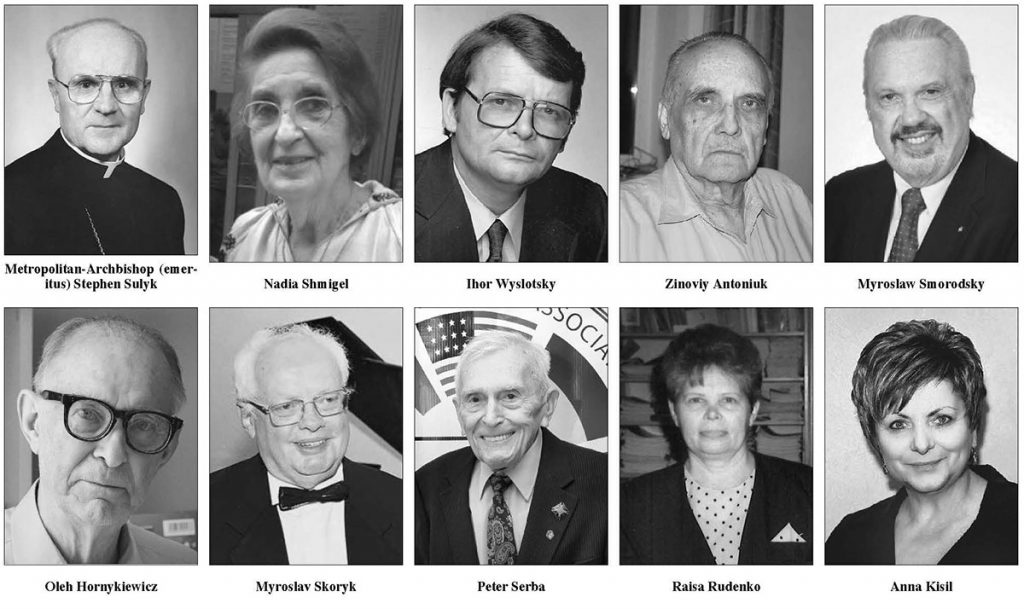 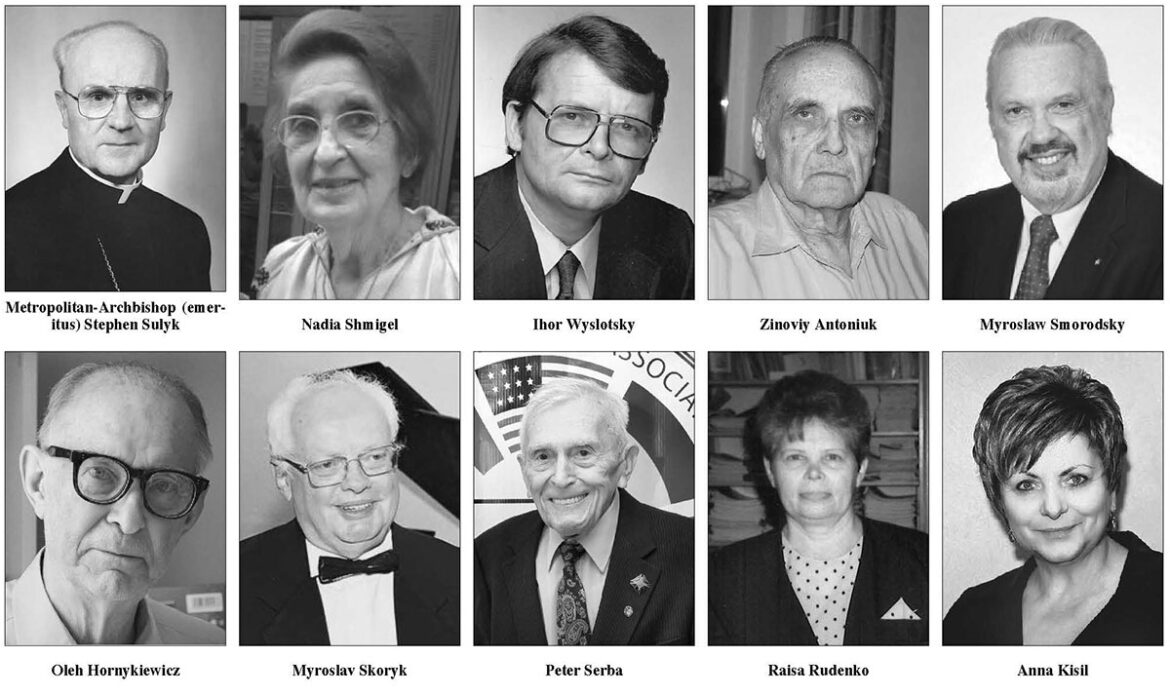 During 2020 our community mourned the passing of many of its prominent members: artists, church leaders, soldiers and community activists. Among them were the following, listed in order of their passing. Information is compiled from news obituaries and death announcements published in The Ukrainian Weekly.

Helen Woskob, 89, State College, Pa.; business partner with her husband Alex in AW & Sons, which became a leader in providing high-quality student housing for Penn State students; made numerous contributions to support Ukrainian culture through the establishment of the Bahriany Foundation, which she chaired for 10 years; contributed to various Ukrainian democracy-oriented and church organizations; at Penn State, established the Woskob Family Endowment in Ukrainian Studies in the College of Liberal Arts and helped to establish The New Century Fund in the College of Agricultural Sciences – January 6.

Doris Kule, 99, Edmonton, Alberta; generous supporter of Ukrainian studies with her husband, Peter; supported numerous educational endeavors, many in the field of Ukrainian studies; donated more than $14 million to post-secondary institutions across Canada, including $1 million to establish the Kule Ukrainian Canadian Studies Center at the Canadian Institute for Ukrainian Studies; awarded the Ukrainian Canadian Congress’s Taras Shevchenko Medal in 2007 for outstanding national contributions in the field of education – March 19.

Eleonora Karpinich Adams, 80, Buckingham, Pa.; taught German and Slavic languages and literatures at Temple University; taught German, Russian and English at Penn State Abington, where she was appointed Division Head for Arts and Sciences in 2008; served as an interpreter for the U.S. State Department throughout the 1990s-2000s, fostering communication between U.S. and Ukrainian leaders – March 19.

Metropolitan-Archbishop (emeritus) Stephen Sulyk, 95, Voorhees, N.J.; headed Ukrainian Catholic Church in the United States in 1981-2000; established the Seminary Endowment Fund to finance the education of seminarians and to provide income for St. Josaphat’s Seminary; served on various committees of the United States Conference of Catholic Bishops and the Synod of Bishops of the Ukrainian Catholic Church; at the request of the Vatican, was involved in diplomatic talks with members of the Orthodox Church in Ukraine in the early 1990s – April 6.

Nadia Shmigel, 87, New York; after retirement from a long career at Talbot Perkins Children’s Services, used her social work experience in serving on the Ukrainian National Women’s League of America Social Welfare Committee in 1999-2002, monitoring humanitarian programs of the UNWLA in Ukraine; was the primary representative in 2002-2012 of the World Federation of Ukrainian Women’s Organizations to the United Nations Economic and Social Council, and actively represented Ukrainian women’s interests in several other NGO committees affiliated with the U.N.; was awarded the title of “Caretaker of Ukrainian Ancestry” in 2019 by women activists in Lviv – April 9.

Ihor Wyslotsky, 90, Chicago; prominent engineer, innovator, entrepreneur; holder of over 50 U.S. patents pertaining to research, development and manufacturing of equipment, systems and materials for packaging food and pharmaceutical products to extend freshness of perishable goods; founder of the Kyiv-Mohyla Foundation of America, supporter of the Harvard Ukrainian Research Institute, co-founder and first president of the Committee for the Support of Ukrainian Studies at the University of Illinois; member and benefactor of the Ukrainian Institute of Modern Art in Chicago – April 12.

Rafael Wenke, 84, Cedar Grove, N.J.; concert violinist, conductor and music teacher; involved with the Schiller Foundation, bringing classical music to the masses; longtime concertmaster of the Ukrainian Opera Ensemble of N.Y., touring the U.S. and Canada; member of the Newark and New York City branches of the Ukrainian Music Institute, teaching students for approximately 50 years and serving in various UMI executive board positions; honored by UMI in 2018 with its Lifetime Achievement award – April 15.

Martha Trofimenko, 87, Toronto; lawyer, university professor, Family Court master and academic writer; taught at the University of Delaware, University of Nitra in Slovakia, and at the universities of Kyiv and Lviv; active in many Ukrainian community organizations, including the Shevchenko Scientific Society in America, where she served as a member of the Governing Board – April 25.

Zinoviy Antoniuk, 86, Kyiv; former Soviet-era dissident, publicist and human rights defender; while serving in the Perm-35 labor camp, played an active role in the struggle for political prisoner status, including hunger strikes; one of the key figures in ensuring that information about the camp and its prisoners was smuggled out; in 1992-1996, served as a member of the Kyiv City Council’s commission to reinstate the rights of “rehabilitated” victims of the Soviet regime, as well as many other councils and boards, including the editorial board of the Kharkiv Human Rights Group’s bulletin Human Rights in Ukraine – April 28.

Myroslaw Smorodsky, 75, Neptune, N.J.; prominent lawyer; co-founder and twice president of the Ukrainian American Bar Association; instrumental member of the legal team that secured compensation for Eastern Europeans held as forced laborers during World War II; legal counsel to the Ukraine’s Mission to the United Nations, its Consulate General in New York and its Embassy in Washington – April 30.

Wolodymyra Tesluk, 97, Hartford, Conn.; teacher at the Hartford School of Ukrainian Studies for 50 years, who inspired generations of students to go out into the world knowledgeable and articulate about their Ukrainian identity – May 6.

Helen Smindak, 91, New York; journalist; longtime columnist and feature writer for The Ukrainian Weekly, including a stint as editor in 1957-1958; pioneered and wrote The Weekly’s very popular cultural column “Panorama of Ukrainian Culture in the Big Apple,” later renamed “Dateline New York” – May 16.

Prof. Oleh Hornykiewicz, 93, Vienna; world-renowned brain researcher and leading neuroscientist; discovered the cause of Parkinson’s disease in 1960; his development of L-dopa revolutionized treatment of Parkinson’s and remains the cornerstone of therapy; received numerous prestigious international honors, awards and distinctions; nominated for the Nobel Prize in Medicine in 2000; instrumental in founding the Center of Brain Research at the Medical Faculty of the University of Vienna – May 26.

Myroslav Skoryk, 81, Kyiv; Ukraine’s most celebrated composer; during his 60-plus year music career, produced numerous compositions – orchestral music, choral music, ballet, opera, chamber music, concerti and solo pieces for piano and violin, as well as music scores for over 40 films, the most famous of which was Serhii Paradzhanov’s “Shadows of Forgotten Ancestors” (1965); honored with numerous awards for his contributions to Ukrainian culture, including People’s Artist of Ukraine and Hero of Ukraine – June 1.

Marta Kolomayets, 61, Kyiv; journalist and prominent public figure; former member of The Ukrainian Weekly’s editorial staff, whose accomplishments included opening the newspaper’s Kyiv Press Bureau, being the first U.S. journalist to be accredited in Ukraine as a correspondent; worked in various organizations benefitting Ukraine, including Partnership for a Transparent Society, the U.S.-Ukraine Foundation and National Democratic Institute; served as director of the Fulbright program’s office in Ukraine since 2013 – August 16.

Peter Serba, 96, Wilmington, Del.; veteran of the Ukrainian Insurgent Army (UPA) that fought against both Russian and German forces during World War II; secretary of Ukrainian National Association Branch 173 since 1954; delegate to every UNA convention since 1958; recognized at the 2018 UNA convention for over 64 years of service – September 12.

Lydia Czorny Matiaszek, 58, Kyiv; cultural and community activist both in the U.S. and Ukraine; founding board member of the Society of Ukrainian Bandurists; co-founder of the Homin Stepiv bandura ensemble; worked with the Ukrainian Free University, organizing summer trips of Ukrainian diaspora youth to Europe, initiating a weeklong bandura course at the Ukrainian Free University in Munich; relocated to Ukraine in 1994, where she was involved with a number of organizations supporting worthy causes, including the USAID Community Connections program and Caritas Ukraine, and fund-raising efforts for the Ukrainian Catholic University – September 17.

Raisa Rudenko, 80, Kyiv; former Ukrainian dissident and Soviet-era political prisoner; widow of Ukrainian Helsinki Group (UHG) founder Mykola Rudenko; served as permanent secretary to the UHG; moved to the New York area in 1988 and served on the editorial staff of Svoboda in 1988-1998, including serving as the Kyiv correspondent in the early 1990s – October 1.

Oleh Koropey, 76, Bowling Green, Ky.; graduate of the United States Military Academy at West Point; decorated for service in Vietnam, including the Bronze Star Medal on six occasions and two Purple Hearts; served a full career in the Army, attaining the rank of colonel, playing prominent roles in Army acquisitions, research and development; taught mechanical engineering at West Point; was a fellow at the Hoover Institution, Stanford University – November 6.

Alex Trebek, 80, Los Angeles; longtime host of the game show “Jeopardy!”; first-generation Canadian, whose father changed the family surname from Terebeychuk in the late 1920s after immigrating from Ukraine; hosted various game shows – including “The Wizard of Odds,” “High Rollers,” “The $128,000 Question” and “Classic Concentration” – but none for so long as “Jeopardy!”, setting the Guinness World Record in 2014 for most episodes hosted by the same presenter – November 8.

Anna Kisil, 59, Toronto; noted community leader; president of the World Federation of Ukrainian Women’s Organizations, vice-president of the Ukrainian World Congress; president of the Fourth Wave International Organization of Ukrainian Communities for North America; board member of the Canadian Ukrainian Art Foundation, the Toronto branch of the Ukrainian Canadian Congress and many other organizations; recognized for her philanthropy, leadership and volunteerism in both Canada and Ukraine; awarded the Ivan Mazepa Cross from Ukraine for significant contributions to the development of international cooperation and community work – November 16.

The Very Rev. Archpriest John Michael Fields, 70, Frackville, Pa.; a lawyer who later entered the seminary and was ordained to the priesthood in 1986; director of communications for the Ukrainian Catholic Archeparchy of Philadelphia; served numerous and varied pastoral assignments, including as editor of The Way, director of Ascension Manor Nursing Facility in Philadelphia and vice-chancellor of the Archeparchy – November 27.