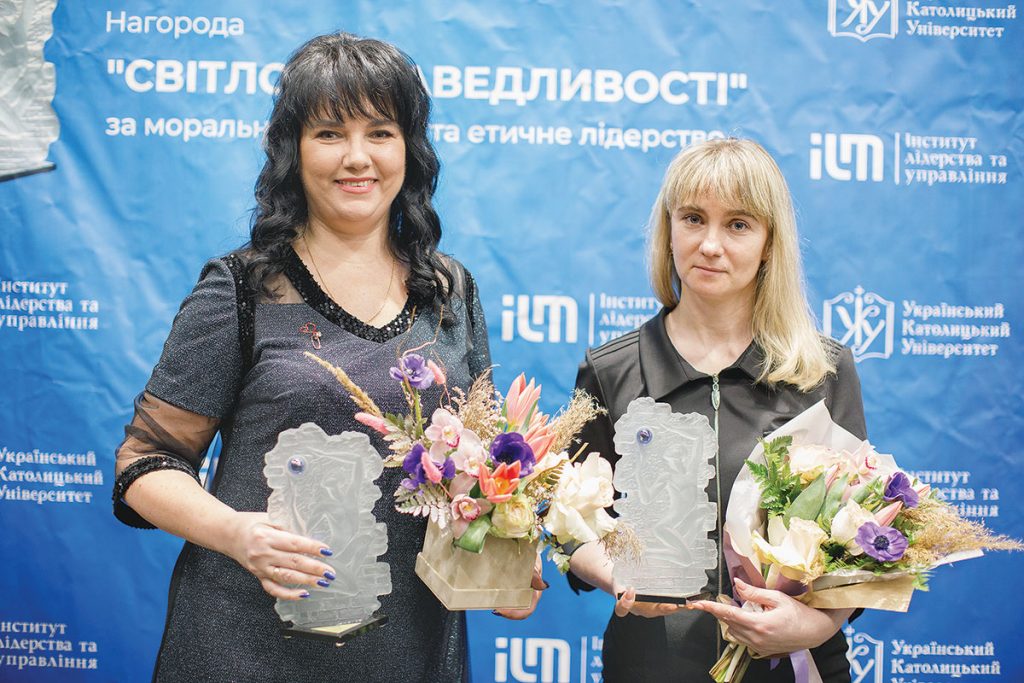 LVIV – Olha Martynenko and Ivan Venzhynovych received the Light of Justice Award from the Ukrainian Catholic University (UCU) at a ceremony here on February 17. The award recognized their moral, spiritual and ethical leadership.

For the first time since the award was established in 2010, it was presented posthumously to Mr. Venzhynovych, a family physician from Pochayiv, Ternopil Oblast, who died from COVID-19 in September 2020. The award was accepted by his wife, Iryna Venzhynovych, head of Pochayiv City Hospital’s laboratory. Mrs. Martynenko is the head of the infectious diseases department at the Central City Hospital in Rubizhne, Luhansk Oblast.

The event was held in UCU’s Sheptytsky Centre in Lviv, with only laureates, organizers, and a handful of speakers joining the event in person, while most of the audience joined the ceremony online in order to keep socially distant during the ongoing COVID-19 pandemic.

“My husband would be extremely proud of this award if he was alive. And now it remains a great honor for our children and me. I wish each of you good health and happiness, which will not be affected by any virus,” said the laureate’s wife, Mrs. Venzhynovych, during the award ceremony.

This is the eighth Light of Justice award ceremony, organized by UCU’s Institute of Leadership and Management. This year, the award committee selected honorees from among individuals who have demonstrated moral leadership in the medical field. The award is designed to draw attention to the importance of ethical principles in leadership in an effort to popularize examples of such leadership in Ukrainian society.

“For me, the award is a great respect and gratitude not only to my work but also to my colleagues,” Ms. Martynenko said after receiving her award.

“This year was difficult. It took away our peace, sleep, and rest,” Ms. Martynenko said, referring to the global pandemic. “Unfortu­nately, it took our colleagues away from us. Instead, it taught us to value life, made us pay attention to doctors’ work and respect it. In difficult times, many caring people extended a helping hand to us – without them, we would not have survived. These were philanthropists, international organizations, deputies, and ordinary people who bought us protective suits. That’s why we started calling them guardian angels. I am glad that there are more and more such angels, and they are now in Lviv as well because you also support and give confidence that we are not alone in this struggle.”

Borys Gudziak, a co-founder of the award, president of the Ukrainian Catholic University, the archbishop of Philadelphia for Ukrainians and the Metropolitan of Ukrainian Catholics in the United States, stressed the importance of the awardees’ work and their constant testimony of modesty, selflessness and fidelity to moral principles.
“Once again, we have the opportunity to enjoy the light of justice,” Bishop Gudziak said. “In this difficult time, we see so many good examples of heroic, selfless acts.”

“We lost one of the columns of our university. Doctors such as Ivan Venzhynovych and Olha Martynenko quietly saved thousands of lives. They are not written about in newspapers and are not mentioned to the general public. Therefore, with this distinction, the award committee wants to emphasize that justice is manifested wherever you are and act. I congratulate the honorees and thank them for their example. Let it be followed by many, and let this award inspire you to continue to be an example because it obliges you to do so to some extent,” said Bishop Gudziak.

In addition to a financial award, the winners received a crystal statuette made by a master of glass art, Stanislav Kadochnikov. The figurine depicts a person who reaches for light, symbolizing the desire to strive for the ideals of freedom and justice.

Mr. Venzhynovych was a family therapist in the Pochayiv district hospital. He was a member of the ambulance crew as a therapist and infectious disease specialist. Since the beginning of the pandemic, in April 2020, he has provided medical care to patients with COVID-19. In almost six months of daily, exhausting work, not a single patient under his care died.

Mr. Venzhynovych’s photo, taken by the Associated Press, among other pictures of Ukrainian doctors, was posted on a billboard reading “Thank You for Life.” The photo is part of a national campaign by the United Nations International Children’s Emergency Fund (UNICEF) in Ukraine. On September 30, 2020, at the age of 51, Mr. Venzhynovych’s heart stopped beating at the Pochayiv Hospital. He died of bilateral pneumonia caused by COVID-19.

Ms. Martynenko, who identified the first patient with COVID-19 in Ukraine, began training specialists in the infectious diseases service of Luhansk oblast and her department’s staff on the pandemic in January 2020. For the first two months, her department was the only one to receive COVID-19 patients from all over the Luhansk oblast. Ms. Martynenko also conducts educational activities for people in the city and the region.

The Light of Justice award was founded in 2010 by Bishop Gudziak, then rector of UCU, and the late Dr. Anastasia Shkilnyk, a Ukrainian Canadian philanthropist, author and academic.