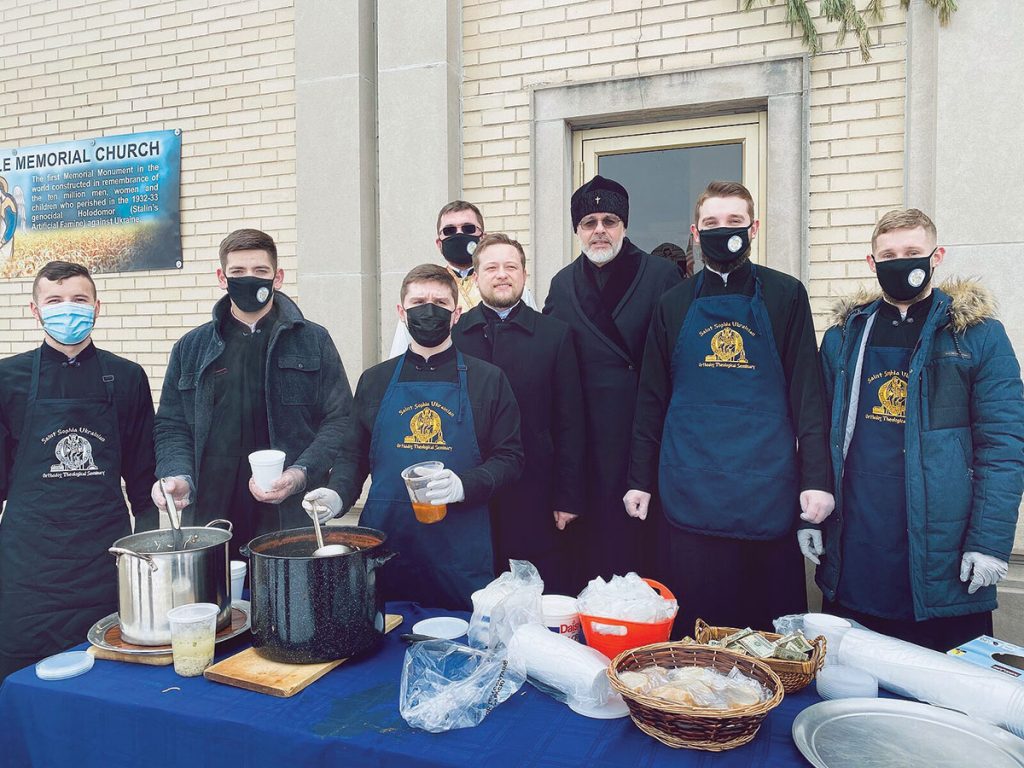 SOMERSET, N.J. – The Ukrainian Orthodox League (UOL) hosted a Souper Bowl Sunday fundraiser in February to raise funds through soup sales to benefit the work of St. Andrew Ukrainian Orthodox Society of the Ukrainian Orthodox Church of the U.S.A. (UOC-U.S.A.), which sponsors soup kitchens and orphanages in Ukraine. Multiple events were planned for February 7 but, due to snowstorms, some were postponed until February 14.

Seminarians of the St. Sophia Ukrainian Orthodox Theological Seminary, through its own chapter of the UOL, hosted the soup fundraiser on February 14 following divine liturgy. Through the generosity of donors, the seminarians were able to raise $1,000 that will go toward the work of the St. Andrew Society.

UOL parish chapters from across the U.S.A. participated through their home parishes. Ss. Peter and Paul Ukrainian Orthodox Church in Youngstown, Ohio, made headlines by offering soup for free, noting the great need within the local community. Any voluntary donations that were collected were earmarked for the St. Andrew Society.

“While we will have a basket out for freewill giving, we don’t expect people to do that because we realize that people in our own community also need food,” Ann Woloschak, a youth group advisor at the parish, told WKBN News on February 6.

The UOL is a national volunteer organization of members of the Ukrainian Orthodox Church of the USA who are committed to promoting the Orthodox faith, supporting the church, developing youth and encouraging their active participation in the church, and preserving Ukrainian heritage and culture. The major goal of the UOL of the U.S.A. is to serve the Ukrainian Orthodox Church and the Holy Eastern Orthodox faith, and to do so by exemplifying the meaning of the emblem and the motto “Dedicated to Our Church, Devoted to its Youth.”

St. Andrew Ukrainian Orthodox Society, founded in 1990 by the UOC-U.S.A. as a religious and charitable organization, is an integral ministry of the UOC-U.S.A. through its philanthropic mission, which focuses on providing humanitarian assistance to the needy and supporting church-related projects in Ukraine.

The organization provides aid to the needy, orphans, the elderly and refugees in Ukraine, as well as financial and logistical assistance to seminaries in Ukraine and scholarships for theological students to study abroad (through the Very Rev. Dr. Wolodymyr and Halyna Lewytzkyj Seminarian Scholarship Foundation, among others). The organization also publishes religious literature and provides assistance toward medical projects and church restorations. Since its founding, St. Andrew Society has raised over $1.3 million for religious, educational and humanitarian projects.

Its Soup Kitchen program provides over 4,000 hot and nutritious meals every month at cafeterias, churches or social service centers for the needy elderly. The soup kitchens are staffed by volunteers in local communities or by church-affiliated institutions and organizations.

Donations to the program can be sent to St. Andrew’s Society, Ukrainian Orthodox Church of the U.S.A., P.O. Box 495, South Bound Brook, NJ, 08880. For more information, readers can e-mail saint.andrew.society@uocusa.net, telephone 732-356-0090, or visit the UOC-U.S.A. website, www.uocofusa.org, or the UOL’s website, www.uolofusa.org.