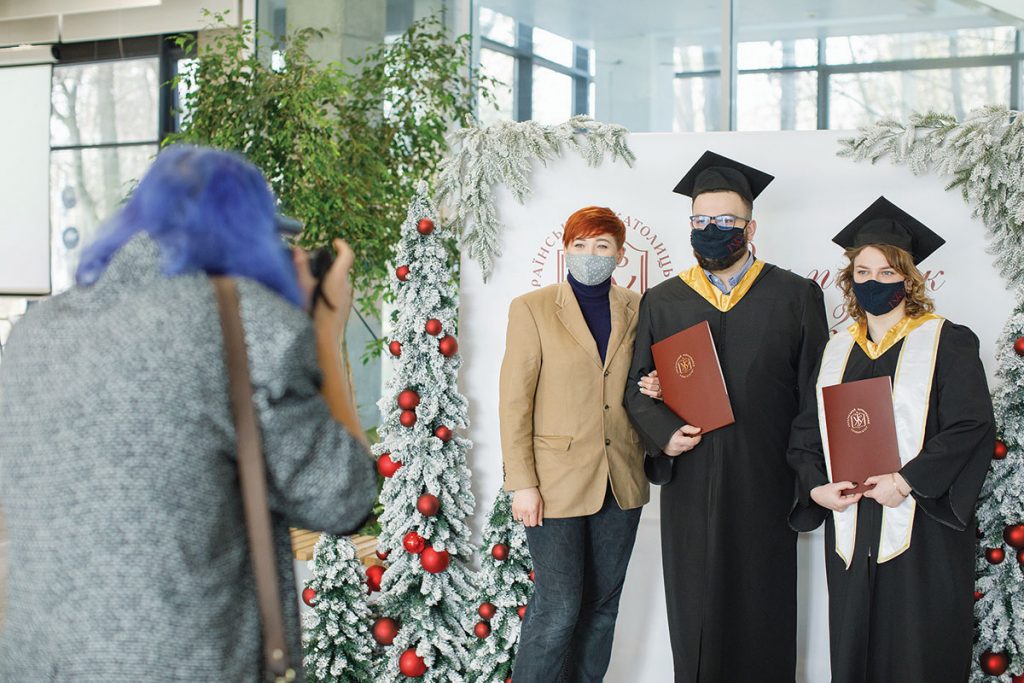 LVIV – In nearly two decades since it was established in 2002, the Ukrainian Catholic University (UCU) has grown from a fledgling institution of higher education in Ukraine with programs in theology and history to a full-fledged university with programs that have won acclaim throughout the country. With this success in mind, the university held an online panel discussion in which five leading figures discussed and reflected on the university’s growth and its accomplishments.

Adrian Slywotsky, a business strategist at the global management consulting firm Oliver Wyman, said that in order to continue to grow and develop organizations need to have an external view of what they are doing well and what needs improvement.
“Even the most successful organizations, if they speak about themselves internally and do not open all the windows to get the best of an external perspective, they will always run into trouble,” Mr. Slywotsky said.

Participants of the panel discussion, titled “Ukrainian Catholic University: Modus Vivendi,” were asked to consider whether UCU’s success can be replicated in Ukraine.
Mr. Slywotsky, who moderated the discussion here, said that understanding what makes UCU unique and successful is important not only for the university, but those lessons learned can and should be applied by other individuals working in different fields and industries throughout Ukraine.

As a result, Mr. Slywotsky asked panelists to consider to two overarching questions: what makes UCU unique and enables it to add value to society? And can that essence, whatever it is, be replicated in whole or in part by people who want to make positive change in Ukraine?

“Without an overly stable financial and institutional framework, in a relatively short period of time, UCU succeeded in becoming a real competitor in the world of higher learning and academic institutions – in Ukraine and beyond,” said Prof. Buch, who is also a lecturer of bioethics at UCU.

Indeed, the university’s reputation has grown both in Ukraine and beyond. Among its best known schools are the Lviv Business School (LvBS), the School of Journalism and Communications, as well as the programs in technology and business analytics, which receive top ratings from the community of computer science programmers in Ukraine.
For several years in a row, the university has admitted the country’s top students: 56 percent of the university’s first-year students in 2020 were among the top 5 percent of Ukraine’s applicants, according to the Ukrainian Center for Educational Quality Assessment.

Taras Kytsmey, founder and managing director of SoftServe, an information technology company with headquarters in the U.S., agreed that UCU is a young but competitive university with strong values as its competitive advantage.

Mr. Kytsmey noted that he has several colleagues in the IT sphere who switched from working in that industry to teaching at UCU. He asked them why they decided to make the switch to teaching from the more lucrative IT field.

“It’s not about the compensation. It’s about values,” said Mr. Kutsmey, adding that these values make UCU truly unique.

The university had been a dream for decades before it became a reality. It was founded in 2002 as the successor to the Greek Catholic Theological Academy, which was founded in 1928-1929 by Metropolitan Andrey Sheptytsky in Lviv, which at that time was part of Poland. The academy closed in 1944, but reemerged as the Ukrainian Catholic University in Rome in 1963. In 1994, the original school was recreated under the name of the Lviv Theological Academy, and in 1998 it became internationally recognized by the Congregation for Catholic Education.

“It’s a unique product of its place and time, geography and history,” said Robert Brinkley, the former ambassador of the United Kingdom to Ukraine.

“UCU is what it says in its name – it’s Ukrainian, it’s Catholic, it’s a university. It’s in Ukraine, but it’s looking outward to the world,” said Mr. Brinkley, who added that the university has been shaped by leaders who built strong teams and institutions on the basis of the university’s mission. He added that UCU’s alumni have also helped build the university’s reputation throughout the country.

When Patriarch Josyf Slipyj issued a decree to establish the Ukrainian Catholic University in Rome, there were no students, no lecturers, no buildings and no money.
The same can be said when Archbishop-Metropolitan Borys Gudziak, president of UCU and a graduate of Harvard University, started the process of reviving the Lviv Theological Academy in the early 1990s before it emerged in 2002 as the Ukrainian Catholic University.

That process has been enriched from a kind of “kairos,” said Prof. Buch.

“According to biblical understanding, ‘kairos’ refers to a time shaped by God’s will and providence, the ‘right moment’ in the world of human beings,” Prof. Buch said. “This presupposes a gift. Thus, no real replication of UCU is possible. But many of the elements that made UCU unique may well serve as paradigms or stimulating examples for others, at other places, in different contexts,” said the German theologian, who has been to Ukraine dozens of times when he worked with a foundation that financially supported UCU and the Ukrainian Greek-Catholic Church.

An issue the panelists discussed with special attention was the tension between Catholic identity and the need to witness in the modern, secularized world.

“The tension between being too Catholic and not Catholic enough is a universal problem of all Catholic universities,” said the famed Polish director Krzysztof Zanussi, adding that the concept of a university was conceived by the Catholic Church.

Mr. Zanussi noted that the university is an asylum of free minds, good will and the quest for truth. The Polish-born film director said he is deeply concerned that some Catholic universities succumb to postmodern doubt about the very existence of truth.

“Truth is like a horizon which will never be reached. But we know that there is a horizon, and it attracts us, it has a magnetic power. If we lose this belief, we lose belief in our future,” Mr. Zanussi said.

“The role of UCU is to help people remain optimistic and have spiritual aspirations and belief in the possibility of the growth of the human being,” said Mr. Zanussi.

Mr. Slywotsky called UCU “the university that listens and invites people into a relationship.”

He recalled a meeting with Archbishop Gudziak, who was the UCU rector at the time, and sponsors in the United States. Instead of asking for money, Archbishop Gudziak invited them to visit a then tiny and modest Ukrainian institution.

“All of us were expecting to hear ‘Donate, donate as much as you can,’” Mr. Slywotsky said. “Because in our world we are programmed to expect that. But we heard ‘Please come visit us.’”