Ukraine braces for Russia’s next moves as Zelenskyy offers Putin meeting in DonbasPresident enables call-up of army reserves as 120,000 Russian troops at border 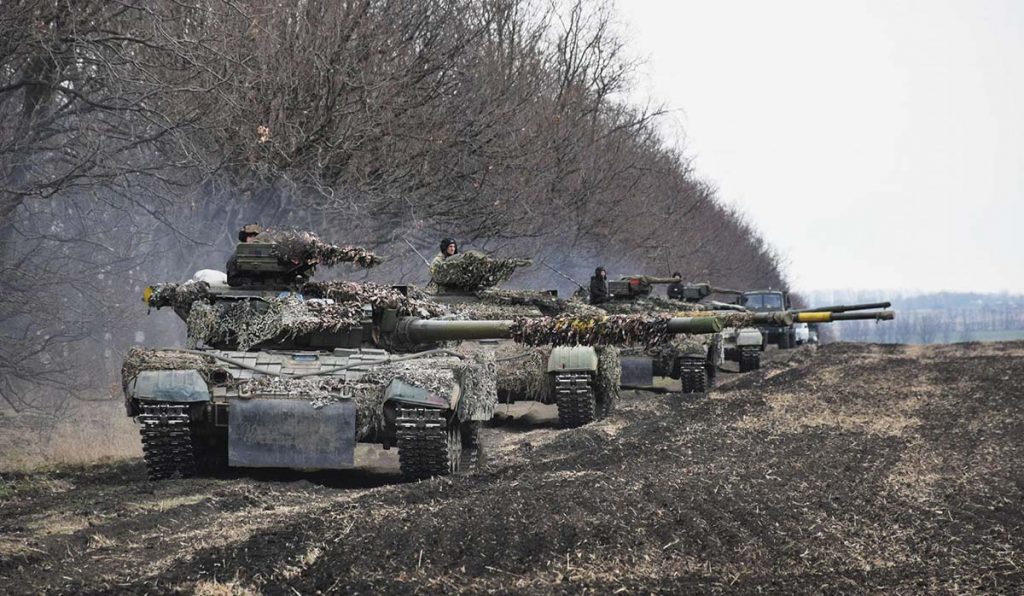 Joint Forces Operation of Ukraine
A row of Ukrainian tanks hold drills in the war zone of eastern Ukraine on April 20.

KYIV – Ukrainian President Volodymyr Zelenskyy challenged his Russian counterpart Vladimir Putin to a meeting in the war zone of eastern Ukraine as the country’s warring neighbor has now amassed more military forces than when it first invaded in 2014-2015 amid a high-intensity war.

In addition to deploying 120,000 troops around Ukraine’s state border and in occupied Crimea, Moscow has limited maritime traffic through the Azov and Black seas, and vastly reduced the supply of diesel fuel, a critical component of the country’s industrial economy.

“Does Ukraine want a war? No. Is it ready for it? Yes,” Mr. Zelenskyy said in a televised address to the nation on April 20. “Ukraine does not start a war first, but Ukraine always stands to the last man.”

Ever since Russian began building up its military near the Ukrainian border in March, Moscow has eschewed direct dialogue with Kyiv, including phone calls, and refused to send a delegation to a recent emergency meeting at the Vienna headquarters of the Organization for Security and Cooperation in Europe (OSCE) that Ukraine called to discuss the military concentration and escalation in war.

More than 30 Ukrainian servicemen have been killed since the beginning of the year.

“Mr. Putin!” Mr. Zelenskyy said. “I am ready to go even further and invite you to meet anywhere in the Ukrainian Donbas, where there is a war.”

It was the latest sign of concern from Kyiv that Russia could seize more territory as Ukraine’s diplomatic corps has called for more military assistance from its allies and membership in NATO, a defensive alliance.

To bolster the standing army of some 250,000 active-duty personnel, Mr. Zelenskyy signed a law on April 21 to allow for the conscription of reservists within 24 hours without announcing a mobilization.

The law will help quickly deploy additional manpower to augment defensive forces, which will “significantly increase their combat effectiveness during a rapidly growing military aggression, as well as quickly increase the combat potential and respond to sudden threats to national security,” the president’s office said in a statement.

Amid the flurry of diplomatic activity, Ukrainian Foreign Affairs Minister Dmytro Kuleba provided an assessment of the challenges Kyiv is facing at a monthly video conference this week with the foreign affairs ministers of the European Union.

“Kyiv’s steps towards conflict resolution are not reciprocated by Moscow,” he said. “What is especially worrying is the military build-up in the proximity of the Ukrainian border and in the illegally annexed Crimea.”

In his summary of the EU Foreign Affairs Council, the foreign affairs minister of the 27-nation member bloc, Josep Borrell, said, “we must continue to urge Russia to de-escalate and defuse tensions, and we should all push back on Russia’s attempts to portray itself as a mediator, rather than a party to the conflict.”

Russia will on April 24 for six months start blocking foreign naval ships and state vessels in parts of the Black Sea, including near occupied Crimea and the Kerch Strait where crucial commercial shipping lanes take cargo to and from Ukrainian ports.

Moscow also restricted flights to parts of Crimea and the Black Sea, issuing a notice to airmen (NOTAM) for April 20-24.

Kyiv, the U.S. and the EU swiftly condemned the restrictions.

He added that “Russia has a history of taking aggressive actions against Ukrainian vessels and impeding access to Ukraine’s ports in the Sea of Azov, impacting Ukraine’s international commerce.”

As of April 18, Russia had 15 warships in the Black Sea; 10 of them are landing ships capable of launching amphibious attacks to deliver up to 2,000 people and 40 tanks simultaneously at any point along the coast.

Due to the heightening tensions, the U.S. Federal Aviation Administration warned airlines to use “extreme caution” along the Ukrainian-Russian border, and required airlines to give 72 hours notice before flying there.

Flight tracking websites monitored by The Ukrainian Weekly on April 21-22 showed that a U.S. and British spy plane, as well as a U.S. Global Hawk drone were flying over Ukraine’s eastern border area and near Crimea.

Images taken March 27-April 16 included rows of military hardware and at least a dozen Su-30 fighter jets on the peninsula and along the Russian-Ukrainian border.

Meanwhile, HBO’s Axios media outlet reported that Russia’s actions near Ukraine’s border and waters, officially to conduct military exercises, “takes up 27 percent of the Black Sea – a proportion that has steadily crept up, in a sign of efforts to establish de facto control over international waters.”

It based the information on a “leaked” Ukrainian Defense Ministry memo it says was obtained and which finds a “high probability” that Russia may be seeking to provoke Ukrainian forces in order to create a pretext for a military incursion, as it did in Georgia in 2008.

Ben Hodges, the former commanding general of the U.S. army in Europe, tweeted on April 22 that “Russian use of force in the Black Sea region started in 2008 in Georgia,” when a five-day war ended with two provinces, South Ossetia and Abkhazia, switched to de facto Moscow control.

“Our repeated collective failure since then to hold them [Russia] accountable, to stop them, has led us to what I consider to be imminent escalation of violence in Ukraine,” Mr. Hodges added.

The Ukrainian president’s appeal for help in Paris on April 16 ended with rhetoric of condemnation from French counterpart Emmanuel Macron and little else.

Following lunch at the Elysée Palace, both held a video-link discussion with German Chancellor Angela Merkel on rising tensions along Ukraine’s border.

“We see an escalation of the situation,” Mr. Zelenskyy said. “Thirty soldiers have been killed this year . . . We need to move very quickly now from words to direct steps” towards implementing the Minsk peace agreements from 2015.

After the bilateral meeting, Mr. Macron stated that clearly defined red lines need to be drawn regarding Russia without specifying what they were.

In response, Mr. Putin said at his yearly state of the nation address on April 21 that “I hope that no one will think about crossing the ‘red line’ with regard to Russia. We ourselves will determine in each specific case where it will be drawn.”

Ukraine was hardly mentioned during the address, but Mr. Putin referred to the 2014 Revolution of Dignity as a “coup d’etat” and twice conspicuously referred to Viktor Yanukovych, whom the revolution had ousted, as “the president of Ukraine.”

The following day, Kremlin spokesman Dmitry Peskov told journalists at a briefing that the Russian president “was notified” of Mr. Zelenskyy’s proposal to meet with him in the eastern Ukrainian war zone.

“If the president deems it necessary, he will answer himself. I have nothing to say at the moment,” Mr. Peskov said.

Following Mr. Zelenskyy’s France trip, the political advisers of Germany, France, Ukraine and Russia met on April 19 in what is known as the Normandy format. The state leaders from all sides have twice held talks to devise a roadmap for achieving peace in the Donbas War known as the Minsk agreements.

Not much headway was made to ease tensions and Russian officials called the meeting a “failure.”

The move by Russia’s Rosneft coincided with planned maintenance at the Belarus Mozyr refinery. Ukraine consumes more than 7 million tons of diesel yearly, importing two-thirds of its needs, mainly from Russia and Belarus, Reuters reported. Severe shortages could take effect in May if alternative supplies aren’t found.

Infrastructure Minister Vladyslav Krykliy said on April 21 that the Ukrainian government’s seizure of a diesel pipeline in February from pro-Russian politician Viktor Medvedchuk affected diesel supply in the country. The pipeline was responsible for 20-25 percent of diesel inflows into the country.

The seizure was part of a package of sanctions that Mr. Zelenskyy’s administration imposed on the lawmaker, who has direct access to the Kremlin. Three television channels known for their pro-Russian rhetoric associated with the politician were taken off the air as part of the sanctions as well.

Mr. Medvedchuk has called the sanctions an act of “political persecution.”