Chicago community celebrates both historic and contemporary heroes of Ukraine 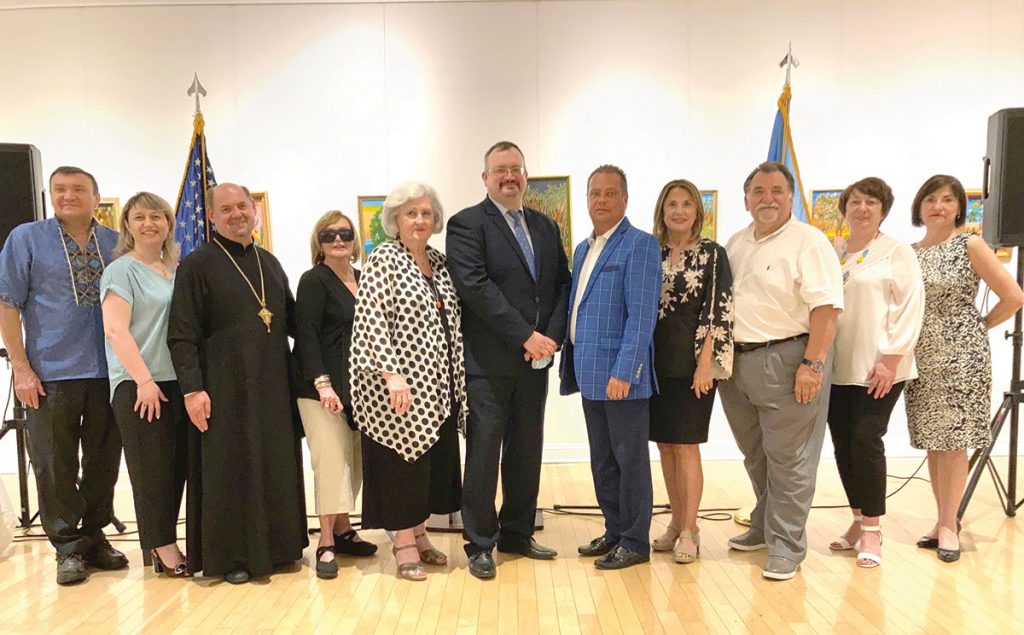 CHICAGO – Initiated by the Ukrainian organization “Pomarancheva Khvylia,” in collaboration with the Ukrainian Congress Committee of America-Illinois Division, the Ukrainian community of Chicago gathered on May 22 to celebrate Heroes’ Day of Ukraine.

Members of the Ukrainian community gathered at the Ukrainian National Museum of Chicago for this year’s commemoration. Vasyl Tretyak served as master of ceremonies for the event.

The day is dedicated to all Ukrainians who gave their lives for the freedom and independence of Ukraine throughout the entire history of the nation, from those who fought on behalf of Kyivan Rus to those Ukrainians currently defending their country in the ongoing war in the Donbas. The day was first celebrated in 1941 on May 23, which is the day most Ukrainians in the west of the country commemorate the country’s heroes.
The gathering began with the singing of the U.S. national anthem by Ksenya Lev­kovych and the Ukrainian national anthem by Solomia Khudyk. A recognition of speakers and guests followed. Those recognized included Andriy B. Futey, president of the Ukrainian Congress Committee of America and vice-president of the Ukrainian World Congress; Consul General of Ukraine in Chicago Serhiy Koledov; Dan I. Diaczyn, president of the Ukrainian Congress Committee of America-Illinois Division; the Rev. Ivan Lymar of St. Volodymyr Ukrainian Orthodox Cathedral in Chicago; Roman Yatskivskyy, president of “Pomarancheva Khvylia” and organizer of the event. The event also included representatives of the community organization Belorussians in Chicago.

An opening prayer was led by the Rev. Ivan Lymar, who took a moment to remind the audience about the heroes of the liberation struggle of Ukraine at different times in the history of Ukraine.

“Currently, this holiday is not official; but the tradition of honoring heroes on May 23 is gaining popularity,” Mr. Koledov said. “May is the month in which Mykola Mikhnovsky, founder of the Ukrainian independence movement ideology in the late 19th-early 20th century, [as well as other]leaders of the Ukrainian liberation movement were killed.”

Mr. Koledov emphasized that, “The events of the past seven years have added to the pantheon of Ukrainian heroes, the ‘Heavenly Hundred,’ as well as the military and volunteers who defended the sovereignty and territorial integrity of Ukraine in the continued struggle with the Russian Federation. Additionally, the heroes are replenished daily…the heroes are also those who assist the military, financially and materially; volunteers, medical personnel and those who have taken a fighting position in media outlets and the internet against the Russian occupiers of Eastern Ukraine.”

Andriy Futey, president of the UCCA, said that, “The heroes that we honor today knew that Russia will never leave Ukraine alone. When we properly honor the memory of those who died in the struggle for independence, it is very important for all of us to speak with one voice. We are the body that can tell the world that Russia’s aggression is a threat not only to Ukraine, but also to the entire free, democratic world.”

The event included an artistic program prepared by Svitlana Polak and Vita Polak, directors of the studio “Elegia.” Ksenya Levkovych performed the song “Ти повертай лелеко мій” (Return My Stork), while Solomia Khudyk performed “Життям заплачу” (I Will Pay With My Life).

“Pomarancheva Khvylia” was established in 2008 by Yuriy Melnyk, Halyna Boryslavska, Taras Vasylyk and Yaroslav Zahaiskyy. The organization strives to include and engage with newcomers from Ukraine to actively participate in the Ukrainian community of Chicago.