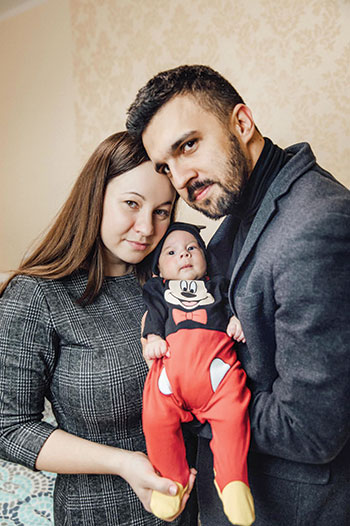 NEW YORK – Imagine watching your baby struggle with each passing day to breathe and swallow food. Imagine knowing that your baby’s last breath is not far away, all while knowing that children afflicted with the same terminal genetic disorder can access a treatment that halts the illness, allowing them to not only live, but develop normally.

This is the situation in which Ukrainians Mariia and Vitaliy Svichynsky find themselves. Their baby, Dmytro, is running out of time to receive a cutting-edge, though extremely expensive, medication that can treat his condition.

Dmytro Svichynsky, now five-months-old, was born with Type 1 Spinal Muscular Atrophy (SMA), a variant of the disease that targets the body’s motor neuron cells, leaving them weaker by the day until they eventually stop working. Ultimately, these cells lose all function and die, making essential activities like breathing, eating and moving increasingly difficult. Eventually they become impossible and the child cannot survive.
For the Svichynsky family there is reason for hope, though that hope comes with a staggering price tag of $2.3 million for a single life-saving dose of a cutting-edge gene therapy medication. Known commercially as Zolgensma, the medication is approved by the U.S. Food and Drug Administration (FDA) for use in children under age 2 in the United States. In all of the countries where Zolgensma is approved for use, the government negotiates the price and largely covers the cost.

While it is available in Canada, South Korea, Argentina and much of Europe, it is not approved for use in Ukraine – the country has not even started the approval process. If there is any hope for the Svichyn­skys that Zolgensma can be used to treat their son Dmytro, they must raise $2.3 million to cover the full cost of the treatment, which is among the most expensive medications on the planet.

With this daunting task ahead of them, the Svichynskys, together with the organizations Razom for Ukraine, the Ukrainian American Business and Professionals Association and the ad hoc group Save Dmytro North America, held a marathon fundraiser live on Facebook on April 10 to raise the necessary funds.

Multiple experts took part in the event, providing information about the illness, its treatment, and why Ukrainians need to overcome great hurdles to obtain it.
Dr. Dmytro Morderer, a researcher at the Mayo Clinic who studies neurodegenerative disorders, said the disease is a rare condition that causes the deterioration of motor neurons in the spinal cord. These neurons supply nerves to skeletal muscles and stimulate muscle contraction. As these muscles deteriorate – for example, the muscles in the diaphragm used for breathing – the patient’s body is unable to perform even the most basic functions needed to survive. Most children afflicted with Type 1 SMA don’t live past age 2.

There are three treatments available for patients with SMA. Two, Spinraza and Evrysdi, are supportive therapy treatments that have to be administered throughout a patient’s life, while Zolgensma is a one-time infusion given intravenously.

Approved by the FDA, the medication has been administered to 700 children worldwide. Novartis says that children treated with the medication are able to sit by themselves, to crawl and even walk independently.

In order for the medication to have its greatest impact on Dmytryk, he must receive the treatment before he turns six months old.

Speaking during the Facebook fundraiser, Volodymyr Zhovnir, director of Ohmadyt Specialized Children’s Hospital in Kyiv, said his hospital is equipped with a highly trained multi-disciplinary staff to administer Zolgensma and perform the required follow-up treatment.

What remains for the Svichynsky family is to raise the money needed to save their child’s life. The boy’s father, Vitaliy Svichyn­sky, is no stranger to seemingly insurmountable obstacles. He is widely regarded in Ukraine as the man who fought to save Odesa from Russian occupation.

Christian Caryl, an opinion editor at The Washington Post, wrote about Mr. Svichyn­sky’s activism in a story titled “The Self-Defense of Odesa” that appeared in the April 16, 2014, issue of Foreign Policy magazine (see https://foreignpolicy.com/ 2014/04/16/the-self-defense-of-odessa/).

As volunteer soldiers began defending Donbas against the “little green men” in 2014, so, too, did Vitaliy begin defending Odesa against Russian-led provocateurs who vowed to create a new republic of Odesa.

Mr. Svichynsky organized and led an Odesa self-defense battalion of 150 students and former military personnel. A brilliant strategist, Mr. Svichynsky and his battalion devised plans to defend critical sites in the city.

Activists such as Mr. Svichynsky understood that they were on their own to defend Odesa. Their efforts were buoyed by the motto of Euro-Maidan: “Each person is but a drop; together we are an ocean.”

As Mr. Svichynsky and his wife engage in the fight to save their son’s life, the family is using the same motto. They are asking for a small drop from many people in the hopes that they can raise the staggering amount needed to pay for their child’s life-saving medication. They are asking for the price of a cup of coffee.

Over the past two months, the family has raised more than 55 percent of the funds needed for Zolgensma.

He has baked cookies and sold them to soccer players. He has walked the streets of his home town Odesa and asked for people’s time, skills and talents that can be auctioned off – a manicure, a class in marketing, lunch with an actress, a poet’s recitation, a meeting with a rock star.

Mr. Svichynsky has asked bars and shops to donate a day’s earnings. He has asked friends from afar to offer a stay in their hotel in Bali. Ukrainians from the band Dakha Brakha, as well as famed musician Svyatoslav Vakarchuk, writer Serhiy Zhadan, and the filmmaker and political prisoner Oleg Sentsov have donated their support.

The cause has grown for Mr. Svichynsky, who wants to help all children with SMA and other rare illnesses. He is advocating for changes to Ukraine’s healthcare laws to allow for faster negotiations in contracting new medicines.

Mr. Svichynsky said the cause is much greater than saving his son’s life. He believes the work will help improve healthcare throughout Ukraine.

Dr. Olya Yarychkivska, a geneticist at Rockefeller University, agreed that Ukraine needs to adopt a systemic approach to the problem of treating children with rare genetic disorders.

“When I joined Dmytryk’s fundraising team, I saw how parents of SMA children were raising money on their own and quickly realized that the SMA problem has to be solved on a state level.”

Meanwhile, Ms. Yarychkivska has joined Mr. Svichyns­ky’s new advocacy campaign, Life for SMA Kids, which aims to address the SMA problem in Ukraine. She has been so profoundly impacted by Mr. Svichynsky’s spirit of volunteerism, patriotism and leadership that she believes he will one day head the country.

“Mark my words, Vitaliy Svichynsky will be president of Ukraine one day,” Ms. Yarychkivska said.