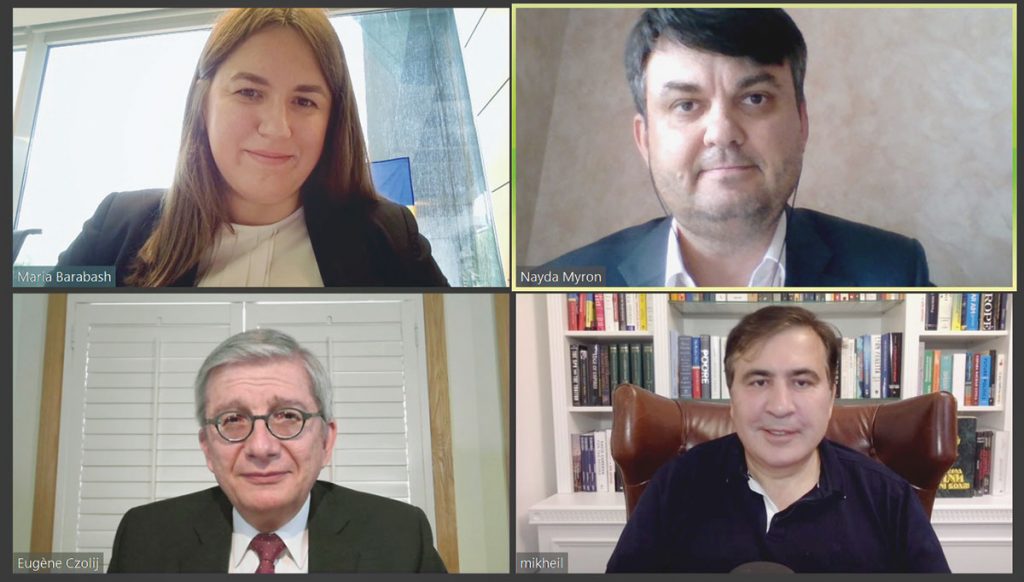 KYIV – Ukraine-2050 President Eugene Czolij met virtually on May 31 with Mikheil Saakashvilli, the head of the Reforms Executive Committee of the National Reforms Council of Ukraine and the third president of Georgia, to discuss the need for concrete reforms in Ukraine and future cooperation on the issue.

The meeting took place at the request of the Office of the President of Ukraine for the Executive Committee of Reforms to review and respond to an appeal made by Ukraine-2050 to President Volodymyr Zelenskyy on the need for urgent reforms to attract investments to Ukraine.

During the meeting, Mr. Saakashvilli presented the composition and work of the National Reforms Council headed by Mr. Zelenskyy, as well as the Reforms Executive Committee and the non-governmental organization “Office of Simple Solutions and Results” that he heads personally. The experts at this non-profit organization prepare proposals for the president and members of the National Reforms Council of Ukraine.

Mr. Saakashvilli said that proposals were developed to the Customs Code of Ukraine, the Code of Labor Laws of Ukraine and the Privatization Code, as well as on the fight against corruption through the disclosure of corruption schemes. He also said that experts from the Office of Simple Solutions and Results conducted a study and estimated that Ukraine loses more than $37 billion annually to corruption.

Mr. Czolij presented the composition and work of Ukraine-2050, particularly the establishment of a Permanent International Media Monitoring Mission on Disinfor­mation about Ukraine and the Ukrainian diaspora. He also highlighted the need for urgent and tangible reforms to attract investments to Ukraine, starting with judicial reform, as well as for concrete action to significantly reduce the level of corruption in Ukraine.

At the end of the meeting, it was agreed to regularly hold such meetings, mainly to discuss concrete reforms and ways to fight corruption in Ukraine.

Ukraine-2050 is a non-profit organization established to help implement within one generation – by 2050 – strategies for the sustainable development of Ukraine as a fully independent, territorially integral, democratic, reformed and economically competitive European state.