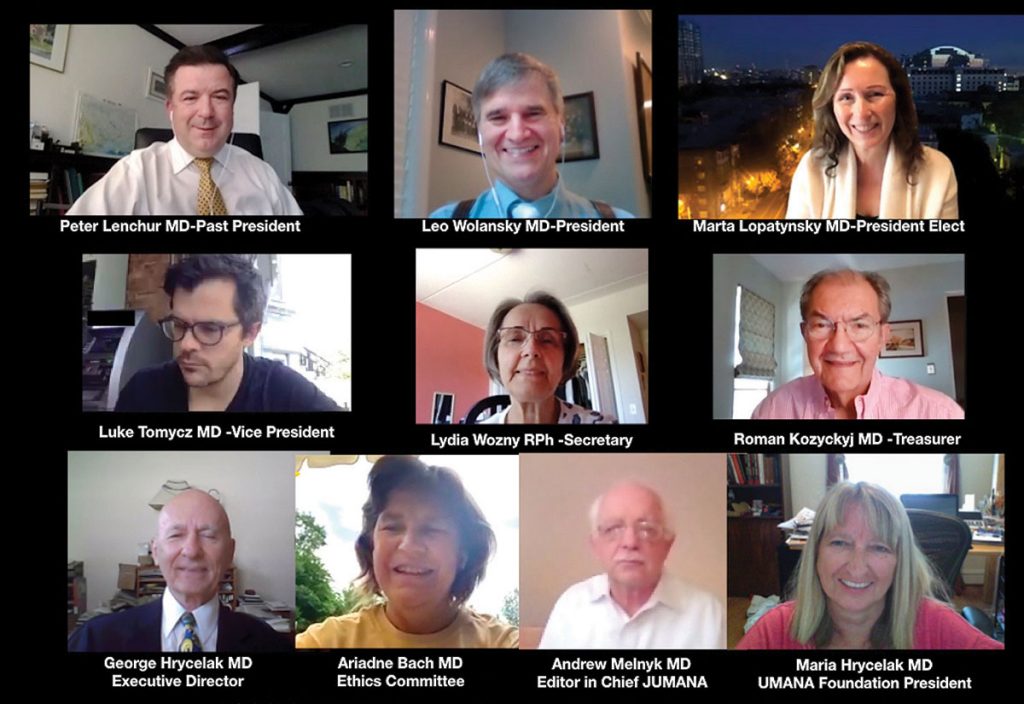 CHICAGO – The Ukrainian Medical Association of North America (UMANA) held its 39th biennial Assembly of Delegates virtually on June 19. Delegates elected Dr. Leo Wolansky president of the organization for the next two years.

Outgoing president Dr. Peter Lenchur welcomed nearly 30 delegates from the various UMANA branches in the virtual meeting, representing the organization’s roster of nearly 500 members. The meeting formally reviewed UMANA activity from 2019 through the current month. Reports by outgoing officers emphasized UMANA’s flexibility in convening face-to-face meetings to virtual venues, allowing continued communication with members and the general public. Unfortunately, the UMANA Scientific Convention, which usually runs concurrently with the Assembly, needed to be rescheduled to 2023 due to COVID-19 pandemic restrictions.

The long-time editor-in-chief of the Journal of the Ukrainian Medical Associa­tion of North America (JUMANA), Dr. Roxolana Horbowyj, after many years of dedicated service, stepped down from her position. Dr. Lenchur thanked Dr. Horbowyj for maintaining the Journal, awarding her a personalized plaque for outstanding achievement. Dr. Lenchur introduced the new editor-in-chief of JUMANA, a long-time member and UMANA past president, Dr. Andrew Melnyk.

The non-profit educational and scientific arm of UMANA, the UMANA Foundation, continues to support CPR and first aid classes for various Ukrainian American youth organizations. Foundation President Dr. Maria Hrycelak reported that 62 medical and dental students have received scholarships since its inception. The foundation continues to provide support for international medical education projects in the U.S. and Ukraine through collaboration with the University of Illinois at Chicago.

The Assembly issued a vote of confidence for the outgoing Board of Directors, and voted in the next slate of officers. In his first official act, Dr. Wolansky awarded Dr. Lenchur a plaque in appreciation of his dedication to UMANA. In his acceptance speech, Dr. Wolansky welcomed new and especially younger members in health care professions to join UMANA, and proposed using expanded social media to attract and maintain relations with younger generations. He thanked the Assembly for electing the new Board of Directors, and promised to work hard at developing new venues to share medical knowledge among Ukrainians worldwide.