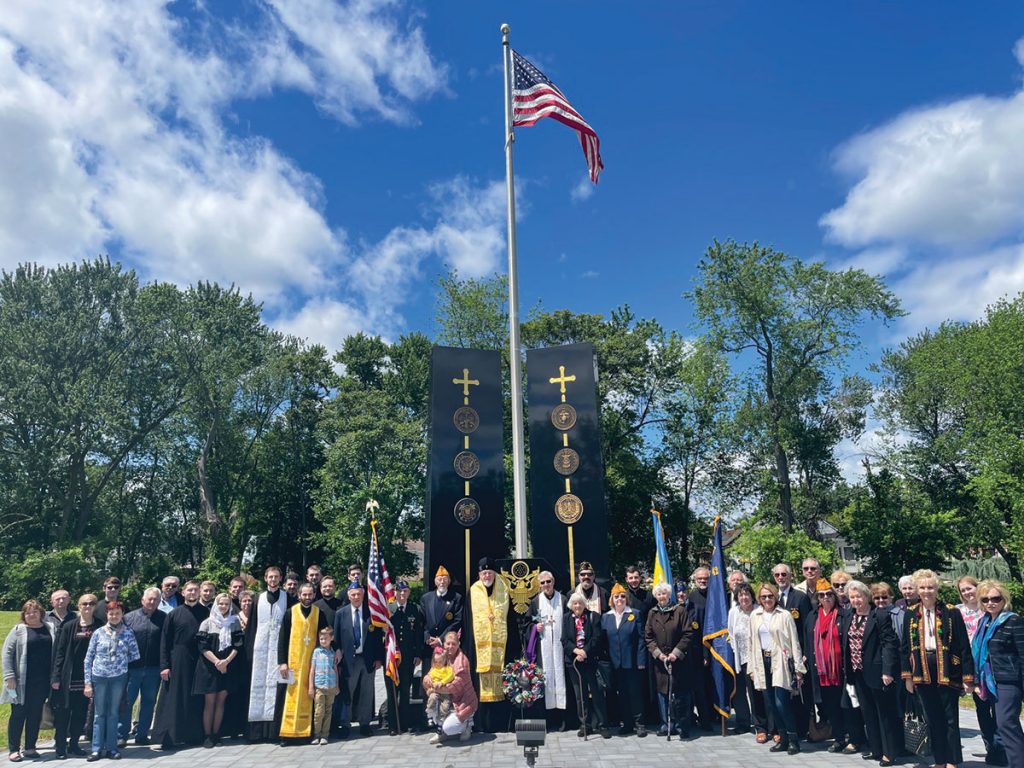 SOUTH BOUND BROOK, N.J. – Members of the Ukrainian American Veterans (UAV) from locations in the Mid-Atlantic states gathered on Memorial Day, May 31, with dozens of supporters at the Ukrainian American Veterans National Monument, located in front of St. Andrew Memorial Church, to honor the memory of American soldiers of Ukrainian descent who died during their military service throughout the history of the United States of America.

Metropolitan Antony spoke prior to the memorial service, saying that, “The men and women we remember today are worthy of our prayers and the honor we exhibit for them this day. I watched the Memorial Day Ceremony at Arlington National Cemetery in Washington, D.C., this morning and I share President Joseph Biden’s statement concerning our nation’s heroes. He said ‘We honor these, the best of our dedicated men and women of our Armed Forces because they first honored our nation and they honored us as the beneficiaries of their sacrifice.’”

“The majority of the sacrifices of our heroes were realized in distant lands and under extremely hostile circumstances with the clear understanding that their battle far from their loved ones was necessary to ensure continued life, liberty and freedom for their children and grandchildren and for all of us who gather here today,” Metropolitan Antony said.

He also expressed gratitude to the veterans present at the memorial service and the dozens of other patriotic individuals who attended the event. The Metropolitan remembered those who served in the various state National Guards, which all too often are called up to serve alongside the other branches of the Armed Forces during times of war.

Following the memorial service, Matthew Koziak, a veteran and chairman of the UAV Memorial Committee, spoke about the more than 200,000 Americans of Ukrainian descent who have served in the U.S. Armed Forces.

“Most were born in the U.S.A., but many were immigrants who came to the U.S.A. having experienced difficult lives in Ukraine in search of freedom and were determined to prevent America from falling into the control of the godless regimes that have destroyed millions of lives throughout the world. American soldiers of Ukrainian descent understood how important their service was.”

The UAV National Monument had a new appearance for this year’s Memorial Day commemoration. Metropolitan Antony gave a blessing for the installation of paver stones leading from Metropolitan Mstyslav Drive (the roadway that leads from Easton Avenue to St. Andrew Memorial Church) all the way up to and surrounding the monument itself. The work was completed just weeks earlier and will be further enhanced with landscaping and benches for people to sit on as they ponder the sacrifice of brothers and sisters on duty and the thousands of veterans still living who have served in the military.

The UAV National Monument was blessed and dedicated in October 2015 to commemorate both the living and deceased Ukrainian American soldiers, sailors, airmen and Marines with over 250 veterans and family members participating. It was a long-time dream of the UAV. Mr. Koziak urged all veterans of Ukrainian descent to join the UAV and called upon those present to encourage their family members to do so. He further urged family members of deceased veterans to register them with the UAV for historical purposes. Closing remarks were made by UAV National Commander Anna Krawczuk, who expressed gratitude to everyone present for their participation in honoring those who made the ultimate sacrifice. The next service scheduled before the monument is for Veterans Day, November 11, to honor all living veterans and those who reposed through the years by natural death.