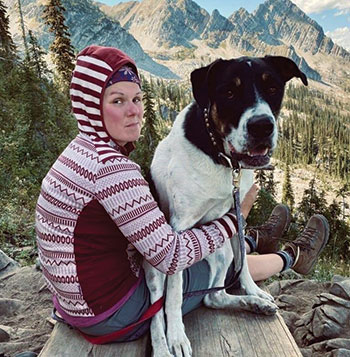 KYIV – On July 3, Ustia Stefanchuk, a Ukrainian blogger and journalist now living in Canada, wrote a post about the atrocities of the Soviet government in Lviv. Her post described how the Soviet authorities tortured her family. On July 5, Facebook deleted Ms. Stefanchuk’s account. She reported the news from a different account.

Facebook said that the violation of the social network’s standards was the reason for the move. Ms. Stefanchuk called it an example of the destruction of the national consciousness of Ukrainians.

A writer originally from Lviv who currently lives in Canada, Ms. Stefanchuk researches the life of the first wave of Ukrainian immigrants to Canada. She also searches for and writes about abandoned Ukrainian churches.

In her post for which the social network deleted her account, Ms. Stefanchuk wrote about the day the Soviet army retreated from Lviv under pressure from Germany. As they fled on July 3, 1941, Soviet troops killed thousands of Ukrainians, including those imprisoned as counter-revolutionary elements, Ms. Stefanchuk wrote, adding that they included intellectuals, teachers and students. She wrote that the Soviets shot people and threw grenades into the cells, and the advancing Germans then opened Lviv prisons and let residents recognize their relatives.

In a photo attached to the post, Ms. Stefanchuk explained that a young woman from Lviv, wearing an embroidered dress, was clearly horrified by her surroundings. She had just seen hundreds of half-decomposed corpses. Others from the city were in the midst of trying to find their relatives among the dead. She notes also that, due to a lack of time and fear of the oncoming German army, the Soviets piled dozens of dead bodies in prison cells.

“Another photo included with the post showed a girl in uniform in an NKVD prison after the escape. This is a well-known photo,” Ms. Stefanchuk wrote in Ukrainian. A Facebook user recognized her own mother in the picture and noted it in the comments.
The post received 1,000 likes, 120 comments and 424 shares.

“At some point, I received a message from a friend asking why he couldn’t see my page and post,” Ms. Stefanchuk said. “I was a little taken aback and went to see what was going on. First Facebook sent me a standard text about a 30-day ban because of this post, which violates, it turns out, community standards. After that, I received a notification that my account has been blocked without the right to renew it.”

Ms. Stefanchuk also received a letter by e-mail stating that the page had been permanently blocked. She said that she has been blocked before for similar posts about the history of Ukraine. However, the block was lifted the past two times as soon as she wrote to Facebook support staff. She said that they even apologized.

The account was initially blocked “without the right to appeal,” according to the letter she received, and without giving Ms. Stefanchuk the ability to regain content that is her intellectual property.

“I was unlocked! I can’t believe it! My account exists again after ‘closing without the right to restore,’” Ms. Stefanchuk wrote on her Facebook page.

She is still trying to understand why she was initially banned and why Facebook ultimately restored her page, but her first concern was to secure all of her data that she previously posted on the site.

“I’m copying all the data now because who knows what can happen next,” she wrote after her account was renewed.

“Gigabytes of information, all photo archives, including precious photos of abandoned churches in Canada, all my notes, all contacts,” she said about the data she had posted to the site.

“The messenger, of course, was also deleted, with all the correspondence with people and information that is important to me. And all because of Ukrainian history, told through the prism of my grandmother. I am terribly hurt and sad,” Ms. Stefanchuk wrote before her account was reinstated. “Most of all, [I am hurt and sad because] there is no influence on it, that Ukrainians are again everywhere censored and disenfranchised.”

After she found out that her account was reinstated, she thanked her followers for their support, which she believes helped bring Facebook’s attention to the issue.

Meanwhile, Volodymyr Viatrovych, a national deputy in the Ukrainian parliament and an ex-chairman of the Ukrainian Institute of National Memory, clarified that thanks to Ms. Stefan­chuk’s letter and that the comment on her page was made by Lesia Rudavska Kolenska, it was possible to find out that the young Ukrainian woman in the photo was Maria Lys, who was 20 when the picture was taken, according to Mr. Viatrovych.

Ms. Lys was studying in Lviv to be an accountant before the Bolsheviks came in 1939. Under the Soviets, she studied typing and began working as a typist. On the morning of June 30, 1941, she learned that the Soviets had fled and, at the same time, that thousands of prisoners had been killed in prisons. Ms. Lys, along with others, tried to find among the dead relatives or friends who had previously been taken by the Soviets.

“I have recorded memories of my grandmother Irena, at that time a 16-year-old, who rode a bicycle to search for her closest friend, not yet knowing that she was in one of those mass graves,” Ms. Stefanchuk wrote in a Facebook post. “Recalling those days in early summer, the grandmother kept saying that the heat made it impossible to smell anything but the corpses in several parts of the city, especially on Horodotska Street. Lviv was permeated with horror and crazy cries of parents, mothers, people who found the mutilated bodies of their relatives, and a disgusting whiff of death.”

“My grandmother’s friend was identified a few days later by her father,” Ms. Stefan­chuk wrote. “He saw her braids and clothes, everything that could be found among the mountains of half-decomposed bodies. My husband’s mother’s aunt was found among the others killed. [She was found] only by a bloody picture in her pocket. Such stories exist in almost every family in western Ukraine, from Zolochiv to Buchach, from Stanislavіv to Lutsk,” Ms. Stefanchuk wrote in the post that lead to her page being removed.

Ms. Stefanchuk said she wrote her post to discuss taboo topics of Ukrainian history. She also wrote about the SS Galicia Division division, adding that the people of Lviv joined the German divisions because they believed that there could be nothing worse than the Soviet military. The following day her page was blocked.