During U.S. trip, Zelenskyy and Ukrainian delegation met with leadership of Apple, Google 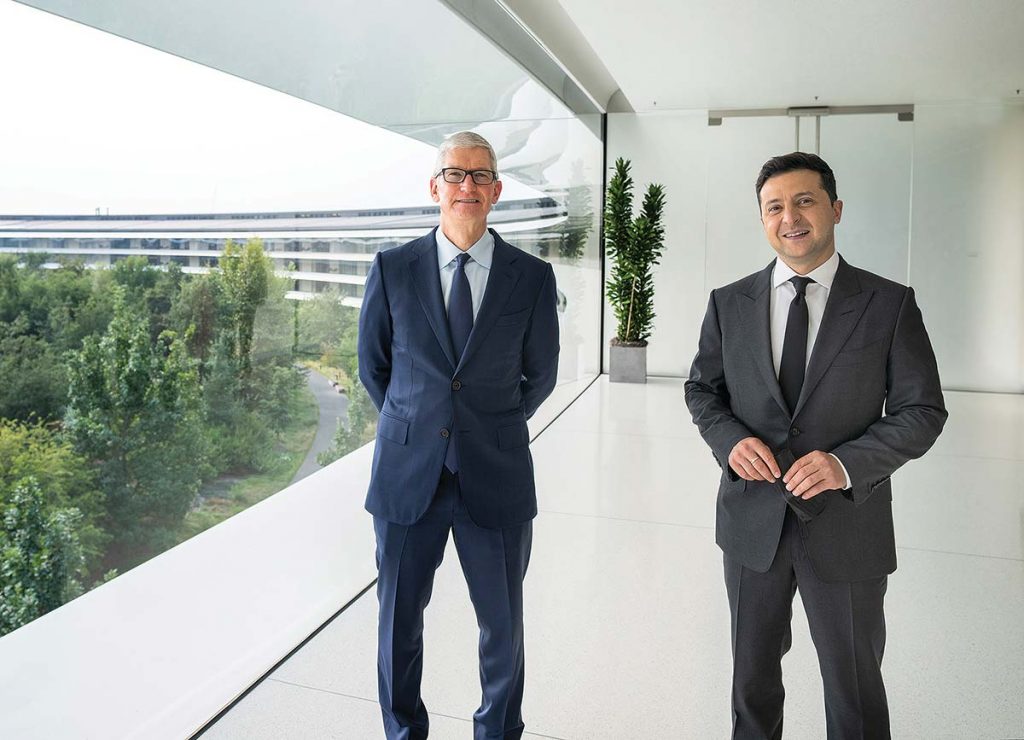 LVIV – During his trip to the United States, Ukrainian President Volodymyr Zelenskyy visited Apple headquarters in Cupertino, Calif., on September 2 where he met with the company’s chief executive officer, Tim Cook, according to the office of the Ukrainian president.

Messrs. Zelenskyy and Cook discussed having Apple products in Ukraine, the opening of an Apple store in Kyiv, as well as hosting the company’s new massive database in Ukraine.

Mr. Zelenskyy noted that the success of Apple, which has worked its way up from a garage startup to the most valuable corporation in the world, inspires those who are changing the digital industry today. Mr. Zelenskyy stressed that the Ukrainian IT sector is now developing rapidly. The official opening of Apple’s office in Ukraine is additional evidence of the prospects of the Ukrainian market, Mr. Zelenskyy said.

“Today, Ukraine is already a powerful global IT hub. Our specialists successfully cooperate with Fortune 500 companies, including Apple,” the Ukrainian president said.

Mr. Zelenskyy told Mr. Cook about Ukraine’s achievements in the IT sphere and expressed interest in further expanding Apple’s presence in Ukraine, particularly through online support teams, Apple Music and AppStore moderators, as well as by providing device maintenance services.

“I congratulate you on your tremendous progress toward digital transformation,” Mr. Cook said at the beginning of his meeting with Mr. Zelenskyy.

Mr. Zelenskyy and other members of his team discussed Ukrainian digital projects with the Apple chief executive. The two also talked about the census project, which Apple has successfully implemented in the United States, and the possibility of cooperation in implementing a similar task in Ukraine.

Additionally, the two men also discussed the possibility of cooperation in the field of programming education for school children, students, veterans, health care workers, as well as the provision of computer equipment to schools and teachers in support of similar programs already being implemented in Ukraine.

Messrs. Zelenskyy and Cook also discussed the possibility of Apple building a data center for iCloud services in Ukraine, following the example of a similar center that was built in Denmark. They also touched upon the need to localize Apple products for Ukrainian language speakers, including Siri, Apple’s personal assistant. There is currently no Ukrainian language in the Siri settings.

“I hope that the dynamics of Apple’s development and the pace of digitization of our country will help create a success story of Apple in Ukraine and Apple with Ukraine,” Mr. Zelenskyy said.

“[Tim Cook was] the man Steve Jobs named as his successor, and he was right,” Mr. Fedorov wrote on his Facebook page after his meeting with Mr. Cook. “The most effective manager in the world.”

According to Mr. Fedorov, Ukraine has already achieved a degree of success with Apple.

Mr. Fedorov added that Ukrainian officials would like to see the tech giant do more in Ukraine.

“Apple has officially opened an office in Ukraine. I want the Apple store to appear in Ukraine and to have Apple’s educational programs in our country,” Mr Fedorov said.

In May 2020, Apple registered its own representative office in Ukraine – a legal entity with a capital share of 2.7 million hryvnias (approximately $100,000).

In March 2021, a Ukrainian section appeared on the company’s website, and on June 28 Apple launched a service to support users in the Ukrainian language. On June 30, the Ministry of Digital Transformation announced that Apple had opened its official office in Ukraine.

During the visit to the United States, Ukraine’s official also met with Google officials in Washington, according to the Ukrainian presidential office.

Mr. Fedorov met with Google Vice President Karan Bhatia, and the pair discussed the algorithm that Google used to select and recommend content for the main page of Ukrainian YouTube Music and YouTube.

“At the moment, our users are offered Russian content, which is unacceptable when there is a war in Ukraine. In order not to repeat such cases, we offered the company to involve independent Ukrainian editors who will select content. This will open up opportunities for the Ukrainian music and creative industry,” Mr. Fedorov said.

The parties also discussed cooperation on the application of “Diia” and the possibility of Ukrainians using the YouTube Shorts fund.

YouTube Shorts is a unique fund of $100 million that is earmarked to support content creators throughout 2021-2022.  The program gives authors of the most popular videos the ability to earn from $100 to $10,000 for their work. As a result, Mr. Fedorov asked Google to add Ukraine to the list of countries that can use YouTube Shorts.

“Ukraine has a very developed creative industry. We have a large number of advertising and marketing agencies. Our directors receive awards for Ukrainian films. Clip makers shoot videos for world stars, such as Coldplay, advertising for companies such as Apple, and are highly valued around the world,” Mr. Fedorov said.

Ukrainian officials also stressed during their meeting with Apple and Google that the Ukrainian government strives to create favorable conditions for the involvement and development of international technology companies in Ukraine.