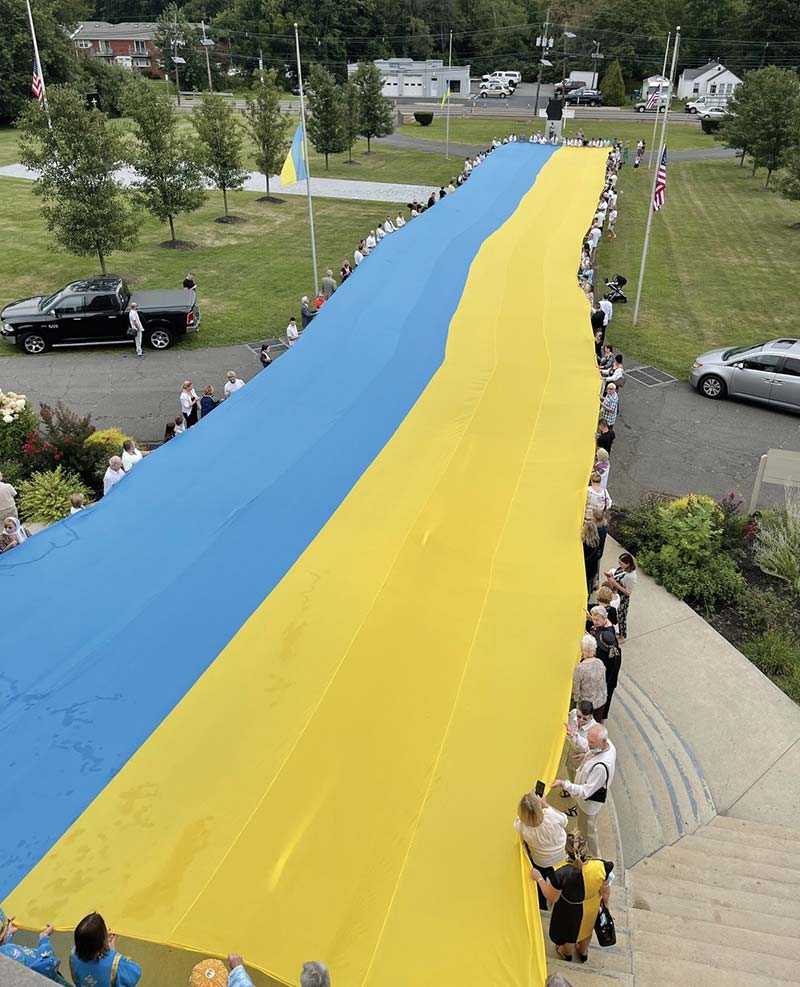 SOUTH BOUND BROOK, N.J. – Hundreds gathered at the Metropolia Center of the Ukrainian Orthodox Church of the U.S.A. (UOC-U.S.A.) on August 29 for a celebration in honor of the 30th anniversary of Ukraine’s renewed independence.

The faithful arrived, many sporting Ukrainian attire, for a hierarchical divine liturgy that was celebrated by Archbishop Daniel, ruling hierarch of the Western Eparchy of the UOC-U.S.A. He earnestly prayed for the abatement of the COVID-19 virus, the recovery of all who have fallen ill and the peaceful repose of those who have succumbed to the illness.

In his sermon, Archbishop Daniel stated that it is easy to doubt, but faith sometimes is difficult. We must put aside our preconceptions; put aside our self-assuredness; put aside our sense of control and put all our faith in God. Instead of focusing on our wants – a larger house, newer phone, prettier clothes; we should be thankful that we have a home, food on the table and clothing to cover our bodies.

A short moleben service was prayed in honor of Ukraine, her people and her independence. As the clouds rolled in, the faithful were grateful for the cooler air as they exited the church and stood at either side of the entry drive. The anticipation could be felt as everyone smiled and look about excitedly.

Standing at the top of the steps was Metropolitan Antony and Archbishop Daniel, who quickly grabbed hold of a wide roll of cloth. This cloth was respectfully held by the hierarchs and clergy at one end as it was slowly unrolled with people running up to grab the sides as the fabric became longer and longer. What an amazing sight as hundreds of people held what turned out to be a 350-foot-long Ukrainian flag!

As the adults laughed with joy, the youngsters ran beneath it and played in the blue and gold light glowing through the flag. Having sung “The Prayer for Ukraine” (Боже Великий Єдиний), the public burst out in a loud and heartfelt rendition of the Ukrainian national anthem, as the flag gently swayed and rippled in their hands.

Leaving Metropolitan Antony holding the top of the flag, Archbishop Daniel made his way down and around the large banner, blessing it and the faithful who so proudly held it high. Everyone laughed as they were sprinkled with holy water, and in turn they raised the flag even higher.

Thus, the afternoon festivities began. As the supersized flag was rolled up, the faithful began to make their way to the various areas set up along the perimeter of the church grounds. Having fasted before coming to church, everyone got in line at the Pokrova Sisterhood Hall to enjoy a delicious meal. The ladies had prepared and prepackaged a few options, along with desserts, which they and many volunteers had baked and packaged for safe distribution.

As everyone enjoyed their lunch, sitting at tables set beneath the broad green limbs of the trees, chit-chatting with old friends, and getting to know new ones, the microphone on the stage squawked. Everyone’s eyes turned toward the stage to see if the program was beginning. The master of ceremonies on this day was newly ordained Rev. Mykola Zomchak, a graduate of the St. Sophia Ukrainian Orthodox Theological Seminary.

Fr. Zomchak welcomed everyone to the festivities, warmly greeting Metropolitan Antony and Archbishop Daniel, the visiting clergy, their families, the parishioners and all the guests who had arrived from near and far.

Before starting the entertainment portion of the program, the emcee first introduced the Consul General of Ukraine in New York, Oleksii Holubov, who gave a few words thanking the people of Ukrainian heritage in the diaspora for their continued support of their ancestral homeland.

Jaroslav Koshelevskyi, director of the Ukrainian National Federal Credit Union, handed Archbishop Daniel a check for $100,000 to be used toward the completion of the UOC-U.S.A.’s Ukrainian History and Education Center, while Financial Director Zenko Halkowych handed the president of the Pokrova Sisterhood a generous donation.

As the adults were entertained by the singers, the children were kept busy under the Ukrainian History and Education Center’s (UHEC) “Crafts for Kids” tent, where they rolled up their sleeves and lost themselves creating various Independence Day themed crafts.  Biting their lips and frowning, they painstakingly worked on crossword puzzles, practiced finding Ukrainian words and decorated Tryzubs (Tridents).

As the formal program concluded, everyone got up and mingled with the performers and then branched out to the various booths, while others dallied and danced to the Ukrainian tunes that were being broadcast from the loudspeakers.

Olena Halkowych announced the bakery raffle, as everyone paused to check their ticket numbers. The Sisterhood was auctioning off a scrumptious tray of lovingly baked desserts as a fundraiser for its efforts.

People were queuing for a turn to take home a photographic souvenir. A replica Ukrainian House sponsored by UHEC, complete with props – Ukrainian embroidered shirts, wreaths with long ribbons, scarves, red beads and straw hats – were available for guests to get creative. People giggled as their friends took up poses, peeking out through the house’s blue framed windows. Children took their places sitting upon the hay bales, donning straw hats and colorful scarves, flanked by tall sunflowers swaying in the breeze.