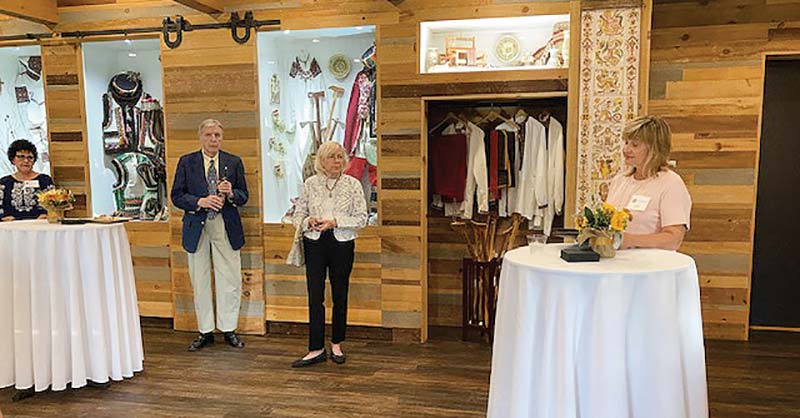 JENKINTOWN, Pa. – The Board of Directors of the Ukrainian Educational and Cultural Center (UECC) hosted a preview showing of its newly renovated space, formally known as the Clubroom, which from now on will be known as the Cheremosh Room.

Eleven organizations and 47 individuals were invited to a sneak peek of the room prior to its opening to the general public.  The invitees were a select group of top UECC donors, each having gifted the Center at least $10,000 since its inception in 1980.

UECC Board President Natalka Panczak Firko opened the preview showing on August 20 by thanking the guests for their selflessness and generous financial support of the UECC. The organization’s largest expense is its building operations.  Ms. Firko noted that the Center’s two largest sources of income are from rentals and donations.  She went on to explain that the Board has focused much of its work on the UECC Five Year Strategic Plan.

“Our belief is that we need to be goal minded in order to keep on top of projects, projects that are important for our community to be able to utilize this space for their needs,” Ms. Firko said.

Among the guests at the preview event were representatives from one of the UECC’s bigger donors, the Cheremosh Hutsul Society of Philadelphia.

Cheremosh began working with the Center a few years ago to help realize a vision. Understanding that the Clubroom was an integral part of the Center in terms of how much it is used, and knowing it was in need of a facelift, the Cheremosh Society sponsored the renovation project, giving $80,000 for the room’s transformation.

Mykhailo Luciw, president of the Cheremosh Hutsul Society of Philadelphia, addressed the attendees at the preview event and gave them a brief overview of the Society’s history and work in the community.  He said he was pleased that he and his board had been given the opportunity to share the Hutsul heritage with the Ukrainian community through the exhibits that are now on display in the new Cheremosh Room, which is accessible to all.

Larissa Kebuz, UECC Board and Strategic Planning Committee member, presented the vision and goals outlined in the UECC’s Strategic Plan. She reminded everyone that the plan was developed before the COVID-19 pandemic.  Ms. Kebuz noted that the Board is still committed to implementing the organization’s strategic plan, despite the difficult circumstances posed by the ongoing pandemic.

The following items from the organization’s strategic plan have been completed: renovation of the Clubroom, repaving of the parking lot and formation of the Executive Director Search Committee.  Currently, the UECC office is being renovated and the Wi-Fi system is being reviewed in preparation for an overhaul. Most of the accomplishments have been centered on capital improvements, and a special thank you was expressed by the organization to the Center’s top donor, the Ukrainian Selfreliance Federal Credit Union, which regularly allocates funds to UECC capital improvement projects. At the UECC’s last Annual Membership Meeting, the credit union pledged $100,000 over the next three years.

Wrapping up the night, Zenia Brozyna, a UECC Board member who is on the Executive Committee and serves as one of the Board’s vice presidents overseeing the Program Committee, went through the extensive list of upcoming events at the UECC this fall. She encouraged everyone to participate in some or all of the ogranization’s upcoming events.

Guests stayed for several hours.  They enjoyed each other’s company and viewed Hutsul artifacts while snacking on hors d’oeuvres and partaking in complimentary beverages.

The UECC will open its doors for programs and visitors with events planned after Labor Day, and officials from the organization said they will do so while striving to maintain a safe environment for everyone.  The administration will abide by the recommendations of the Centers for Disease Control, as well as Pennsylvania and Montgomery County pandemic guidelines.  The public is invited to visit on October 2 for the UECC’s Cheremosh Room open house (noon-3 p.m.).

Donations to the Ukrainian Educational and Cultural Center are always welcome and are tax deductible. Donations can be made at any time by contacting the UECC office at 215-663-1166, or by visiting the website at www.ueccphila.org.