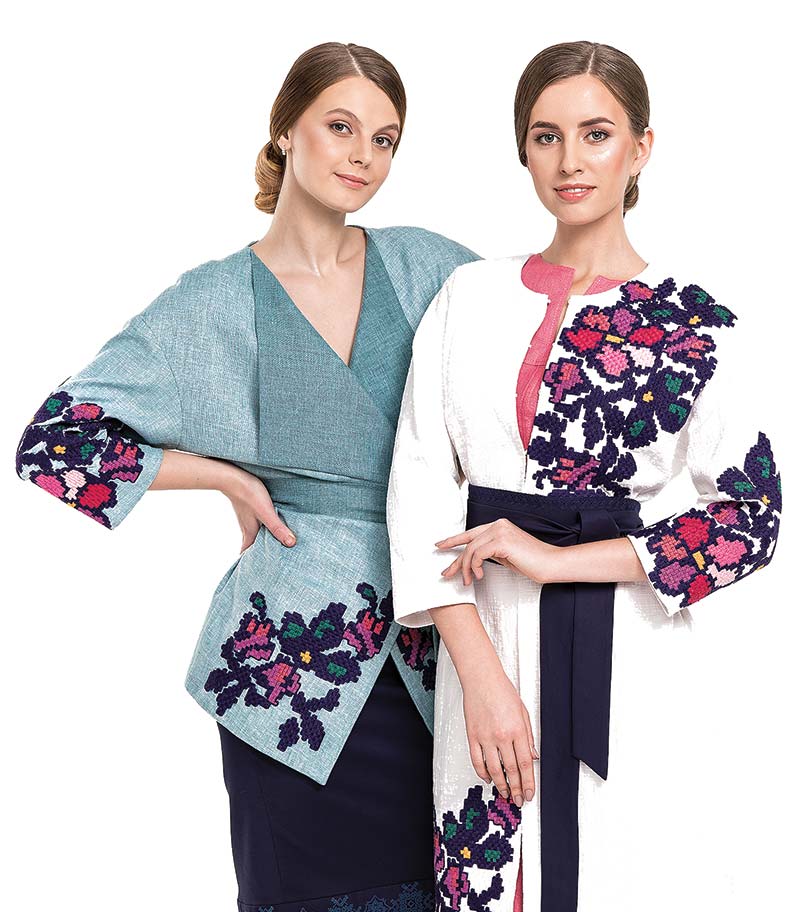 VLADIMIR ANUFRIEV imagemade@gmail.com
Oksana Polonets designs modern clothing in a national style, from casual to bridal, and each creation is a unique mix of comfort and beauty.

LIVINGSTON, N.J. – The Ukrainian National Women’s League of America (UNWLA) was founded more than 95 years ago with a mission that includes promoting “the preservation of Ukrainian national identity, cultural heritage and ethnic traditions in the United States,” according to the organization’s website. In keeping with this goal, the organization will hold a Ukrainian Fashion Show at the Ukrainian National Home in New York on September 10 and the Montclair Art Museum in Montclair, N.J., on September 12.

The event, a fundraiser organized by members of UNWLA Branch 137, will feature the works of Roksolana Bogutska and Oksana Polonets, both of whom are prominent, award-winning designers in Ukraine.

Modern Ukrainian fashion has not only gained acceptance throughout Europe, but it is now also gaining greater attention in North America as well. With many incredibly talented, creative fashion designers in Ukraine, the country is producing high quality clothing, and most importantly, clothing featuring Ukrainian designs.

“New technologies, fabrics or tailoring – all this in the world has long been done or is being done better than in Ukraine,” said Ms. Bogutska.

“But we can surprise the world with the most valuable thing we have – our culture. We surprise them with collections using our traditions – that’s how they discover Ukraine,” said Ms. Bogutska, a designer and owner of a clothing brand of the same name. She is also responsible for many collections of women’s prêt-a-porter (ready-to-wear) clothing.

Ms. Bogutska, a winner of the 2006 All-Ukrainian Prize “Woman of the Third Millennium,” was also on Fashion Insider magazine’s list of the 12 best spring/summer collections in 2010. She was invited as a special guest of the 28th international Golden Thread competition.  She took part in Vancouver Fashion Week in Canada, Latino Fashion Week in Chicago, the Runway Fashion Show in Dubai, Ukrainian Fashion Week in Chicago, and she presented her collections in New York at the Ukrainian Institute of America at the invitation of Ukraine’s Ambassador to the United Nations and in Washington with the support of the Ukrainian Embassy.

Ms. Bogutska’s brand is a combination of elegant luxury and bold modernity, a unique mixture of Ukrainian ethnic motives and progressive fashion tendencies. It has impeccable quality, the newest finishing technologies and the perfect cut for each model. It is the style of a woman with a strong character, exquisite, provocative and self-confident at the same time.

Ms. Polonets is a designer and owner of a brand of exclusively embroidered clothes with over 16 years of experience in the global fashion market. She has displayed her collections in more than 20 countries, including Canada, the United States, Germany, Austria, Greece, Turkey, the United Arab Emirates, Thailand, Malaysia, Singapore, Switzerland, among others. Her work can be found at branch locations in Kyiv, Lviv, Chicago and Singapore.

Ms. Polonets won design acclaim first in the Autograph fashion competition and received the Golden Quality Mark in 2006. Her dresses were worn on the red carpet at the Oscar ceremony in Los Angeles in 2016, and her brand was awarded the Golden Mark of Quality of National Goods and Services in 2017.

Among her customers are former Ukrainian first lady Maryna Poroshenko, singers Katya Buzhynska, Oksana Pekun, Natalia Valevska, Anzhelika Rudnytska, and actress Olga Sumska. Her design studio also stitched the dresses for the winner of the Queen of Ukraine beauty contest. That winner went on to represent Ukraine in an international competition in 2007.  She has also designed clothing for the debutantes of the Vienna Ball in 2020.

Ms. Polonets designs modern clothing in a national style, from casual to bridal, and each creation is a unique mix of comfort and beauty. Stylish geometric and colorful floral ornaments decorating every designer dress are delicately embroidered with natural yarns and are gently combined with fragile and delicate fabrics, such as voile, organza, silk and satin.

Prêt-a-porter clothing provides the public with high-end clothing made in small quantities to guarantee exclusivity of the purchased outfit. Today this style borders on art and readers are invited to attend the Ukrainian Fashion Show, which is a fundraiser, a celebration of beauty and art, and a venue where readers can view and buy wonderful and unique products from talented and successful Ukrainian designers.

All of the proceeds from this year’s fashion show will go toward the UNWLA’s existing cultural, educational and humanitarian projects, including Dzherelo Children’s Rehabilitation Center and the UNWLA Scholarship program to support disadvantaged students.  These fundraising efforts help bring joy to the lives of children with disabilities, children from poor families and kids in Ukraine who are most in need of joy.

For more about this year’s fashion show, including information about the designers and tickets, readers can visit the following web site: https://www.eventbrite.com/e/ukrainian-fashion-show-roksolana-bogutska-oksana-polonets-fundraiser-tickets-164426579325.