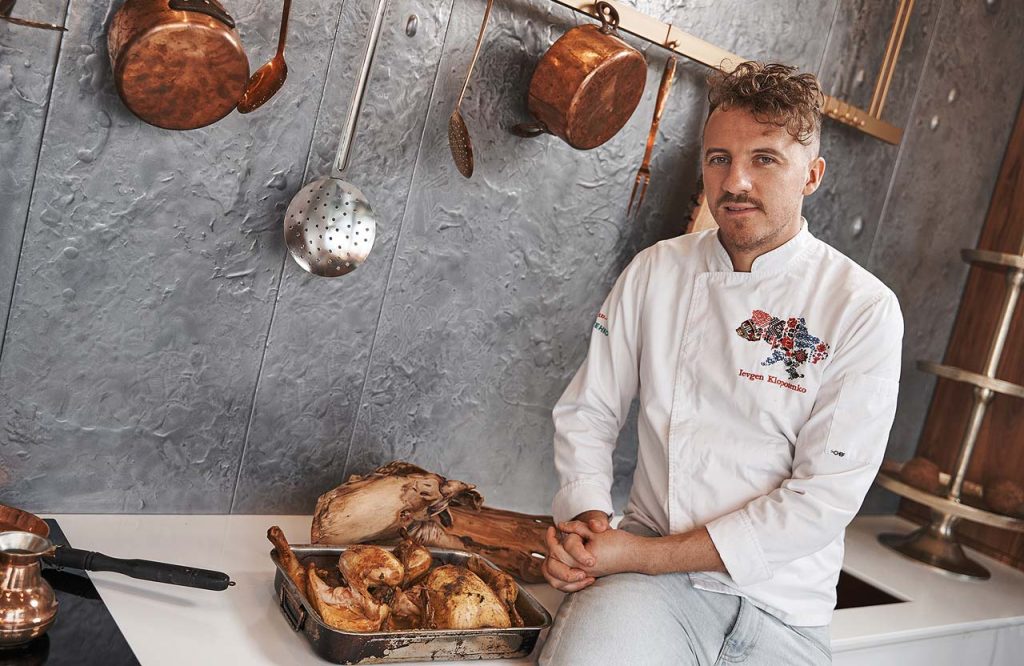 KYIV – Ukraine’s unofficial ambassador of borshch – the hearty, savory beetroot soup – Yevhen Klopotenko, has published an English-language cookbook of 70 recipes – some well-known dishes and some that he resurrected from obscurity – as he continues blazing a path to elevate his country’s cuisine to worldwide prominence.

The Kyiv-born chef released the 172-page book this month based on his journeys throughout Ukraine’s diverse regions to discover long-forgotten recipes from the steppes of Kherson Oblast in the south to the Carpathian Mountains in the west.

Calling it “my perennial research of Ukrainian culinary history,” Mr. Klopo­ten­ko, 34, described the process as “scientific” and involved cooperation with “historians” as he traversed a land area roughly the size of France or the state of Texas.

Aside from providing illustrative detail for each signature recipe, the intrepid chef says he “reimagined” them in a “modern fashion” while providing the reader with “facts about Ukrainian products and foods – how they were eaten in the earlier days, why they are healthy and the best way to prepare them.”

Speaking to The Ukrainian Weekly from an Aspen Institute seminar on “responsible leadership” at a resort in the Carpathian Mountains, the chef said his goal was to make the book “100 percent about Ukraine.”

He asked rhetorically: “There are so many foodies … in the world looking for new tastes … for new cuisines to explore and cook. Why shouldn’t Ukrainian cuisine be one of them?”

Some of his recipes are inspired by Ukrainian writer Ivan Kotliarevsky’s 18th-century Eneida poem in which the chef found “148 names of dishes,” many of which he had never before heard.

For example, his twist on Shpundra, a pork and beetroot stew that is usually dressed with flour or steamed grated millet and sour cream, takes on a medley of other ingredients.

“It turns out spicy and sharp. You can add spices, depending on your taste, adding, for example, ginger and lemon zest,” as well, he added (https://klopotenko.com/uk/shpundra/).

He noted that during his research he discovered that famed poet and writer Lesia Ukrainka enjoyed making confiture, a variety of fruity jams, or that early-20th century statesman and writer Volodymyr Vynnychenko “stuck to a vegetarian diet.”

When asked if English-language readers can find all the ingredients listed in the book, Mr. Klopotenko admitted that readers in East Asia, including in Australia, may find it difficult to find beetroot.

Regarding kvass, a fermented beverage that is usually made from rye bread or even beetroot, a separate recipe is provided if the beverage cannot be found in stores.

Kvass features as one of the main components for Vereshchaka, fragrant pork ribs baked with a variety of spices that include parsley, oregano and garlic.

Beyond the palate, Mr. Klopotenko said Ukrainian cuisine “is an integral part of national identity and a way of life.” The food and how it’s prepared, and all the ingredients, “reflect the cultural features of our people.”

That strong connection with food and national identity has led Mr. Klopotenko to seek international recognition for borshch, which is eaten year-round and with dozens of varying recipes in existence that call for such ingredients as carp, spicy beef, boar blood or wild mushrooms.

Mr. Klopotenko offers 15 borshch recipes at his Kyiv restaurant, 100 Years Back to Future.

Two years of research and fieldwork culminated in March when his non-profit – the Institute of Culture of Ukraine – headed by Maryna Sobotyuk, submitted an application consisting of more than 700 pages to the United Nations’ Educational, Scientific and Cultural Organization (UNESCO) to have the soup recognized on its Intangible Cultural Heritage list.

Paris-based UNESCO is expected to consider the application next year and the decision will be made in 2023, according to Ms. Sobotyuk. She added that Ukraine’s foreign and culture ministries cooperated on the painstaking endeavor.

Partial motivation for re-discovering the roots of Ukrainian food preparation are Soviet policies that homogenized cuisine in all of the 15 republics for more than 70 years, Mr. Klopotenko said.

“During the Soviet Union, national identity and culture, including cuisine, were deliberately and systematically abolished in order to create ‘a unified Soviet people,’” the chef said.

“Nowadays, Ukrainian cuisine comes 90 percent from the Soviet past and has nothing in common with Ukrainian cuisine,” the chef lamented. “Unfortunately, in Ukraine these recipes were thoroughly hidden, and we face almost 100 years of obliteration and need to revive them.”

Much of the watering down of cuisine in the vast Soviet empire of more than 100 different nationalities stems from the work of Anastas Mikoyan, who was the commissar of food under dictator Joseph Stalin.

In 1939, after traveling abroad, including to the United States and throughout the USSR, the high-level apparatchik published “the propaganda-heavy Book of Tasty and Healthy Food, a standardized cookbook,” the BBC wrote in 2019.

As a result, “the USSR demolished not just Ukrainian cuisine, but traditional Russian too,” Mr. Klopotenko said.

From amateur to chef

Mr. Klopotenko discovered his love of food at an early age, having visited his grandmother in Great Britain and while visiting other countries, including Italy, Germany and the U.S.

He started an amateur cooking competition called Cook Wars, during which diners rated their meals. He started making branded fruit jams and was chosen to participate in season five of the reality show Master Chef in Ukraine in which he emerged victorious in 2015, earning him free instruction at the prestigious French culinary school Le Cordon Bleu the following year.

Besides his haute couture eatery in Kyiv, he collaborates with individuals abroad to popularize Ukrainian cuisine, most notably with chef Dmytro Martsenyuk, the executive chef of the iconic Manhattan Ukrainian restaurant Veselka.

Both met in Kyiv while studying at the Kyiv University of Tourism, Economics, and Law for International Economic Relations. They worked together in April in New York to showcase Ukrainian cuisine, once at the restaurant and then again in September while hosting a “multi-sensory dinner” for two days at the old St. Josaphat’s Mona­stery.

“We combined music, lights and offered usual dishes that reflected both Ukraine and the U.S.,” Mr. Klopotenko said.

Mr. Klopotenko joins culinary pracitioners who have contributed to putting Ukraine on the culinary map. And he is one reason Ukraine made Yonderbound’s global ranking of the 20 best countries in the world for food.

France’s Michelin Guide, the premier critic of high-end restaurants with its three-star rating system based on consistency of taste and presentation, mentioned head chef Yaroslav Artyuk of Kanapa in Kyiv in 2018. The restaurant is known for its daring takes on modern Ukrainian cuisine.

Known abroad as well is Donetsk Oblast native Olena Zhabotynska who runs the “23” chain of restaurants. She spent time in Italy, has more than 14 years of culinary experience and represented her country at the 2017 Fontegro Congress in the wild edible herbs category.

In Odesa, chef Savva Libkin has been showcasing the diverse foods of Bessarabia by running three flagship restaurants. They range from varenyky stuffed with flatfish and parsley, chicken broth with matzoth dumplings, to tzimmes with chicken meatballs and zander and perch broth with stuffed pastry pockets.

Still, “Ukrainian cuisine is poorly researched,” Mr. Klopotenko said. “It has a huge potential to become one of the best cuisines in the world. … It will be accessible and open, … distinctive and exquisite at the same time” in 10 years.

Since 2017, Mr. Klopotenko has worked to make food tastier, healthier and safer at Ukrainian educational institutions, including at school cafeterias. The project is called Cult(ure) Food and has been implemented at 5,000 primary schools across the country. Schools have access to more than 100 recipes for their menus.

Starting in 2020, together with First Lady Olena Zelenska, a working group to revamp the school nutritional system was created. The group includes experts from the Ministry of Health, the Ministry of Education and Science, the Antimonopoly Committee, the State Audit Office, UNICEF experts, as well as Mr. Klopotenko and his colleagues. In January, new sanitary regulations for general secondary education came into force as well as others in line with HACCP, a systematic preventive approach to food safety.

Mr. Klopotenko’s new cookbook is available for 489 hryvnias, or approximately $19, and can be purchased at https://store.klopotenko.com/present/tproduct/287447351-974912180691-the-book-ukrainian-cuisine-in-70-dishes. Orders outside of Ukraine can be arranged via email by writing to merch@klopotenko.com.