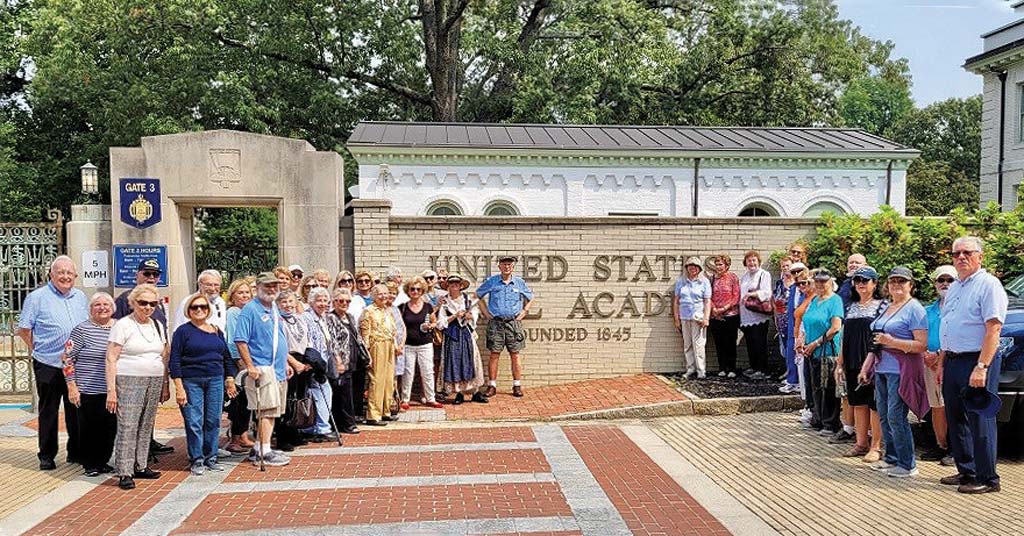 Courtesy of Myroslawa Hill
A contingent of some 40 Ukrainian Americans visited the U.S. Naval Academy in Annapolis, Md., on September 14, where the group learned about the school and its history.

JENKINTOWN, Pa. – A contingent of Philadelphia area “young-at-heart” and vaccinated seniors visited the U.S. Naval Academy in Annapolis, Md., on September 14. For members of the group of roughly 40 people, it was an opportunity to socialize with friends, many of whom had not seen one another since before the COVID-19 pandemic began.

During a walking tour of the Naval Academy, a very knowledgeable guide shared many interesting facts about the school.

The group learned that then U.S. President James Polk wanted to establish a special school to train officers for the navy and, therefore, instructed Secretary of the Navy George Bancroft to start such a school. Thus, on October 10,1845, the academy was founded as a naval school, and in 1850 it was reorganized and renamed the U.S. Naval Academy.

The school opened with 50 midshipmen, though today it has roughly 4,500. Incredibly, all of the school’s students are housed in the largest single dormitory in the world.

The Academy did not accept women until 1976, after Congress authorized their admission to all of the service academies. Midshipmen come from all ethnic groups in America, and a number of Ukrainian Americans having also attended the school.

The highlight of the walking tour was a visit to the Naval Chapel, where a magnificent sarcophagus of John Paul Jones, a naval hero of the Revolutionary War, is housed. It is noteworthy that alumni of the Naval Academy include former U.S. President Jimmy Carter and former U.S. Sen. John McCain, as well as more than 50 astronauts, including six who flew to the moon.

The group also toured the city of Annapolis, which is the capital of the state of Maryland. The city is small but charming with lovely historic colonial architecture. The group also took a cruise on the Severn River, designated as one of Maryland’s most scenic rivers. The trip concluded with a Maryland crab cake luncheon.

While the outing was a long day for the group of seniors, they all returned home safe and happy with many memories soon not to be forgotten.