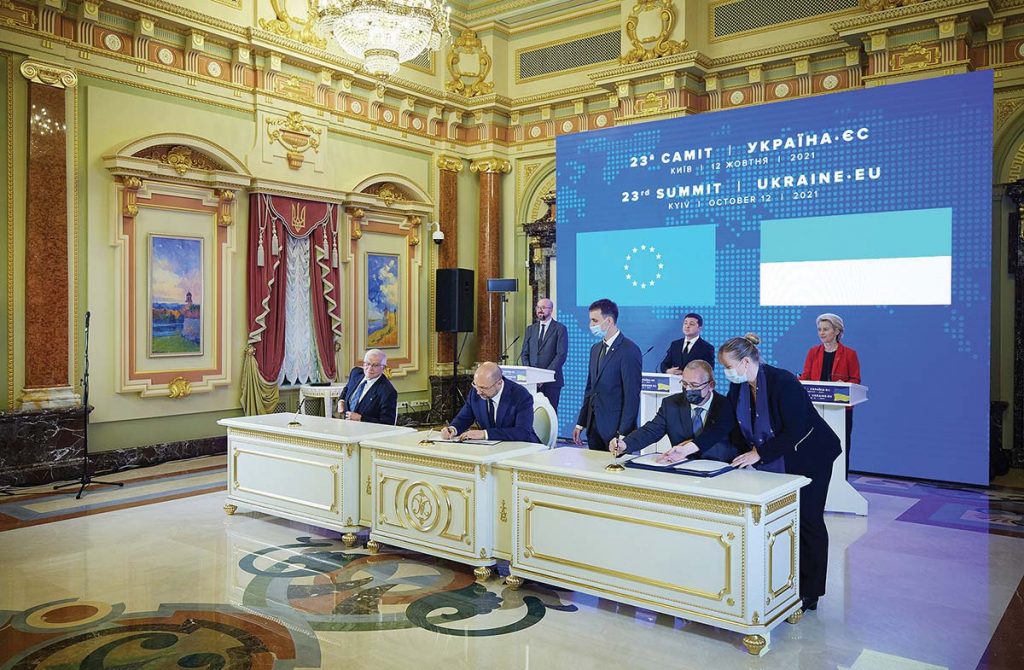 Office of the President of Ukraine
Ukrainian Prime Minister Denys Shmyhal (seated at the center of the desk) signs a Common Aviation Area agreement with the European Union’s High Representative for Foreign Affairs and Security Policy Josep Borrell (left) and Slovenian Ambassador Tomaz Mencin in Kyiv on October 12 during the 23rd EU-Ukraine summit.

KYIV – The 23rd high-level political meeting between Ukraine and the European Union (EU) ended with three agreements for further integration into the 27-nation member organization.

A joint statement in Kyiv on October 12 highlighted the strides Ukraine has made toward aligning its laws and standards with those of the EU. It also for the first time clearly laid the blame on Russia, in unambiguous terms, for the ongoing war in the occupied parts of the Donbas.

“We stressed … Russia’s responsibility as a party to the conflict,” the joint statement by President Volodymyr Zelenskyy and European Commission President Ursula von der Leyen said. “We reiterated our call on Russia to immediately stop fueling the conflict by providing financial and military support to the armed formations it backs and to withdraw the Russian military troops and materiel at the eastern border of Ukraine and on the Crimean Peninsula.”

On the eve of the yearly summit, the EU sanctioned eight more individuals for their hostilities toward Ukraine. They target judges, prosecutors and security officials who enforce Russian law on Ukraine’s Crimean Peninsula, which was forcibly seized in 2014.

Since that year, the bloc has altogether frozen the assets of 185 individuals and 48 entities and imposed travel bans to the EU.

The Ukrainian president noted that both sides “agreed to redouble their efforts to release about 450 Ukrainian citizens illegally detained by Russia.”

Among the tangible outcomes of the summit was the signing of a Common Aviation Area, which will increase air ties and safety, and remove monopolies on flight routes with the overall goal of lifting restrictions between Ukrainian and EU airports.

It should create a “level playing field and respect for the same rules,” Mr. Zelenskyy said, whose country’s official policy is to join the bloc as a full-fledged member. “These include flight safety, aviation security, air traffic management, social harmonization and environmental protection.”

The former provides an impetus for Ukrainian “researchers to work at Europe’s highest levels,” Kyiv-based Concorde Capital said in a note to investors. “There have been 49 separate beneficiaries in Ukraine thus far, and without signing Horizon Europe, access to Europe for Ukraine’s top scientists would have been impeded greatly.”

The third agreement relates to developing and promoting the “cultural and linguistic diversity and preservation of European cultural heritage,” of which Ukraine is a part, Mr. Zelenskyy said afterward.

Leading up to the summit this year, Ms. Von der Leyen noted that cooperation also deepened “on raw materials, … cybersecurity” and making the transition toward having a more environmentally-friendly economy known as the Green Deal.

In a separate statement following the meeting, she also praised Ukraine for “being among the first countries outside the EU to connect” to the bloc’s EU Digital COVID Certificate system.

Regarding the rule of law, which Ms. Von der Leyen said constitutes the “foundation” of EU-Ukraine “friendship,” the bloc will continue efforts to help Ukraine in this area.

She encouraged Kyiv to continue reforming “the judiciary,” fight “corruption and curb the influence of oligarchs.”

Last month, an external independent auditor of EU finances stated that the bloc’s reform efforts since 2014 to help fight corruption and establish the rule of law in Ukraine have made little impact.

The EU is the largest donor to Ukraine, and along with its financial institutions, has mobilized more than 17 billion euros in grants and various loans since 2014. The U.S. is the second biggest donor, having provided nearly $2 billion in development assistance and $2.5 billion in security and defense aid since 2014, according to the U.S.-Ukraine strategic partnership.

Energy security in Ukraine and Europe as a whole was also discussed at the meeting against the backdrop of skyrocketing natural-gas prices as the winter heating season approaches.

The joint statement “reaffirmed Ukraine’s role as a strategic transit country for gas and reiterated … support to continue gas transit via Ukraine [from Russia]beyond 2024,” when the country’s contract with Russia expires.

In particular, Mr. Zelenskyy mentioned Nord Stream 2 (NS2), an underground gas pipeline that connects Russia to Germany.  Once it goes online, the pipeline will allow Russia to circumvent Ukraine with gas supplies as the fuel transits to Germany.

Officials in Kyiv have consistently stressed that once Ukraine is eliminated as a strategic gas transit country, it will be left more vulnerable to Russian military aggression.

The Ukrainian president also urged the EU to extend sanctions on Moscow, especially after this autumn’s elections to the Duma, Russia’s lower legislative chamber. Mr. Zelenskyy’s request comes in response to the ongoing practice of the Kremlin to issue passports to Ukrainians residing in Crimea and the occupied parts of the Luhansk and Donetsk regions.

More than 14,000 people have been killed in the eastern Ukrainian war ever since Moscow-backed armed formations covertly invaded the area in April 2014, leaving about 7 percent of Ukraine’s territory occupied.

“The need to strengthen the sanctions pressure is long overdue,” the Ukrainian president said. “The sanctions lists should include all those who took part in the organization and conduct of ‘elections to the State Duma of the Russian Federation in the occupied Crimea, the city of Sevastopol and in the temporarily occupied territories of Ukraine in Donbas.”