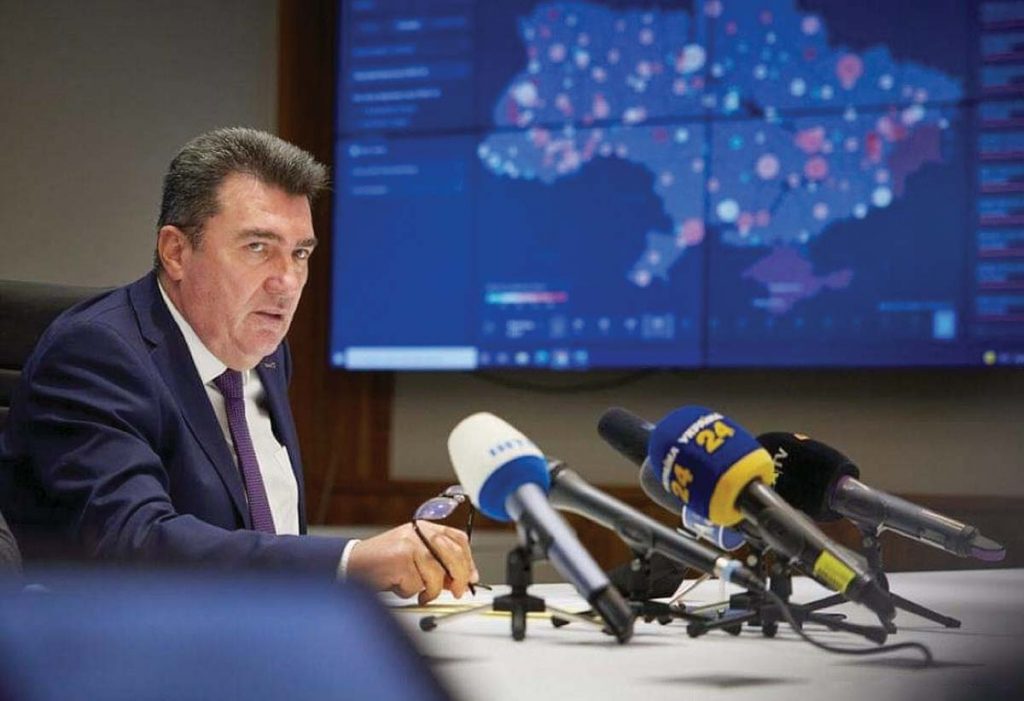 KYIV – At its latest meeting on October 15, Ukraine’s National Security and Defense Council (NSDC) approved a Defense Plan for the country that has been germinating for two years, the first of its kind since independence was restored in 1991.

Another round of sanctions was announced that target people in occupied territory who are involved in running for office or holding elections to Russia’s lower State Duma legislature. A separate package of restrictive measures shuttered the doors of a Russian retail chain operating in Ukraine, while further decisions were made to reconcile the list of those designated as high-ranking members of mafia groups.

The sanctions coincided with Russia’s belated month-long national population census, including on Ukraine’s Crimean Peninsula, which was forcibly seized in early 2014. Kyiv, Washington and Brussels have condemned the census as another step to hack away at Ukraine’s sovereignty.

After the NSDC meeting that President Volodymyr Zelenskyy chaired, his office announced that the defense document addresses “the challenges facing the Ukrainian state, in particular, [it]defines the interaction of state authorities in the event of aggravation of the security situation.”

Ukraine has been it at war since 2014 on multiple fronts ever since being invaded by Russia. Those fronts range from conventional warfare in eastern Ukraine, to cyber and informational-propaganda attacks, energy coercion and diplomatic subversion at international institutions.

Regarding the defense plan, Mr. Oleksiy, the NSDC chief, said at a briefing that it is “the first such document since independence.”

A separate strategy for information security was also approved at the meeting.

“They [Russia] use the media to influence our Ukraine, our people. Such a strategy was discussed and adopted today at a meeting of the NSDC,” Mr. Danilov said.

Ukraine’s expansive sanctions law has been in force since August 2014.

“Grounds for sanctions are [derived from]actions by people who create real or potential threats to the national interests, national security, sovereignty and territorial integrity of Ukraine, [and]promoting terrorist activities and/or violating human or civil rights and freedoms, public and national interests” are subject to sanctions, according to GoLaw, an international law firm with offices in Berlin and Kyiv.

Exactly 237 individuals face asset freezes and travel bans for their role during the September 17-19 elections to Russia’s lower legislative chamber. Particularly, 33 candidates and 54 members of the so-called election commissions in the occupied parts of the Luhansk and Donetsk regions, as well as Crimea, were sanctioned.

A day after the three-day vote in Russia, the Verkhovna Rada adopted a resolution to not recognize the outcome of the State Duma elections, deeming them “illegitimate.”

The U.S., the European Union, Great Britain and Turkey subsequently did not recognize the outcome of the elections in Crimea.

Voting in the occupied territories was enabled by what officials in Kyiv call deliberate “passportization” in violation of the Geneva Conventions that govern warfare.

The United Nations has documented the coerced conferment of Russian passports on the Crimean Peninsula, and Ukraine’s human rights ombudswoman, Lyudmyla Denisova, says the same is happening in the Donbas.

More than 650,000 Ukrainians in the occupied parts of the Donetsk and Luhansk regions have received Russian passports as of late September. And about 150,000 votes from that area were cast during the Duma elections, according to Russian state news agency TASS.

“Russia uses mass-passportization as a form of annexing populations without necessarily declaring the annexation of the territory to Russia,” the Washington-based Jamestown Foundation wrote last month.

Ukraine furthermore is worried that Russia’s population census that is encompassing Crimea will further chip away at its territorial integrity.

Delayed several times due to the ongoing COVID-19 pandemic, Russia’s last two post-Soviet censuses were conducted in 2002 and 2010.

Analysts and officials in Kyiv say the census is essentially another sham referendum on the political leanings of the peninsula’s residents because its demographic composition has drastically changed since the region was illegally annexed in 2014.

Thousands of Crimean residents have left – mostly ethnic Crimean Tatars and Ukrainians. Meanwhile, more than 200,000 Russians have been resettled to the peninsula since then, according to official data from the occupying authorities at the Office of the Federal State Statistics Service for Crimea and Sevastopol.

In addition, thousands of Crimean residents have been conscripted to the army and shipped to mainland Russia while Crimea has been heavily militarized since 2014 with mainland troops.

Ukraine’s Foreign Affairs Ministry said the census is an attempt to further “legitimize” Russia’s “attempted annexation” of Crimea and expand its legislation beyond its borders.

The EU has also has made similar statements regarding Russia’s census.

Mere, a low-cost Russian grocery store operating in Ukraine, will no longer be able to stay open in the country since it does business in Crimea, Mr. Danilov of the NSDC said.

In previous statements made publicly, he said the chain, owned by Krasnoyarsk-based brothers Sergey and Andrey Schneider through parent company Svetofor, “are not welcome” in the country.

Two stores were reported in August to operate in the southeastern Dnipropet­rovsk region, but Mr. Danilov said the last remaining store is in the Kyiv regional town of Bila Tserkva, despite the company having announced plans to open up to 40 outlets in the country by the end of the year.

“The Mere company no longer has the right to do business [in Ukraine],” the NSDC chief said.

Mr. Danilov added that 108 individuals had been mistakenly included in a previous sanctions list compiled of alleged high-level organized crime group members. They have since been removed, he said, while adding that the Interior Ministry will work to reconcile an updated list.

On May 14, the NSDC imposed personal sanctions on 557 so-called “thieves-in-law” as they are known in the criminal underground world of Ukraine, Belarus and Russia, as well as the Caucuses.