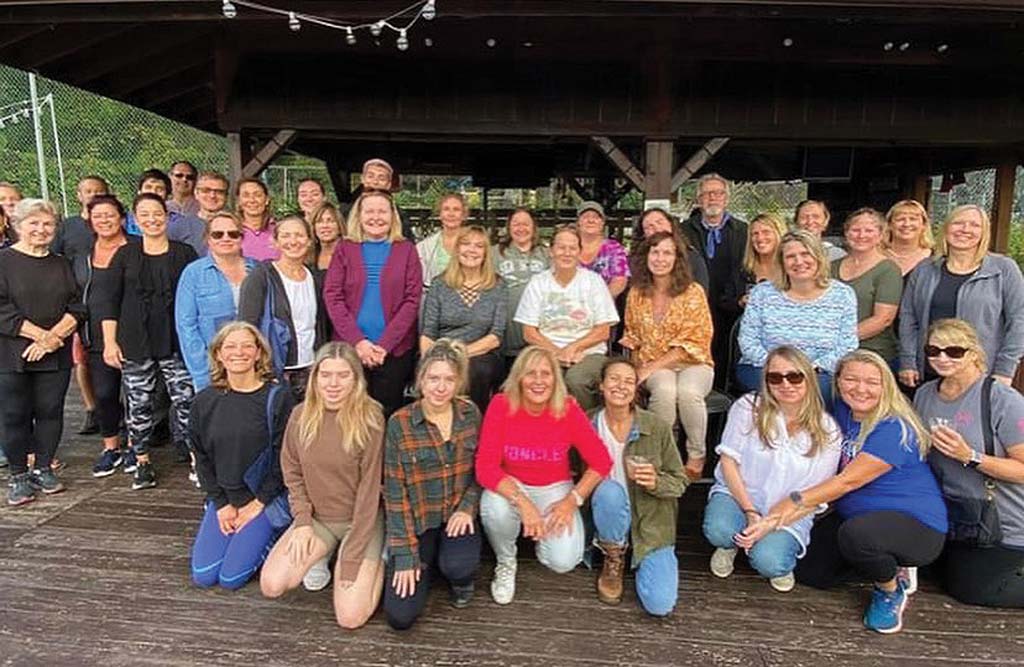 Participants of the Wild Mushroom Foraging Retreat, which took place on September 24-26 at Soyuzivka Heritage Center.

PARSIPPANY, N.J. – With the summer season at Soyuzivka Heritage Center once again impacted by the COVID-19 pandemic, the center’s staff took precautions to provide as safe an experience as possible. As a result, guests were able to enjoy weddings, retreats, camps and a variety of other events throughout the summer.

Nestor Paslawsky, general manager of Soyuzivka Heritage Center, said that, from early- to mid-May, weddings and retreats got the summer season rolling along, albeit a bit quieter than before COVID-19 began. The Soyuzivka gift shop launched its online store on May 3, and readers can visit the online store at www.soyuzivka.com/shop.

The Catskill Pysanka Workshop, held on May 21-23, attracted participants of all skill levels, from beginner to accomplished artists who learned from those who share the passion of writing and designing pysanky.

Memorial Day weekend at Soyuzivka, he said, also felt the impact of cancellations, including the cancellation of the annual Zlet youth competition hosted at the Ukrainian American Youth Association (known by its Ukrainian acronym CYM) camp in nearby Ellenville, N.Y.

The weekend of June 11-12, dubbed Bands, Beer and BBQ, included volleyball and tennis matches, swimming at the pool, corn hole competitions, as well as musical performances on the Tiki Deck and more. A Summer Solstice Health and Wellness Retreat was hosted on the weekend of June 18-20, with menu selections that promoted healthier choices, yoga and other sessions to promote relaxation, a hike to the Green Pool, and an evening bonfire. Additional options included massage and sauna sessions by appointment.

This year, Tabir Ptashat (known as bird camp), which is hosted annually by the Pershi Stezhi Plast Ukrainian Scouting Organization sorority, was also cancelled this year.

The Roma Pryma Bohachevsky Ukrain­ian Dance Academy Workshop, an intensive two-week dance program for intermediate and advanced dancers ages 16 and up, was led by camp director Ania Bohachevsky Lonkevych (the daughter of the late Roma Pryma Bohachevsky) and artistic director Orlando Pagan on June 27-July 10. The Workshop dancers were able to show off what they learned as performers at the annual Ukrainian Cultural Festival on July 10 at Soyuzivka Heritage Center.

The Ukrainian Cultural Festival at Soyuzivka Heritage Center kicked off on July 9, with a VIP Gala Fundraiser to benefit the Soyuzivka COVID-19 Relief Fund that featured a cocktail hour, a delicious three-course meal, with entertainment by Brattia z Prykarpattia, and a meet and greet with special guests visiting Soyuzivka.

Ukrainian Heritage Day Camp was hosted on July 11-17, and was limited to 20 campers, ages 4-7. Children participated in daily activities, including dance, song, crafts and games, enriching their knowledge of Ukrainian folk culture and language, building new and lasting friendships. The annual Discovery Camp was forced to cancel this year, and the Chornomorska Sitch Sports School, hosted by the Ukrainian Athletic Educational Association Chornomorska Sitch, was also canceled for this year.

The 2021 Dance Camps, with the first session on July 18-31, and the second session on August 1-14, also directed by Ms. Bohachevsky Lonkevych, were geared for children ages 8-16, with instruction for beginner, intermediate and advanced students. Each camp session concluded with a recital performance.

The 16th annual Ukrainian Adoptive Families Weekend, hosted on July 16-18, brought families who have adopted children from Ukraine to meet new friends, reconnect with old ones, and build a stronger support community for families. The weekend also afforded guests an opportunity to enjoy the amenities Soyuzivka has to offer, with traditional Ukrainian foods, Ukrainian crafts workshops, interaction with Embassy of Ukraine personnel, a performance by Olya Fryz, and a night swim under the stars in the Soyuzivka swimming pool.

Weddings continued to be hosted in August, and this year’s Labor Day weekend, Mr. Paslawsky said, was “one of my favorites.” Everyone was well-behaved, and dances were hosted that included performances by Torn Boots; a volleyball tournament and barbeque were also held. Many of the events were held outdoors, to minimize risks for guests, and Mr. Paslawsky said he was thankful that the weather cooperated.

This was the second season under COVID-19 restrictions at Soyuzivka Herit­age Center, and the recovery is going well, but Mr. Paslawsky added that this is not a normal situation. The typical weekend business had softened compared to other years, but the season ended on a positive note for Labor Day weekend. The fall season, he added, has been busy at Soyuzivka with more weddings, and a Wild Mushroom Foraging Retreat for Health and Wellness that was held on September 24-26.