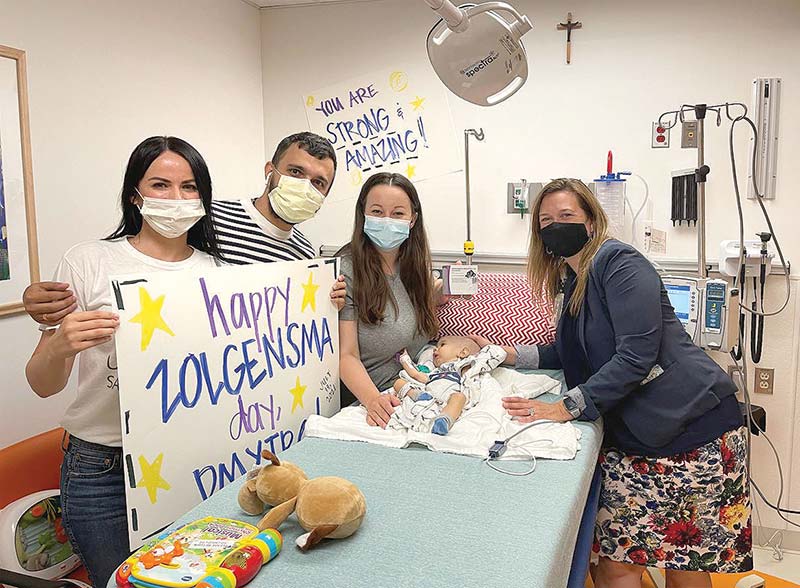 NEW YORK – Having raised more than $2 million dollars in just 80 days, the family and friends of Dmytro Svichynsky, the Ukrainian boy born with Type 1 Spinal Muscular Atrophy (SMA), saw the baby receive a lifesaving dose of the multi-million-dollar drug Zolgensma at the Children’s Hospital of San Antonio in San Antonio, Texas, on July 15.

Buoyed by their success, the Svichynsky family and their supporters have now set their sights even higher. Together with an ambitious and growing team of friends and supporters, Vitaliy and Mariia Svichynsky, Dmytro Svichynsky’s parents, want to save every person in Ukraine afflicted with SMA, a disease that targets the body’s motor neuron cells, leaving them weaker by the day until they eventually stop working and the patient dies.

With that goal in mind, the Svichynsky family and their supporters kicked off what is now becoming a movement throughout Ukraine.  That movement, known in Ukrainian as “Dity, my vstyhnemo” (children, we will make it in time), is giving the more than 250 children in Ukraine who have SMA hope that they, too, will be treated in time.

But the Svichynsky family did not begin with such a grand ambition in mind. Vitaliy Svichynsky began on his quest to raise the roughly $2.05 million needed for a single dose of Zolgensma by creating an ad hoc fundraising team in Ukraine, the U.S., Canada and Europe.  He reached out to friends and colleagues in various fields, among them civic activists, journalists, public figures and politicians.  They, in turn, spread the word about Mr. Svichynsky’s son.  In doing so, they also spread the word about the issue of SMA in Ukraine, and they learned just how big the problem is in the country.  They quickly learned of at least a dozen other families who were also fundraising for Zolgensma.

With help, the movement began to grow. On April 10, representatives of different Ukrainian American organizations held on online fundraising marathon called “Life for SMA kids.” Moderated by Ukrainian journalist Vakhtang Kipiani, the event brought together Members of the Verkhovna Rada Ivan Krulko, who heads parliament’s budget committee, and Serhiy Koleboshyn, as well as a representative from Ukraine’s Ministry of Health, Arsen Dzhumadilov.

During that event, Mr. Svichynsky proposed that Ukraine, which had recently adopted a new way of acquiring innovative drugs, use the measure to procure treatments for SMA. If implemented, the procedure could begin in Ukraine by the end of 2021. The measure requires that pharmaceutical companies first submit formal evaluations of a given drug to the Ukrainian government. Parliament would then need to pass a bill allowing its use.

But members of the growing campaign to save everyone with SMA in Ukraine still did not know whether the country’s politicians had the will to fund the treatment of SMA on a national scale. The team got back to work with a goal of completing the fundraiser for Dmytro Svichynsky, but now they had an added goal of ensuring that every child in Ukraine afflicted with SMA will be treated.

On May 26, just days after the fundraiser for Dmytro closed, Mr. Svichynsky, together with representatives from Razom, the Ukraine-based non-profit Manifest of Peace, the charitable fund Kiddo and the digital marketing company MAS agency, held a press conference in Ukraine.  At the press conference, held at the Ukrainian news agency Ukrinform, organizers put forth their vision of a comprehensive SMA program in Ukraine.  They officially kicked off “Dity, my vstyhnemo” (children, we will make it in time), a campaign that is now supported by the Ukrainian American Business and Professionals Association, Big Dreams Children’s Foundation, Ukrainian San Antonio and the Honorary Consulate of Ukraine in Pennsylvania.

There are currently three treatments on the market for SMA.  Zolgensma, a gene therapy medication, is only approved for use in children under age 2 (or children who weigh less than roughly 30 pounds). Two other medications – Spinraza and Evrysdi – are available to treat older children, but they require life-long treatments.

This leaves some 230 Ukrainian children and their families desperately waiting for the Ukrainian government to procure either of the other two medications – Spinraza or Evrysdi, which are registered for use in Ukraine.

The movement spearheaded by Mr. Svichynksy hit a major turning point on June 18 during a meeting with Ukraine’s new minister of health, Viktor Liashko. Joined at that meeting by representatives from multiple patient advocacy groups, Mr. Svichynsky made one incisive request of Mr. Liashko. He asked that the minister help cut through the bureaucratic red tape to speed up the process of buying the much-needed SMA treatment that 38 countries, including Ukraine’s neighbors, Poland and even Russia, already provide to their citizens for free.

Meanwhile, Mr. Svichynsky and the team decided to create a website to showcase stories of SMA patients, making their plight visible and known to the public. The group launched the website vstygnemo.org.ua in August, timed with SMA awareness month.

To advertise the site, the team printed endearing stickers with smiley faces and signs that read “Let’s save SMA kids,” “SMA is treatable,” and “We will make it on time.”

Mr. Svichynsky and the team engaged parents of SMA children to reach out to their local government representatives, spread the stickers and advocate for the rights of their children.

The sticker campaign culminated on September 7, when each member of the Verkhovna Rada received a sticker and a flyer about SMA. Representatives of each political faction came up to the Rada podium, SMA stickers attached to their lapels, while Mr. Krulko made a passionate speech to support SMA by asking that all members vote for law needed to procure innovative medicines and ensure there is money in the 2022 budget to fund medications for SMA.  The law was approved exactly two weeks later by an overwhelming majority.

How was it possible to achieve so much success so quickly? The answer lies in Mr. Svichynsky, who is a master community and political organizer. He began the campaign for his son by bringing together a wide network of activists he previously worked with in Odesa in 2014, when he organized an ad hoc group widely credited with saving the city from Russian occupation.

Mr. Svichynsky said that networking, training and advocacy is a constant job and is done on many levels, from working with one individual person to working a national level.

Oleksii Zakharchenko, the director of the MAS digital marketing agency, is one of the key figures who does social media promotion for the campaign. He organized a highly sophisticated workshop on managing fundraisers that trained new volunteers. During that workshop, Mr. Svichynsky emphasized that a successful campaign needs to be ready to substitute an individual whenever the group, for whatever reason, loses a member.  Doing so then taps into the unique resources of each new member, Mr. Svichynsky said.

This expert planning yielded a substantive increase in public and government support. The entire healthcare committee of the Ukrainian parliament, headed by Mykhailo Radutsky, has affirmed that the committed supports the plan to procure SMA medications in Ukraine.

Ukraine’s minister of infrastructure, Oleksandr Kubrakov, has become an ardent spokesperson for SMA treatment in Ukraine. Media coverage has grown considerably with four of the largest channels reporting on SMA campaign developments.

Perhaps most importantly, on July 29 Andriy Sadovyi, the mayor of Lviv, urged Mr. Zelenskyy to take up and support the cause.

“Please Mr. President, only you can do this,” Mr. Sadovyi said during a Joint Session of the Presidium of Local and Regional Authorities and the president of Ukraine, which also included the participation of the prime minister and the cabinet of ministers.

“Give every one of these 250 children before they reach the age of 2 the chance to live!,” Mr. Sadovyi said.

On June 1, Mr. Zelenskyy announced that Ukraine will start early SMA screenings by January 2022, which is crucial for detecting SMA in enough time that a child can receive a treatment of Zolgensma.

Indeed, the progress made by the campaign has been tremendous, and Mr. Svichynsky has said that it will continue until all SMA patients in Ukraine are treated.

Olya Yarychkivska, who heads the U.S. branch of the SMA campaign on behalf of Razom, said members of the group are motivated by the campaign’s success and greatly encouraged by the promise Mr. Zelenskyy made to Ms. Yarychkivska to procure SMA medicines after she handed him a stack of smiley stickers during a community meeting on September 21 at the Ukrainian Institute of America in New York City.

“Our vision is to see Ukrainian children born with SMA get early diagnosis and treatment so they can grow up normally. We see this in the U.S. where all drugs are covered by insurance,” Ms. Yarychkivska said.