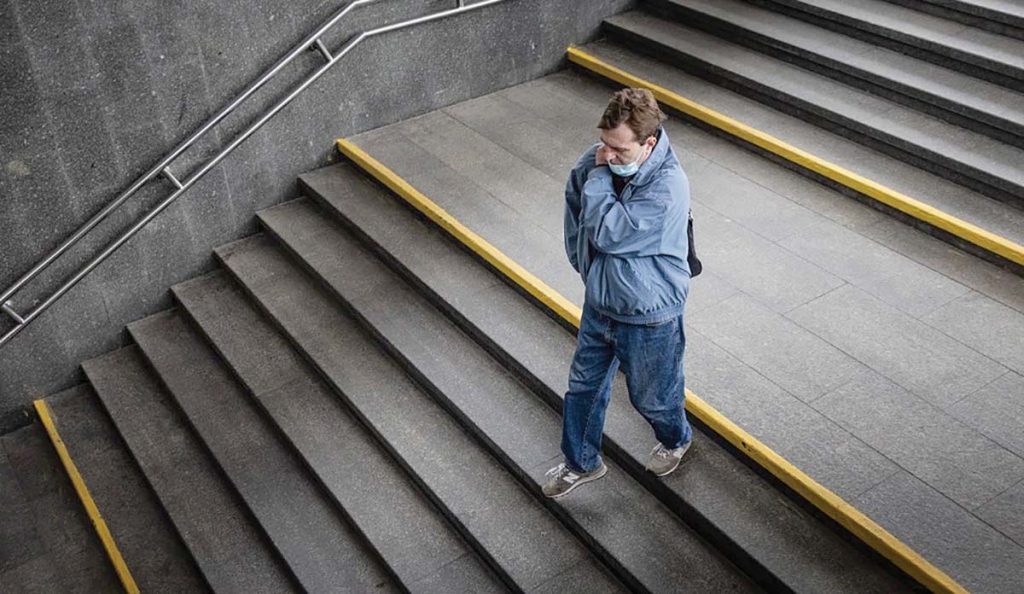 Andriy Dubchak/RadioSvoboda.org via RFE/RL
An unidentified individual in the Ukrainian capital, Kyiv, walks into the city’s metro as the country has implemented a new round of pandemic restrictions meant to halt the spread of COVID-19.

LVIV – With new COVID-19 cases once again surging in Ukraine, the government announced the country was now in a “yellow” epidemic level. The move, which imposes limits on public gatherings and large events and includes mandates for wearing masks and social distancing, came after a special sitting of the State Commis­sion on Technogenic and Environ­mental Safety and Emergencies on September 21.

Prime Minister Denys Shmyhal stressed that vaccination is currently the most effective way to combat COVID-19, and the state has provided free vaccinations for anyone who wants a vaccine.

Mr. Shmyhal noted that, while the Cabinet of Ministers approved of moving the country’s epidemic level to yellow, the ministers also eased certain restrictive measures on financial and educational institutions. Those institutions would be allowed to continue working even in the “red” zone so long as certain conditions are met, including that 80 percent or more of the staff have been vaccinated.

“Restrictions of the ‘yellow’ and ‘red’ zones will not apply to those venues where staff and visitors are vaccinated, have a negative PCR test … This is the method that is successfully used today by several European countries to save people and at the same time not to halt the economic activity of the country,” Mr. Shmyhal said.

Additionally, per the Ukrainian government, most yellow zone restrictions would not affect fully vaccinated citizens. Ukrainians can also still travel abroad with a vaccination certificate.

These exemptions have created a situation in which vaccination certificates are now being forged in the country.

In Ukraine, forged COVID-19 vaccination certificates and PCR tests have been recorded on a large scale in recent weeks. Forgeries were found, for example, in the Chernivtsi, Lviv and Ivano-Frankivsk regions.

In the Dnipropetrovsk region, a doctor and an accomplice allegedly entered false information about vaccination status into an electronic database of the Ministry of Health in return for a bribe of 6,000 hryvnias, according to Mykhailo Radutskyi, chairman of the Parliamentary Committee on Health of the Nation.

“As the incidence of COVID-19 increases, there are increasing reports of the purchase of forged international vaccination certificates as well as certificates of contraindications to vaccination,” Ukraine’s Ministry of Health said in a statement.

“In addition to the fact that forgery of documents is a crime and punishable by law, the presence of people with forged documents poses a threat to the health and lives of others. If a person with a forged certificate was deported from abroad, it is unfortunate but not fatal. But suppose such a person, using a certificate, infected an old man or woman, a pregnant woman, or a cancer patient with coronavirus disease. In that case, the consequences of his actions can be extremely severe,” the press service of the Ministry of Health wrote on its official Facebook page.

According to the ministry, officials at the National Police of Ukraine, the Security Service of Ukraine and the Ministry of Health are working together to identify forged vaccination documents, and cases are being investigated thoroughly.

The Ministry of Health will seek the removal of the heads of medical facilities whose employees forge COVID-19 vaccination documents or enter false patient data and will revoke the licenses of such facilities if this practice continues, according to Minister of Health Viktor Liashko.

“We will formally send a petition to the owners of the health care facilities where these doctors work, requesting that the head of this facility be removed from office for the duration of the investigation until the managers themselves are involved in the actions of their subordinates,” Mr. Liashko said.

“Managers should also be personally responsible for what happens in their hospitals. And in case of repeated violation, the Ministry of Health will initiate the revocation of the license of the health care institution and the termination of the contract between the institution and the National Health Service of Ukraine,” Mr. Liashko said at the government meeting on September 21.

The Cabinet of Ministers supported a draft law envisaging a liability for forgery of documents related to preventive vaccinations.

“Forgery of vaccination documents, especially COVID-19 certificates, is a threat to society as a whole, and we will respond accordingly,” Mr. Shmyhal said.

According to a survey by the sociology company Fama, 42 percent of respondents the survey agree that vaccination against COVID-19 is a way for the government to total control Ukrainian citizens.

Moreover, 48 percent of the respondents said they believe the virus was artificially designed to combat overpopulation, and, in particular, to destroy the elderly; only 40 percent said they agree that masks are effective in curbing the spread of COVID-19; 18 percent think that alcohol and garlic are the best prevention of COVID-19; 14 percent believe that the virus does not spread in churches and temples because it is a holy place. The survey was conducted in the west of Ukraine.

Currently, vaccination against COVID-19 in Ukraine is not mandatory. However, there have been cases where workers have been required to be vaccinated at the local level. For example, in late August, Ivano-Frankivsk Mayor Ruslan Martsinkiv threatened city council employees with dismissal if they were not vaccinated against COVID-19.

In addition, government officials have tried various ways to encourage and incentivize Ukrainians to get vaccinated. For example, the government has said that vaccinated Ukrainians will be able to visit public institutions even when the country is classified in the “yellow” and “red” zones.

Officials have also tried to promote vaccinations at the local level. For example, in Ivano-Frankivsk, the local government decided to give vaccinated residents 100 hryvnia for public transport and tickets for home matches of the Prykarpattia football club.

As of September 28, roughly 12.5 million vaccines have been administered in Ukraine, according to the Ministry of Health.

At the same time, the Ministry of Health said it will need to throw out 34,000 doses of the COVID-19 vaccine from Pfizer, according to the Mr. Liashko, after the ministry discovered that those vaccines were improperly stored at the wrong temperature.

“We cannot allow the vaccine into circulation where the temperature requirement has been violated,” Mr. Liashko said.