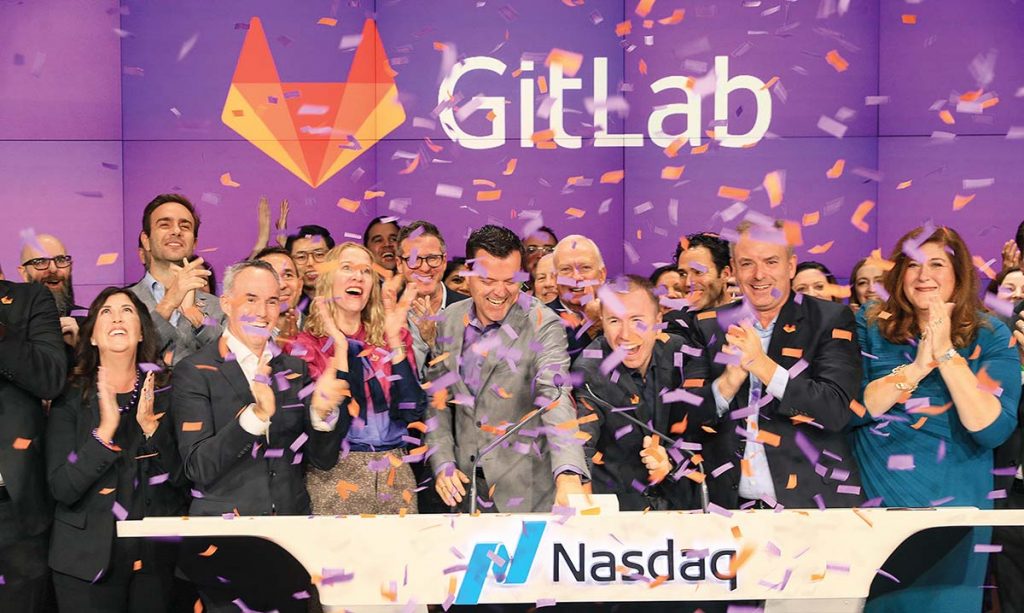 GitLab’s Twitter account
Members of the Ukrainian company GitLab – including Sid Sijbrandij (center wearing gray jacket) and Dmytro Zaporozhets (center, to the right of Mr. Sijbrandij) – take part in the company’s IPO on the NASDAQ stock exchange on October 14.

LVIV – The Ukrainian startup GitLab, founded by Dmytro Zaporozhets and Valeriy Sizov, held an initial public offering (IPO) on ​​the NASDAQ stock exchange on October 14. On its first day of trading, the company’s stock price rose by 35 percent to $103.89 per share, while the company’s capitalization rose to $14.9 billion.

With a capitalization of over $1 billion in September 2018, GitLab became what is known as a “unicorn” startup. In business, a “unicorn” is a privately held startup company valued at over $1 billion. Although Mr. Zaporozhets created GitLab, the company is now led by Sid Sijbrandij, who has been the CEO since 2012.

Mr. Zaporozhets, 32, was born in Kharkiv. He is ranked 28th in Forbes’ list of the 100 richest Ukrainians. In 2011, he and Mr. Sizov created GitLab, which, according to the company’s website, provides its users with “a single application that spans the entire software development lifecycle.” GitLab is, essentially, a web-based software development company.

Until 2013, GitLab was distributed under a free license. It eventually became popular among computer programmers. In 2014, GitLab was registered in Delaware, and in 2015 it raised its first $1.5 million in funding and began working with Y Combinator, an American company that specializes in helping startup companies grow.

GitLab, which is designed to help professional programmers, allows softward developers to store code on their server, unlike their main competitor – the service GitHub, which Microsoft bought in 2018 for $ 7.5 billion. The Ukrainian service is more convenient for companies because GitLab uses open-source computer code that makes their product highly customizable.

The company’s products are now used by more than 100,000 organizations, including Qualcomm, NASA, NASDAQ and Interpol. In May 2021, Forbes included GitLab on its list of the best U.S. startup employers.

While the company is headquartered in San Francisco, Mr. Zaporozhets still considers it to be a Ukrainian startup.

The company currently employs 1,350 people from 65 countries. Many of its employees were working remotely even before the COVID-19 pandemic forced many companies to have their employees work remotely. For example, Mr. Zaporo­zhets and several other GitLab employees work from Kharkiv.

The company’s CEO, Mr. Sijbrandij, will earn the most from GitLab’s IPO. According to the prospectus for the issue of GitLab shares, he owns 18.9 percent of the stock in the company. As of October 18, the value of that stock was about $ 3.1 billion, while the capitalization of the entire company was valued at $16.45 billion.

Mr. Zaporozhets is not on the list of shareholders who own 5 percent or more of the shares. In a 2018 interview, he declined to comment on how he split the company with Mr. Sijbrandij in 2013-2014.

Mr. Zaporozhets currently owns about 2.5 percent of the stock in the company, which in total is valued at about $384 million, making him 28th richest person in Ukraine, according to the Forbes rating.

Despite its valuation, GitLab lost $130 million in 2020, and it is expected to lose $190 million in 2021. But analysts estimate the company is approximately 50 times more valuable than what it makes in a year, according to the online newspaper TechCrunch, which writes about high tech and startup companies.

“GitLab’s $15 [billion]IPO is a triumph and a role model for many aspiring entrepreneurs around the world. No matter where you’re from, you can create tremendous value,” said Yaroslav Azhnyuk, the CEO of the Ukrainian startup Petcube.

“Given Dmytro is Ukrainian, it seems like GitLab is now the second-largest tech company out of Eastern Europe, next only to UiPath, which has Romanian roots,” Mr. Azhnyuk wrote on his Facebook page.

GitLab is not the only Ukrainian IT success story. In October 2019, the startup Grammarly became another Ukrainian “unicorn” with a capitalization of over $1 billion. At the same time, the company attracted $90 million in investment.

Additionally, in May 2021 the space company Firefly Aerospace, which is owned by Ukrainian businessman Maks Polyakov, announced its entry into the category of “unicorns.” After attracting $200 million in investment, the capitalization of Firefly Aerospace exceeded $1 billion.

In August 2021, the Ukrainian startup People.ai also became a “unicorn” – the company attracted $100 million in investment after which its capitalization reached $1.1 billion. People.ai is working on solutions for collecting data from CRM (calendars, calls, letters), which will help organizations improve their efficiency. One of the startup’s clients is Zoom.

“I have an interest in human expansion,” GitLab’s founder Dmytro Zaporozhets said in an interview with Forbes Ukraine. “With a large sum on hand five years ago, I would be happy to invest in SpaceX, as they move humanity forward. In addition, I am concerned about energy. Human development is limited to energy needs. I would be happy to help humanity increase energy production many times over,” Mr. Zaporo­zhets said.

Mr. Zaporozhets continues to work at GitLab as an Engineering Fellow – he is a high-level engineer who deals with experimental projects and new features. He is now considering taking a sabbatical for a year.

“I want to do nothing for about a year. It remains only to determine the time – I will pause in 2021 or 2022. It depends on the company’s plans for me, how critical my temporary absence will be,” Mr. Zaporo­zhets said. “I want there to be no order in life but freedom to reign. If you want, go on a trip with friends for a week; go to Asia, if you want. You can sit for a month and play Xbox. What is important is the absence of a schedule.”