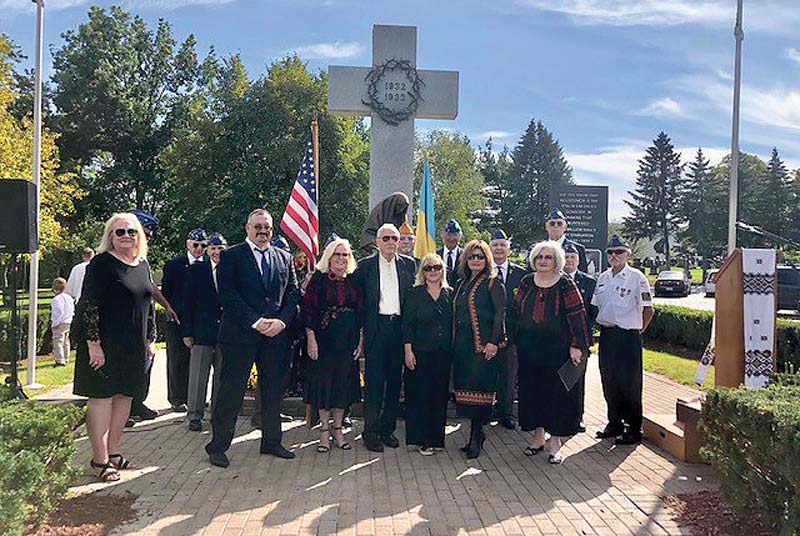 BLOOMINGDALE, Ill – Taking into account ongoing COVID-19 pandemic regulations, the Ukrainian Genocide Famine Foundation invited the Ukrainian community of Illinois to participate in a virtual Ecumenical Memorial Service in memory of the victims of the Holodomor.

The service was live-streamed on September 26 on the St. Andrew Ukrainian Orthodox Cathedral-Orthodox Church of Ukraine YouTube Channel (https://www.youtube.com/channel/UClbtFOPAdd2sQ4Oz-Oylomg).

The memory of the Holodomor victims was honored by the Very Rev. Victor Poliarny, secretary of the Vicariate of the Orthodox Church of Ukraine in U.S.A., Australia, Canada and Japan; Consul General of Ukraine in Chicago, Serhiy Koledov; and Mykola Kocherha, president of the Ukrainian Genocide Famine Foundation. Victor Rud, who has been widely published and has spoken domestically and internationally on issues bearing on western-Russian relations, served as keynote speaker (his speech was given virtually).

Remarks by Messrs. Koledov and Rud reminded the participants that the Holodomor was not the only famine or starvation that affected Ukraine. The people of Ukraine suffered starvation and epidemics in the early 1920s. The Holodomor of1932-1933 was much more detrimental to the lives of people than the previous collectivization that occurred from 1929-1932.  That period was also accompanied by mass persecution of Ukrainian culture, language, church and intelligentsia. And the famine of 1946-1947 was the result of poor agricultural infrastructure and drought.

However, it was Stalin’s totalitarian regime that in 1932-1933 systemically and quickly exterminated all those who tried to think, speak, act and create freely. The best members of Ukrainian society were subjected to an unjust trial, imprisoned, tortured and deported. The victims of repression were intellectuals and priests, workers and peasants, men, women and children.

Mr. Koledov explained that during the first six months of 1933, all of the regions of the USSR and districts of the Moldavian ASSR were impacted by the Holodomor. The victims were Ukrainian peasants who lived throughout the rural areas of the USSR. Ethnic minorities living compactly in Ukraine also suffered from hunger. Deaths from starvation were massive.

“For many decades, whole generations of Ukrainians were intimidated, and not only peasants, but the will of the entire Ukrainian nation to resist the totalitarian system, to national revival, was broken,” Mr. Koledov said.

In 2010, a Ukrainian court found the leaders of Stalin’s totalitarian regime guilty of Holodomor as a crime.

“The official commemoration of the Holodomor victims, including its recognition as a genocide of the Ukrainian people, began at the initiative of the Ukrainian diaspora in the United States and Canada. Holodomor as a genocide is recognized and condemned by 16 countries worldwide. In the United States, Holodomor is recognized as genocide against the Ukrainian people in 21 states, seven of which belong to the Consulate General of Ukraine, Chicago District [Illinois, Michigan, Wisconsin, Kansas, Missouri, Minnesota, North Dakota],” Mr. Koledov said.

Throughout the years, historians, statisticians and sociologists have debated the number of victims who perished in the Holodomor. Mr. Kocherha indicated that the most recent data on the topic was provided during an international forum entitled “Mass artificial famines: remember, honor” held in Kyiv in September.

Valery Shepitko, president of the International Congress of Criminologists and a member of the National Academy of Legal Sciences in Ukraine, said that, “The communist totalitarian regime committed a particularly serious crime – genocide of Ukrainians and destroyed 10.5 million Ukrainians, including 4 million children.”

Rev. Poliarny focused on the need to continuously and relentlessly remind the world about the greatest horror inflicted on the Ukrainian people. The Holodomor, he said, is a deep wound that permeates the memory of its eyewitnesses with unbearable pain; many eyewitnesses have passed. It is now the duty of the younger generations not to let the memory of the Holodo­mor fade away, Rev. Poliarny said.

“Holodomor was the price paid by the Ukrainian people for their desire for freedom,” he added.

“How do we establish a future? How do we regain the essence of our identity which the Holodomor intended to destroy, and which many are still in the process of regaining? We either have to decide that we are simply an abrogation of biological cells, or we are members of a nation,” Mr. Rud said.

The Ukrainian Genocide Foundation is most grateful for the generous donations and support from our Ukrainian community organizations and individual donors. Members of the Foundation will continue to encourage and support research related to this crime of the century, disseminate information and raise awareness of this tragic period in the history of Ukraine and the history of the world.

Maria Korkatsch-Groszko, Ph.D., is member of the executive board of the Ukrainian Genocide Famine Foundation.