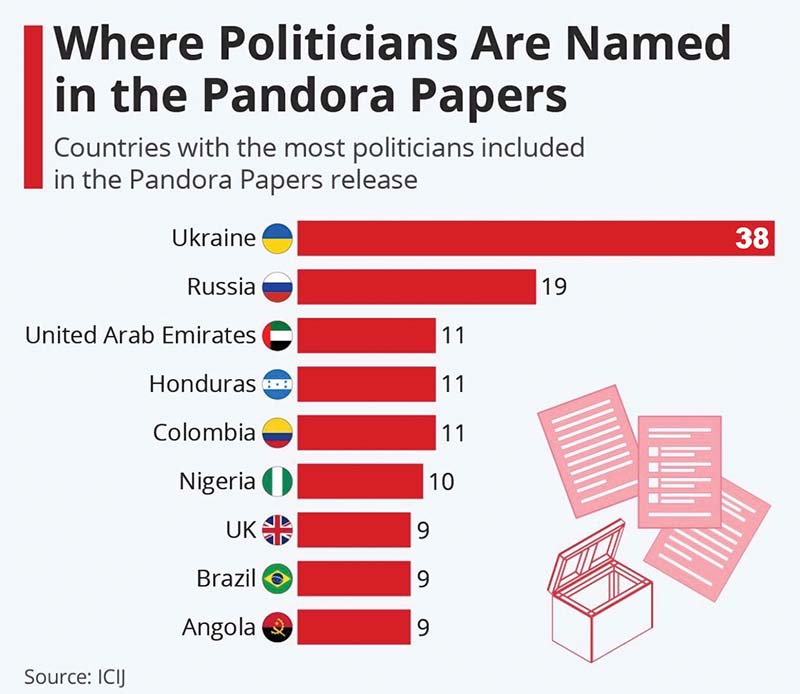 KYIV – Two Ukrainian corruption-fighting agencies are reviewing the asset declarations of the president and head of the country’s main counterintelligence agency, as well as the financial transactions of a bank related to them following the biggest leak ever of offshore financial records.

A trove of 12 million files from 14 corporate service providers who cater to clients in financial secrecy jurisdictions was leaked to the International Consortium of Investigative Journalists (ICIJ), which show that 38 Ukrainian politicians use the providers to conceal their wealth and assets.  The leak has been dubbed the Pandora Papers.

Among the Ukrainian politicians embroiled in the scandal is President Volodymyr Zelenskyy, his childhood friend Ivan Bakanov, who heads the main counterintelligence agency, the Security Service of Ukraine (SBU), and top presidential aide Serhiy Shefir, who was recently the target of an assassination attempt near Kyiv.

The global investigation into the leaks, headed by ICIJ in concert with more than 600 journalists in 117 countries, started publishing stories on October 3. After their gradual release over the week, with more expected to come, two Ukrainian law enforcement agencies started or revisited their own probes into possible malfeasance.

The National Agency on Corruption Prevention (NAZK) said it would re-visit the mandatory asset declarations that Messrs. Zelenskyy and Bakanov had filed over the years given the revelation that two companies in offshore tax havens associated with them were not previously declared.

Since the president’s top aide, Mr. Shefir, works on a pro-bono basis, he is not required to file income declarations, although he was listed in the leaked offshore records in tandem with the two as holding an equal share in an undeclared company. Mr. Shefir was listed along with his brother.

NAZK chief Oleksandr Novikov told journalists during the week that the declaration checks would “include material from journalists and we are cooperating with them,” he said, referring to the splash of news stories that were based on the 3 terabytes of data that ICIJ had received.  ICIJ did not say how or from whom they obtained the data.

Chief prosecutor Iryna Venediktova said on Facebook the Pandora leaks offered “no surprise” and that any money the president or his associates received from PrivatBank when it was still co-owned by oligarchs Ihor Kolomoisky and Hennadiy Boholiubov “is currently under the microscope.”

The National Anticorruption Bureau of Ukraine (NABU) is still looking into PrivatBank’s dealings under Ms. Venediktova’s personal control in a global investigation that involves money laundering in the U.S. where the Federal Bureau of Investigation is conducting its own probe.

Her comments were in reference to the bank that was nationalized in December 2016 after U.S.-based corporate forensic investigator Kroll and Ukraine’s central bank discovered a $5.5 billion hole on its balance sheet.

Some of the money from PrivatBank’s Cypriot branch when it was still privately held had found its way through to Mr. Zelenskyy’s associated accounts, according to the Pandora Papers.

Presidential spokesperson Serhiy Nikoforov told The Ukrainian Weekly that the “president will not comment directly” on the matter.

Mr. Zelenskyy in 2019 had campaigned on a promise to crack down on dirty money and the grip that oligarchs have on the country in what an independent European Union auditor described in September as “state capture” by vested interests.

He criticized his predecessor, multimillionaire confectioner Petro Poroshenko, of hiding his wealth in lower-tax jurisdictions and for owning a chocolate factory in Russia at a time of war.

The Pandora Papers represent a mega-leak of data that reveals how the world’s political elite, ultra-rich, celebrities and criminals use offshore tax havens, including in the U.S., to shelter their wealth.

While holding an offshore bank account or firm isn’t illegal and is legitimate for certain purposes, the shadowy jurisdictions – from Belize, the British Virgin Islands (BVI), Singapore, Switzerland, Panama, even to Colorado and Delaware – offer secrecy for those wishing to launder money, evade taxes or hide ill-gotten gains.

The data divulgence differs from two previous offshore leaks in 2016 (Panama Papers) and 2017 (Paradise Papers) in that they stemmed from one law firm, not 14 industry service providers, as is the situation in this case.

Unlike financial institutions who service the offshore industry, “enablers,” as the ICIJ and other media outlets call them, include lawyers, estate and company formation agents, and accountants, all of whom are not obligated to report suspicious financial activity to regulators or law enforcement authorities.

Altogether, the Pandora Papers lists 35 current and former national leaders and 130 people on the Forbes list of billionaires, some of whom are Ukrainians.

Ukrainian politicians feature most in Pandora

While Russian individuals are disproportionately listed most in the offshore data, numbering more than 50, there are 38 Ukrainian politicians included in the documents, the most of any country.

Two weeks before Mr. Zelenskyy won the first of two rounds of voting in the 2019 presidential election on March 13, 2019, he secretly transferred his stake in an undeclared BVI firm to Mr. Shefir, his current top aide, who also produced the former comedian’s hit comedy shows at their Kvartal 95 Studio.

Documents do not show if the president received monetary compensation during the share transfer.

The current SBU chief, Mr. Bakanov, had witnessed the transfer and signed off on the transaction. In turn, a company that the SBU head hasn’t declared – Cypriot-based Davegra Limited – appears to have become the nominal owner of the company – Maltex Multicapital Corp. – whose stake the president had transferred to his associate.

Six weeks later, their acquainted lawyer for the Kvartal 95 Studio Yuriy Azarov signed off on another document that stipulated dividend payments to the president from Maltex to his Film Heritage, which is currently owned by First Lady Olena Zelenska.

Records do not show the president having received dividend payments.

This company has rights to receive dividend payments from the company whose quarter share the president had transferred to his top aide. Andiry Yakovlev, a film director and Kvartal 95 producer, also holds a 25 percent stake in Maltex.

Maltex’s client profile said its main revenue comes from activity in Ukraine, Belarus and Russia where the president’s comedy shows and films have enjoyed popularity. One document, according to London-based The Guardian – a participating media outlet in the global Pandora investigation – states that “one reason for establishing Maltex was ‘tax-efficient accumulation of business profits.’”

Presidential adviser Mykhailo Podolyak told the UNIAN news agency that nothing is unbecoming of the situation given that the president, “since being elected, hasn’t engaged in business after May 2019,” he said, referring to the month and year when the president recorded a landslide victory in the second round of presidential voting.

Mr. Shefir’s brother, Borys Shefir, told journalists that the web of offshore companies the Kvartal 95 group had set up dating to 2012 was “to protect” their business interests.

At that time and still today, companies solely registered in Ukraine are exposed to risks of what is called “raider” attacks by preying competitors who use the country’s corrupt courts and notary publics to forge documents and forcibly seize assets.

Still, the ongoing offshore holdings of Mr. Zelenskyy and his associates raises ethical questions of why he doesn’t transfer them back to Ukraine amid his campaign promise to clamp down on corruption and curb the sway that tycoons have in politics and business. Their complicated offshore web of layered company holdings also raises red flags for possible tax evasion charges.

The labyrinthine network of companies set up by Kvartal 95 from at least 2012 coincides with when Mr. Zelenskyy started selling his comedy shows, sitcoms and skits to Mr. Kolomoisky’s 1+1 Media group, which provided his campaign with favorable news coverage.

Some of the $41 million that the Kvartal 95 group of companies have since received from Mr. Kolomoisky-affiliated or owned firms, according to ICIJ, included the now-nationalized PrivatBank.

The Pandora leaks do not indicate that the money Mr. Kolomoisky had allegedly embezzled through PrivatBank had ended up in bank accounts associated with the president, although one of Kvartal 95 group’s companies held an account in the Cypriot branch of the financial institution – the same branch from which it had received money.

In addition, the more than $40 million that came from Mr. Kolomoisky was “formally paid as statutory capital,” Slidsvo.info, a Ukrainian media outlet which is part of the global investigation, reported.

This means that the money “could’ve been used by [Mr.] Kolomoisky to become a shareholder,” Kyiv-based Dragon Capital investment banker Serhiy Fursa told The Ukrainian Weekly.

He also said it doesn’t first appear that the president’s affiliated companies were recipients of laundered money.

“The money they got was probably after [Mr.] Kolomoisky had rinsed the money along a trail of companies from PrivatBank. That’s how he could’ve paid players from his soccer team [in the city of Dnipro]and the foreign coach of the club [at that time],” Mr. Fursa said.