Ukraine justifies use of battle drone against Russian forces, while allies criticize ‘escalation’ 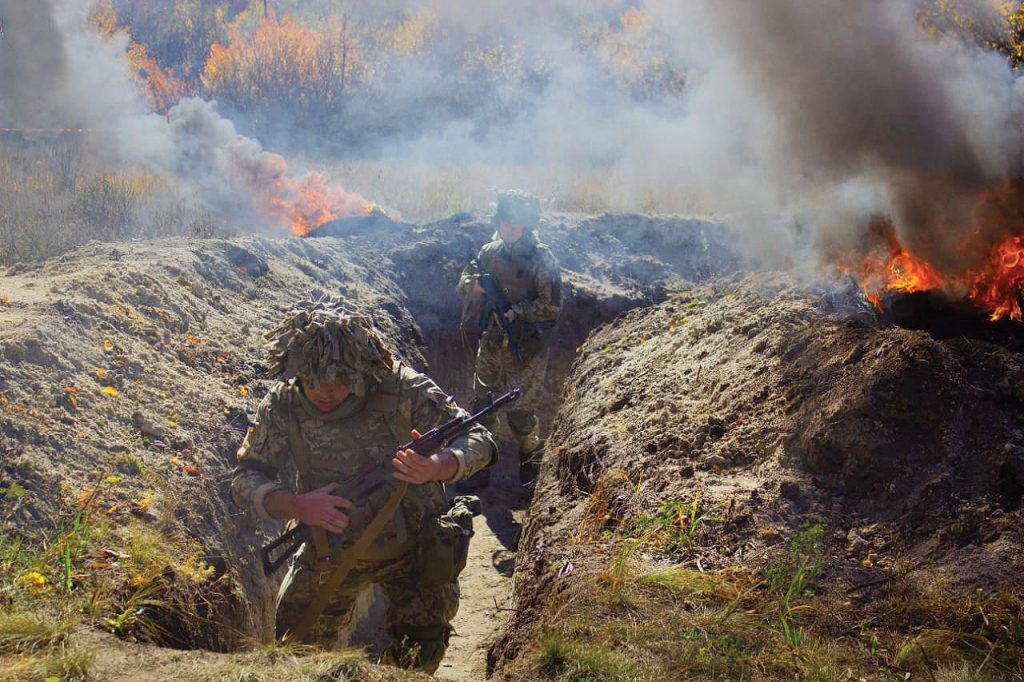 General Staff of the Armed Forces of Ukraine

KYIV – It all started on October 26 when Lt. Gen. Valeriy Zaluzhny gave the order to deploy a tactical drone for the first time in the war zone of eastern Ukraine to suppress fire from Russian artillery installations that had led to the death of a soldier.

A battery of Russian D-30 howitzers had been shelling Ukrainian positions near the front-line town of Hranitne in Donetsk Oblast for 50 minutes that afternoon while wounding two more soldiers.

After the projectile salvo started, “a ceasefire was immediately demanded through” the war monitoring mission of the Organization of the Security and Coopera­tion in Europe (OSCE), Ukraine’s military said on Facebook.

A note was also “sent through diplomatic channels” without a response from “the [Russian] occupiers,” the social media post added.

So, the commander-in-chief of Ukraine’s Armed Forces sent a battle-proven, Turkish-built Bayraktar drone to conduct a precision strike on the Russian-held positions. A video released by the Ukrainian military showed at least three howitzers positioned along a road facing an open field with one of them being hit by a projectile from an unmanned aerial vehicle.

Mixed statements from Russia, the United States, Germany and France ensued after the retaliation.

Germany and France, countries that have taken part in four-way talks to broker a truce that has never taken hold in the ongoing war in eastern Ukraine, issued statements saying they were “concerned” by Kyiv’s use of a combat drone to defend its territory without mentioning Russia’s consistent, more abrasive, actions in the war zone.

German Foreign Affairs Ministry Spokesperson Andrea Sasse voiced concern over “the message” that Ukraine’s army was sending with the use of “a Bayraktar-type drone.”

An Élysée Palace comment from French Foreign Affairs Ministry spokeswoman Anne-Claire Logander said that Ukraine’s use of the drone contradicted “measures to strengthen” a truce in the war that has killed 14,000 people when the conflict started in April 2014.

Ukrainian President Volodymyr Zelens­kyy, while attending the United Nations Global Climate Change conference in Scotland, said when the army “feels the need to defend its land, it does so.”

Presidential statements from Kyiv said he addressed the “security situation” in easternmost Luhansk and Donetsk oblasts in person with U.S. President Joe Biden and Secretary of State Antony Blinken at the environmental conference.

Meanwhile, the U.S. Embassy in Kyiv said on multiple media platforms that “let’s be clear – the Russia-led side has repeatedly deployed howitzer artillery and drones against Ukrainian forces. … Official Russian rhetoric suggesting Ukraine is aggravating the situation is not only misleading, it serves to escalate tensions.”

Despite overwhelming on-the-ground evidence that Russia leads, supplies, trains and fights besides its proxy forces in the Donbas, Moscow has denied direct military involvement in the war, which is in its eighth year.

As recently as November 3, a comprehensive joint report by the European Union and the German government further implicated Russia. Titled “Weapons of War in Ukraine,” the new study “examined recovered weapons and traced serial numbers and other identifying marks back to manufacturers” in Russia, The New York Times reported.

Yet, the Kremlin has insisted the conflict is a “civil war” while denying other aggressions on Ukrainian territory, such as cyberattacks, information warfare, subversion and assassinations.

“Yes, I saw these reports about these Bayraktar drones. One of them bombed one of the artillery positions of the [Russian-led] rebels,” Russia’s permanent representative to the U.N., Vassily Nebenzia, said in New York on October 29. “I think that is a very dangerous game by the Ukrainians.”

The Kremlin, likewise, warned Turkey that its arms sales to Ukraine “threatens to destabilize the region,” whereas Russian-led forces intensified attacks along the 250-mile front line, killing another soldier on October 27 while also employing drones that dropped grenades.

Ukraine suffered two deaths of Ukrainian soldiers in October, and as recently as November 2 Serhiy Yeliseyev of the 128th Separate Mountain Assault Transcarpathian Brigade was killed from enemy fire.

Western publications paid attention as well, noting suspicious Russian military movements close to Ukraine.
The Washington Post in a report on October 30 said that a “renewed buildup of Russian troops near Ukraine’s border” has raised concerns “among some officials in the United States and Europe.”

They pinpointed a huge base in the western Smolensk Oblast town of Yelnya, which is more than 250 kilometers from Ukraine’s border.

Both reports referred to large-scale military exercises that Russia’s military held in April close to Ukraine’s border and which left the war-weary country virtually surrounded.

Ukraine’s military intelligence subsequently addressed the Western media reports by denying their novelty.
Cited by the Defense Ministry on November 1, it said that “no additional transfer of Russian units, weapons and military equipment to the state border with Ukraine has been recorded.”

The statement further added that the information made available was “an element of special informational and psychological actions, and are essentially planned measures to relocate troops after training.”

Still, the Defense Ministry on November 3 cited military intelligence saying that Russia has 90,000 military personnel stationed near Ukraine’s borders and in the occupied areas of Donbas and the Crimean Peninsula, which Moscow forcibly seized in early 2014.

Their production in Ukraine is a “matter of months, not years,” Ukrainian Ambas­sador to Turkey Vasyl Bodnar told the Ukrainian bureau of Radio Free Europe/Radio Liberty on October 31.