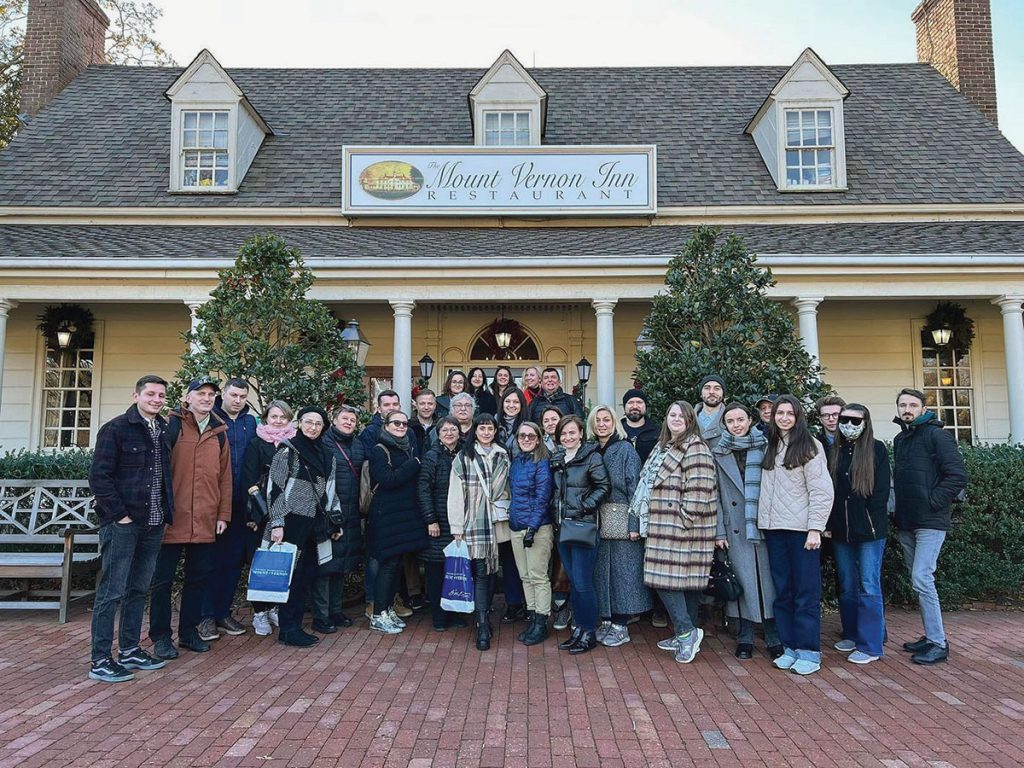 WASHINGTON – Ukrainian Ambassador to the U.S. Oksana Markarova announced on December 13 that plans are being laid for the first Ukrainian restaurant to open in Washington in 2022.

Details where scant but in her address to government officials of both Ukraine and the U.S. at the recently opened Ukraine House in Washington, she touched on the matter.

“As a preview, we are working with an idea that many of you will like,” Ms. Markarova said. “We are working on a Ukrainian restaurant in D.C. This is our plan for 2022.”

The news was met with a roar of cheers from the gathered crowd, which came to attend a formal event in honor of a program held by the Congressional Office for International Leadership (COIL).

The congressional agency administers a unique exchange program which builds bilateral dialogue between Congress and emerging leaders from strategically important countries. At the time of the event at the Ukraine House, the agency was hosting 32 of their Ukrainian facilitators in Washington, many of whom play significant roles in Ukrainian organizations and government agencies.

“We feel like we’re one team. We feel like we’re working together on something in which we both believe. So please consider this house as your house as well. Use it for all of your groups; use it for all your activities. We would always be very happy and honored to have you here,” Ms. Markarova said in her address to exchange participants who took part in the event.

The venue for the event was a beautiful, colonial style, three story building on Kalorama Street. The outside of the building itself was closer to an elegant residence rather than the usual utilitarian buildings of government, hence its fitting name, Ukraine House. The name also alludes to its purpose and mission, which is to serve as a cultural hub of Ukraine in Washington.

There is a similar building in Ukraine: the U.S. Embassy-run America House, located in Kyiv. Much like its American counterpart, Ukraine House has been home to a wide range of Ukrainian government sponsored events, including an exhibition on the Holodomor, cultural instillations and government receptions. In essence, it is meant to be a “home away from home” for many Ukrainians who live in or visit Washington.

In her speech, Ms. Markarova commented on her vision of the role of Ukraine House.

“We are very glad that in addition to our embassy we have an additional place in Washington which we can call home. We have an additional place where we can get together, have fun, share what we Ukrainians love with our American friends, show our songs, paintings, culture, live together or have joyful days together and of course discuss serious matters here,” Ms. Markarova said.

In attendance during the event, which was closed to the public, were a select group of Ukrainian and American figures. High profile figures from Ukrainian society included renowned journalist and public figure Myroslava Gongadze, founder and Director of the Ukrainian Parliamentary Institute Igor Kogut and Deputy Chief of Party at USAID’s Competitive Economy Program Ukraine Oleysa Zaluska.

Among the Americans who turned out for the event were staffers from several Congressional offices, including those from the office of Reps. Marcy Kaptur (D-Ohio), Jeff Fortenberry (R-Neb.), Mike Quigley (D-Ill.) and Bill Keating (D-Mass.).

Also in attendance was Executive Director of the Congressional Office for International Leadership Jane Sargus and her staff, who were thanked by the Ukrainian ambassador for their support of Ukraine.

While not at the event, former U.S. Ambassadors William Taylor and John Herbst had met with the 32 Ukrainians who took part in the COIL program earlier in the day. The group discussed the current situation in Ukraine.

The event comes at a critical time when tensions have been increasing over Russia’s aggressive actions near the Ukrainian border and after a summit between President Joe Biden and Russian President Vladimir Putin. In all, the Congressional Office’s event marked a welcomed a show of support between Congress and the people of Ukraine.