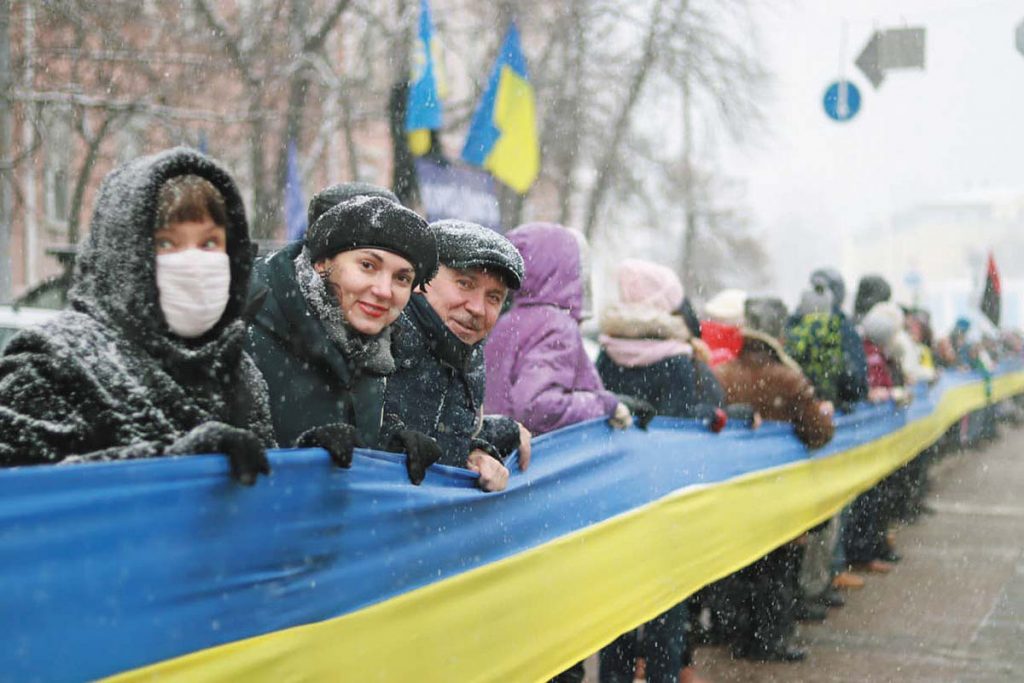 KYIV – Ukrainians marked Unity Day with anxiety and concern that Russia, which has positioned more than 100,000 troops just miles from Ukraine’s border, will once again invade their country.

But the symbolism of the day also brought a degree of calm, solidarity and confidence in the Ukrainian army and the country’s diplomats.

“On January 22, 1919, a solemn event on St. Sophia Square in Kyiv gathered tens of thousands of Ukrainians,” Ukrainian President Volodymyr Zelenskyy said after laying flowers at the monument to Mykhai­lo Hrushevsky, the prominent Ukrainian statesman, scholar and politician.

“The proclamation of the Act of Unification is an important page in the annals of statehood, and now, more than a century later, we understand that the unity of Ukraine is not only about history. It is about our present and future,” Mr. Zelenskyy said.

The Ukrainian president emphasized that the unity of the Ukrainian people is needed now to ensure Ukraine remains a sovereign, independent country.

“This is the basis of our success, the key to a strong, independent state and the restoration of its territorial integrity. This is a fundamental value for us. Let us fulfill our duty to future generations – preserve the independence and unity of Ukraine,” Mr. Zelenskyy said.

A main tradition of Unity Day involves a human chain that connects people across the country.

According to various estimates, between 500,000 and 3 million Ukrainians took part in the event. At that time, Ukraine was still a part of the Soviet Union, and this act of unity helped pushed the country toward independence.

Another human chain of people stretched from Kyiv to Poland on November 29, 2013, when former Ukrainian President Viktor Yanukovych was expected to sign an EU-Ukraine Association Agreement at a summit in Vilnius, Lithuania.  That unity chain of some 300,000 people took place after Mr. Yanukovych’s pro-Russian government announced he would not sign the agreement.

For this year’s commemoration of Unity Day, people from around Ukraine formed small symbolic chains. One small chain took place on a bridge across the Dnipro River in Kyiv. The event’s participants united the two banks of the river with a blue and yellow flag.

Two groups of people began the process of uniting the chain from opposite banks of the river. Drummers were positioned at the head of each column of people, adding a percussive rhythm to the celebration. The column from the left bank of the river represented the Ukrainian National Republic, while the right represented the Western Ukrainian National Republic.

In Zaporizhia, where Mr. Zelenskyy also took part in Unity Day celebrations, more than 1,500 people held ribbons and connected the banks of the Dnipro River across a newly-built, cable-stayed bridge.

“Unity Day is a truly significant event in the history of Ukrainian statehood. It provides two important guidelines for all future generations. If the struggle continues, the united and independent state will be fully restored sooner or later. If true unity is not achieved, independence will be lost,” said Mr. Zelenskyy in Zaporizhia before he joined the human chain.

Mr. Zelenskyy said it was important for Ukrainians to remember and honor the events of 1919. He noted that generations of Ukrainian freedom fighters have worked to ensure an independent Ukraine, and added that all Ukrainians must work to ensure the country’s unity and preserve its independence.

“Our views may be completely different, but they should never be more important than Ukraine, indivisible and independent. Yes, it is challenging. It is not easy to unite. Only a strong nation can be united. Only a united nation can create a strong country that lives, that builds hospitals, stadiums, planes, ships, landmarks,” Mr. Zelenskyy said.

Unity Day was even celebrated with a human chain in Antarctica, where Ukrainian polar explorers joined together at the Academician Volodymyr Vernadsky Station.

“On the day of the unification of Ukraine, polar explorers formed a chain of unity right in the snow tunnel around the Academician Vernadsky station. The participants of the Ukrainian expedition were joined by French researchers currently working at the station,” the National Antarctic Research Center wrote in a post on Facebook.

“In this way, our compatriots, who are now very far from home, wanted to join the traditional all-Ukrainian action of unity and virtually join hands with thousands of other Ukrainians,” the center wrote in its Facebook post. “After all, in Antarctica you are very aware of how unique, beautiful and diverse Ukraine is, and that all of us need to unite to preserve and protect it.”

Ukrainians in Argentina also gathered to celebrate Unity Day. Members of the Ukrainian community in Buenos Aires joked about uniting the planet’s eastern and western hemispheres. The event, which took place in front of the Taras Shevchenko memorial, sought to raise awareness among Argentinians about the threat of another Russian invasion of Ukraine.

“National unity is not only a basic value of citizens, but it is also a prerequisite for successful resistance to external aggression,” the Embassy of Ukraine in Argentina wrote in a post on its Facebook page. “With Russia questioning Ukraine’s very existence and threatening to destroy it, it is important to show that we are united.”

In his speech in Zaporizhia, Mr. Zelenskyy also addressed the Crimean people and Ukrainians living in the temporarily occupied territories of Donetsk and Luhansk.

“More than 100 years ago, the Act of Unification was proclaimed. The parts of united Ukraine, separated from each other for centuries, were reunited,” Mr. Zelenskyy said. “Unfortunately, Donbas and Crimea have been separated from Ukraine for eight years. But for us, this time is like a century. I know we will be together, and I’m not sure if it will take centuries, but it must happen as soon as possible.”

“In Donetsk and Crimea, we will proclaim a new act of unification and celebrate it every year. Some traditions should definitely emerge in the future,” Mr. Zelenskyy said.